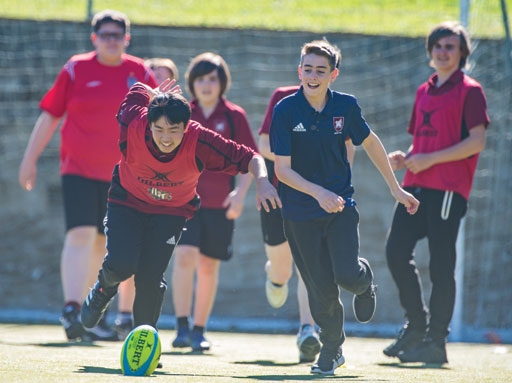 Who are Walcot Warriors?
Walcot Warriors is the South West’s first mixed ability rugby (MAR) team. Launched in 2017, the team now consists of over 35 players from all backgrounds. Most participants have a recognised disability, are from low socioeconomic backgrounds, or are from groups underrepresented in rugby. These individuals are facilitated on their rugby journey by experienced players in a competitive but inclusive environment. This has afforded players a new-found confidence in their social and physical abilities and as a result, players from the Warriors often represent senior rugby squads; are committee members of Walcot RFC; and regularly attend rugby club social functions and fundraisers.

Community impact
Currently, MAR is a growing sport and opposition teams are spread out across Great Britain. Until now, fielding away fixtures has been reliant on the generosity of volunteer drivers, fuel donations from participants, or charity donations. Walcot Warriors is currently building an under 18’s MAR team to supplement the senior Warriors team, which will bring even more underrepresented individuals into our rugby community.

Why the crowdfunding?
This season Walcot Warriors have 22 members with no access to transport, with 15 members coming from low-income families within the bottom 30% on the national scale of deprivation. Having a minibus would provide transport to all players and would greatly benefit those who are medically exempt from driving; do not have the financial means to drive; have no driving parents/guardians; or are too young to drive. Removing the financial barriers to playing away fixtures would allow all players equal opportunity to represent the Warriors on and off the pitch.

How you can play your part
There are four simple ways to help the team reach their target, and make this project a reality.

1. Make a pledge. Don’t delay if you’re going to support because momentum is key to the team’s success!

2. Spread the word. Share the project on your social media pages and tell the world to get behind the cause! The more people reached, the more support received.

3. Offer rewards. Get involved if you are a local business by donating things that can be offered to Walcot Warriors’ supporters. The team will give you a shout out!

4. Create a fundraiser of your own. Use the button on the crowdfunder page to get started. Setting up your own page only takes a few minutes and you won’t need any bank details. Just a fun idea!

Visit the Crowdfunder page to get involved: crowdfunder.co.uk