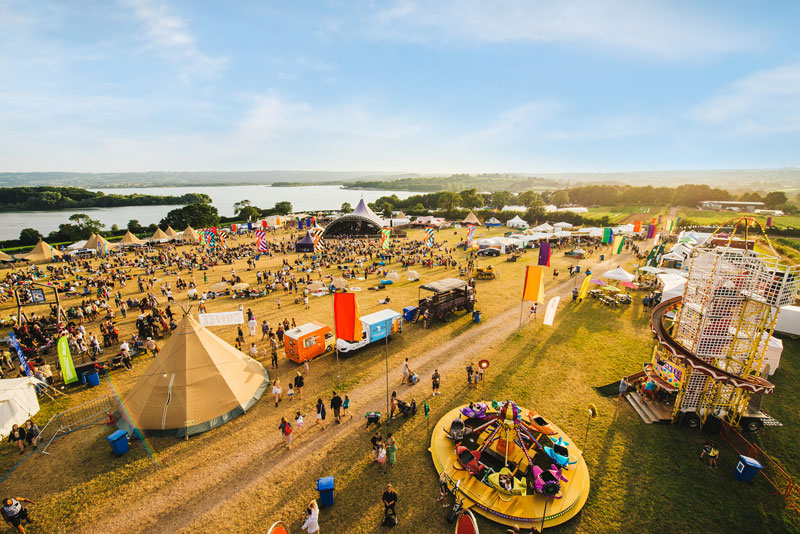 Following the Government announcement on 14th June, Valley Fest is forging ahead with plans to hold the festival between 29th July – 1 August. The team feels confident that the four-week delay and expanded vaccination programme will see restrictions fully lifted on July 19th.

Valley Fest, the best-tasting music festival in the South West, is held alongside Chew Valley Lake, near Bristol.  As well as huge headliners such as Texas, Deacon Blue and Sophie Ellis-Bextor, the weekend also showcases the region’s finest produce: from charcuterie to cheddars and ciders to sausages.

Luke Hasell, Festival Founder says: “It’s going to be close but we’ve come this far, and if safe and possible, we are utterly committed to having everyone back in the field this summer. We expect a Government announcement a week before July 19th to confirm restrictions are being lifted. At this point, we will give you a full and final confirmation that the event can go ahead.”

Now in its sixth year, Valley Fest’s line up has always included some big names as well as plenty of rising stars. For 2021, My BABY, The Allergies, The Blockheads, The Snuts, Toploader, The Cuban Brothers, Beans on Toast and Oh My God! It’s the Church are on the bill. The full line up is on the website: valleyfest.co.uk

Over the weekend you can see: Great British Bake Off stars Chetna Makan and Briony May Williams;Josh Eggleton from Michelin-Starred Pony and Trap, Rob Howell from Root Bristol; chef and author, Olia Hercules named Observer Food Monthly’s Rising Star of 2015.

Additionally, Tom Hunt, author of Eating for Pleasure, People & Planet, is on the bill along with TV’s Andy Clarke who will be highlighting some stunning ethical drinks producers. Not forgetting ‘Queen of the Bean’ food writer and chef, Jenny Chandler, who will be showing how kids can make easy dishes at home.

Culinary heroes and heroines from across the UK will be cooking up a storm day and night in our spectacular open-sided, feasting tipis.

We’re thrilled to welcome Copenhagen’s Empirical Spirits to this year’s festival. Empirical have teamed up with Freddie Jansen, from Dalston’s Snackbar to open the festival with a very special feast. On Friday night you’ll be able to enjoy Freddie’s Mexican sharing feast, paired with an exclusive range of Empirical cocktails. Expect finger licking taco, chiccarones, sharing platers, all paired with four delicious cans or cocktails from the Empirical range.

Josh Eggleton, together with Rob Howell from Root Bristol, will be making dishes from Rob’s new cookbook on Saturday. While Toby Gritten of The Pumphouse Bristol, offers a very special Sunday lunch feast, paired with a brilliant Bloody Mary from Bloody Drinks, with every ingredient on the plate sourced from within the Chew Valley.

New for this year: a live-fire stage! Showcasing the best ingredients from Wales and the South West, with plenty of laughs and delicious tasters to boot. The line up includes Sam Evans and Shauna Guinn from Hang Fire Southern Kitchen and chef Henry Eldon of The Cauldron Restaurant. Plus eco-chef and UN World Food Programme Ambassador, Arthur Potts Dawson.

Expect treats, beats and plenty to eat with lots of Somerset style and sizzle. From feasts to more street food than you can shake a stick at, there will be something to tickle everyone’s taste buds and suit every budget.

Valley Fest takes place in one large meadow making it perfect for first-time festival goers and families of all ages. People often remark how easy it is to get around – no long hikes across fields or hours of losing your friends. In fact, part of Valley Fest’s appeal is the lazy lakeside vibe. Not only that, you can drop in on poetry, storytelling and comedy sessions.

The festival is held on an organic farm so looking after the land is part of its DNA. Whether that’s through talks on soil health, wildlife-friendly gardening, farm tours or via panel discussions on regenerative farming, there is a host of fascinating and progressive topics to choose from. The festival was founded by Luke Hasell, an organic farmer who inherited the land after his parents suddenly passed.

Safety is paramount. A number of changes have been made to the running of the festival to ensure that Government guidelines will be followed. For example, there’s an extra field this year, so should social-distancing rules still be in place we have more space. We are going cashless to reduce queuing and we have redesigned the site so that there are no enclosed, tented venues and plenty of ventilation in any covered areas. In short, we are planning for all eventualities.Expect hedge-to-hedge Somerset sparkle and plenty of nonsense with a spectacular soundtrack.

Adult weekend tickets are currently £175 (plus booking fee) and can be bought from valleyfest.co.uk.  When these run out tier 5 tickets will be priced at £195. Should the event not go ahead, ticket holders will be offered a rollover to 2022 or refunded.