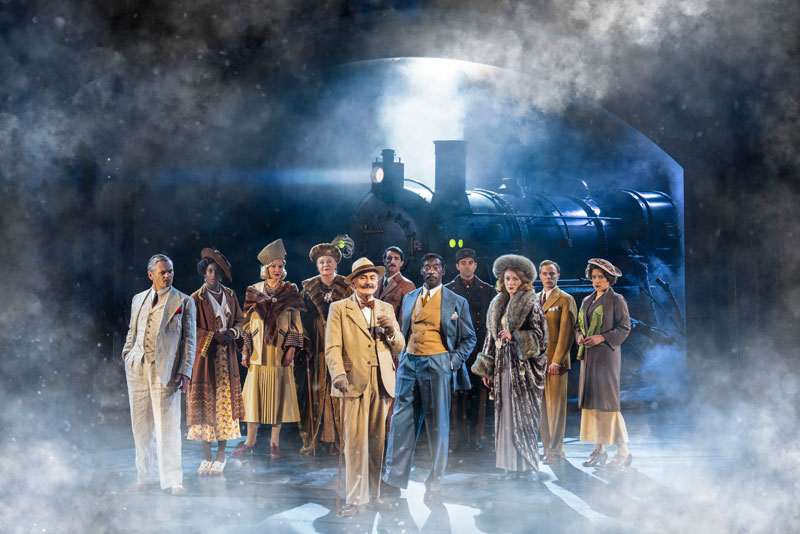 What have Dracula, James Bond, Doctor Who, EastEnders‘ Den and Angie Watts, Danger Mouse, Minder, the Teenage Mutant Ninja Turtles and the grand illusionist David Copperfield all got in common? They’re just a handful of the characters who have all, in their various ways, boarded the iconic Orient Express and used it as a luxurious, opulent backdrop to various shenanigans and capers to various degrees of success/ridiculous hilarity depending on your cultural tastes.

But despite the best efforts of all of them, you can’t say the words ‘Orient Express’ without immediately making the connection with Agatha Christie’s 1934 novel, the 11th of 33 to feature the undisputed master of the art of methodic abductive reasoning Hercule Poirot, set on that legendarily elegant train.

Having had his exotic winter travels interrupted by an urgent call from London, the idiosyncratic Belgian sleuth needs to travel back from Istanbul to Calais post haste. Despite it being the depths of a bleak midwinter, the train is unusually busy; how fortunate, then, that Poirot’s old friend (and train manager) Monsieur Bouc can pull a few strings and plonk Poirot in a first class berth. How unfortunate, though, that there’s a Very Nasty Character among the super-glamorous passenger list. But by the time the train screeches to a halt, marooned by a snowdrift in a remote area of Yugoslavia, that VNC has suffered death by multiple fatal stab wounds – and it’s time for Hercule to do his thing.

Now that we’re all armchair experts on the grubby, gritty, ‘real-life reality’ of gory Netflix crimes and the people who solve them, can a good old-fashioned murder-drama feed our fascination for felony? If you get on board with Theatre Royal Bath’s Summer Season Artistic Director Jonathan Church’s deluxe, flamboyant convoy, that particular conundrum is very speedily solved in the affirmative.

It surely can’t be easy to take on the role of Christie’s most eminent leading man when an illustrious roll call of actors including Albert Finney, Peter Ustinov, Orson Wells, John Malkovich, Kenneth Branagh and, of course, David Suchet have all been there and done it before you; in a similar fashion to how actors offered the role of James Bond must feel, there must be a sense of walking in somebody else’s shoes and hoping you can fit them to your feet. But Henry Goodman has slipped into Poirot’s shiny patent spats very comfortably indeed, putting his own subtle spin on all the peculiar foibles, tics and mannerisms that Christie so carefully imbued into a character that so many of us know and love today despite Christie, towards the end of her career, referring to him as an “insufferable, detestable, bombastic, tiresome, ego-centric little creep”. Okay, so he’s a strange little man, plagued by all manner of obsessive-compulsive disorders that couldn’t really be called appealing. But Goodman’s Poirot is uniquely emotive and touchingly endearing as he activates those ‘little grey cells’ to solve the most difficult case of his career… a case that ultimately forces him to question his deepest beliefs.

Elsewhere, Laura Rogers is a shimmering, enigmatic Countess Andrenyi, Sara Stewart a brazenly brash Helen Hubbard and Joanna McCallum a deliciously haughty, Maggie Smith-esque Princess Dragomiroff – oh, the list of name checks could go on and on as each member of the flawlessly tight ensemble contribute character and intrigue to the complicated plot in equal measure, presenting a united front of a dozen glamorous, impeccably-dressed suspects toying, tantalising and trifling with our own suppositions as Poirot pulls every last tiny scrap of evidence together to reach his dazzling denouement – and the fact that the resolution still moves to astonish even if you know whodunnit all along is further testament to Goodman’s magic.

Talking of magic, full credit must also be given to designer Robert Jones’ suitably swanky set, complete with the presence of the nose of a full-scale locomotive smoking and hissing behind scenes that move us from grand hotel lobby to the bedtime berths, dining cars and bars on board the stately vehicle itself– if you’re in the mood for a grand theatrical spectacle, you’ve come to the right place.

For those of us who still don’t know who actually dunnit, there be no spoilers here; let’s just say that there are no spurned lovers or vengeful ex-staff to point the finger at. But neither is there a complicated, psychopathic detective with his own ‘dark’ history of violence to contend with solving the crime for you; considered in that context, it could be said that Murder on the Orient Express actually offers a much more realistic, humane analysis of the sorry circumstances surrounding a suspicious death than a Netflix box set binge ever could – and no better conquering hero to guide you along the journey.

Featured image: Henry Goodman as Poirot and the company | All photography by Johan Persson