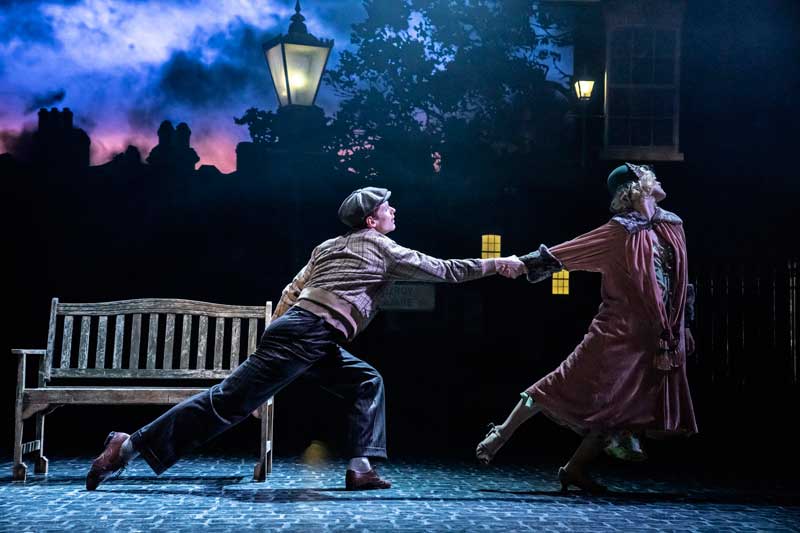 When British writer Patrick Hamilton wrote the introduction to his 1929 novel The Midnight Bell – one-third of Hamilton’s trilogy of semi-autobiographical novels that form his 20,000 Streets Under the Sky collection – he had no idea that, 92 years later, the UK’s most popular, imaginative choreographer/director Matthew Bourne OBE would read those words, assemble his groundbreaking, multi-award-winning British dance-theatre company New Adventures… and dance Hamilton’s trilogy back to life.

An evening at The Midnight Bell could hardly be described as a spirit-lifting experience; expect desolation, despondency and despair; forlorn flirtations, unfulfilled desires, thwarted passions – and little solace to be found in the bottom of the speedily drained glasses.

Nowhere near as lavish as Bourne’s Big Productions (The Midnight Bell has far more in common with the company’s Early Adventures than it does with Swan Lake), The Midnight Bell may be his most artfully intricate, exhaustively technical work to date.

Barman Bob is infatuated by Jenny, a beautiful good-time girl who’s never going to commit to a young, penniless pup, regardless of how pretty he may be. Reticent, reliable barmaid Ella, however, is in big lurve with Bob… but, knowing she can’t compete with Jenny for boyish Bob’s affections, considers settling for less. Lonely (and, judging by her countenance, rich) spinster Miss Roach falls foul to the charms of scoundrel Ernest; glamorous out-of-work actress Netta is in a weird, co-dependent, dysfunctional relationship with the semi-demented, clearly tormented George; West End chorus boy Albert is in love with a mysterious man who, despite alluding to returning his affections, has good reason (given the era Hamilton’s novels were published) for keeping things cryptic.

And, every step of the way, the Bourne beat goes on, set against a backdrop depicting a silhouetted twilight skyline of 1930s Soho, tea at a Lyons Corner House, various seedy rooms-for-rent and, of course, The Midnight Bell itself, and driven by a soundtrack blending Terry Davies’ richly atmospheric score with sound designer Paul Groothuis’ subtle but insistent blasts of urban thrum, with era-specific greatest hits by the likes of George and Ira Gershwin, Cole Porter and Irving Berlin – the vocals meticulously lip-synched by the cast at pivotal moments – adding further context.

You certainly don’t have to understand dance – whatever that means! – to get drawn into The Midnight Bell

The characters, meanwhile, are bought eloquently to life by the company’s almost supernaturally gifted dancers. We learn all we’ll ever need to know about Bryony Harrison’s Ella merely from how firmly she pulls her dowdy hat on when time is called at the bar; we can’t take our eyes off Michela Meazza’s tightly wound, sculpturally elegant Miss Roach even when she’s just powdering her face in a quiet, dimly lit corner; Bryony Wood’s Jenny oozes earthy-but-cynical, seedy sexuality with an undercurrent of sincere sensuality; Richard Winsor’s tortured, anguished George offers a palpable depiction of schizophrenia; we know from a mere raise of an eyebrow that Ernest Ralph Gorse’s Glenn is one nasty, scheming piece of work; Liam Mower is by turn fabulously fey and deliciously determined as Albert… and on and on we go, bounced along on wave upon wave of perpetual connect/disconnect, tangle/untangle, humour/tragedy, wit/melancholia, hope/despair, darkness/light. As glass after glass of hard, hard liquor is drained and cigarette after cigarette is stumped out, hangovers and broken hearts are suffered, recovered from, and suffered all over again.

As Matthew Bourne told us in our recent interview with him prior to The Midnight Bell opening in Bath, “You certainly don’t have to ‘understand’ dance – whatever that means! – to get drawn in to The Midnight Bell”. And nor do you have to ‘understand’ the characters, either. But, once drawn in, the memories of this particular night down the boozer will never leave you.

And no morning can ever top the morning after a night in the company of Matthew Bourne.