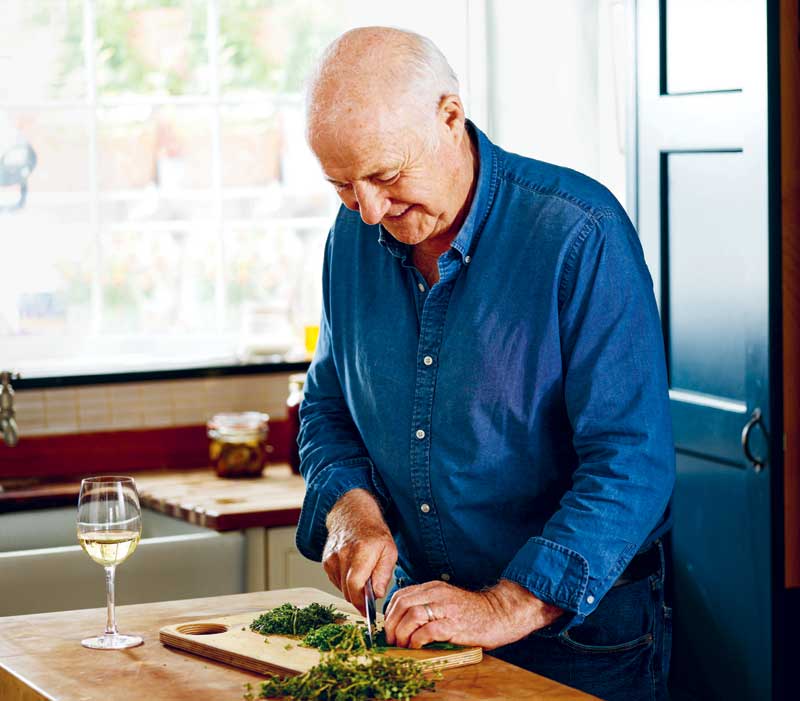 Serious about cooking: an interview with Rick Stein

Celebrated chef, restaurateur, author and television presenter Rick Stein has 10 award-winning restaurants in the UK and has written over 25 cookery books. He talks to Melissa Blease about his latest book, Rick Stein at Home

Doing a Delia, rustling up a Jamie, trying to be Nigella, going Yotam, getting a bit Gordon: we’re so familiar with the UK’s most celebrated celebrity chefs that the mere mention of their first names alone is a fast-track shorthand to letting your friends or family know what kind of menu you’re planning for supper. But Rick Stein CBE – arguably one of the country’s most successful chefs of all, as well as a prolific cookery writer, charismatic TV superstar and award-winning restauranteur – has somehow managed to avoid lending himself to Instagram/ TikTok/Snapchat parlance.

Think about it: last time you made one of his seafood risottos, or fish curries, or shepherd’s pies, you didn’t say you’d “rustled up a Rick” or “slung together a bit of a Stein”, did you? Nope! Because if you don’t call Rick Stein by his proper name, it just doesn’t sound… well, proper.

This can’t have happened by accident: a man with a portfolio that includes ownership of 10 award-winning restaurants in the UK (and two in New South Wales, Australia, where Stein has a semi-second home) alongside almost 30 cookery books and multiple globetrotting TV series whilst cooking for The Queen and Prince Philip, Tony Blair, Margaret Thatcher, Jacques Chirac and Indian Prime Minister Narendra Modi along the way can’t have inadvertently missed any kind of business-related trick. But neither is it down to design: a master of the art of self-deprecation with a genuine, twinkly smile and the personality of a kindly uncle isn’t the kind of guy who created a master plan for his public persona. As familiar as we are with the instantly recognisable character who has been at the forefront of the domestic kitchen zeitgeist since he was first introduced to our homes as a guest on his mentor Keith Floyd’s 1985 BBC TV series Floyd on Fish (when Keith accidentally referred to Rick as Nick several times and everybody thought it was a hoot), he remains something of an enigma. So Rick Stein, help me out here: describe yourself in three words.

“Inquisitive!” he says, without missing a beat. “And a bit of a perfectionist. And actually, incredibly self-critical; I’m generally easy going, but in terms of cooking, I’m always thinking I could do better. But that’s not to say I beat myself up – to the contrary! Thinking I could do better is therapeutic because it’s a constant reminder, to me, that you need to be serious, actually, about cooking. Even though I could easily say, in the same breath, that cooking shouldn’t be too hard, I feel you should always intend to create something really lovely, and the only way to do that is to be aware of how easy it is for things to go wrong.”

To me and millions of others like me, Rick (yup, I’m going for it) couldn’t possibly add the merest hint of essence of wrong to his recipe for success. But despite the easy smile and the ineffable, irrepressible sense of humour, Rick has always come across as a deeply thoughtful man with scant regard for ratings, status or fashionable hit lists – which is why his response to the inevitable question regarding how lockdown was for him comes as no surprise.

Thinking I could do better is therapeutic because it’s a constant reminder, to me, that you need to be serious, actually, about cooking.

“In one way, I really enjoyed the lockdowns; I have such a busy life, and I was suddenly given a chance to sit down and think about where I’d been, where I was going and where I was up to,” he says. “That’s where the idea for the new book came from, really; I sort of started cooking again in a proper ‘at home’ way. I’ve always cooked at home, always – I love to cook for family and friends. But suddenly I had plenty of time to reconsider making things like preserves, and sourdough, and just thinking about what cooking means to me as a human being rather than as a restaurateur, or a TV presenter. I found that very rewarding.”

The results are very rewarding for us too. Described by publisher BBC Books as ‘recipes, memories and stories from a food lover’s kitchen’, and by Rick himself as “a glimpse into the rhythms and rituals of my home cooking”, Rick Stein at Home is one of those books that will become as much of a sauce-splattered, note-scrawled old friend on the kitchen shelf as it is a take-to-bed cosy-up read for folk whose kitchen skills don’t extend far beyond reheating a shop-bought pie (although even those people may be moved to expand their horizons after digesting Rick’s recipe for Cornish Bouillabaisse.) But on reading Rick Stein at Home, I can’t help thinking… is it a cookery book, or a memoir?

“I suppose you could almost call it a cook’s memoir really, which is one of the many reasons I’ve enjoyed writing it,” says Rick. “But I didn’t take it too seriously, on purpose – there are parts of the book which are a bit frivolous, such as when I’m describing all the gadgets that end up in my garage, and it’s almost like Toy Story; they talk to each other and say, ‘what happened to you, then?’ I didn’t want to make a serious deal about cooking at home; I just wanted to create the atmosphere of what it’s like for me, and what it’s like for my family. So on one level it’s very personal, and sometimes I wondered, maybe that level of personal is just not relevant? But I’ve faithfully recorded what was going on around me at the time of writing and, I hope, found a way to make that interesting – and that’s the best I could do.”

But we know from Rick’s career to date that when he uses the words “the best I could do”, there’s still a lot of best to come. Go on, Rick; you may be concentrating on sharing your new book with us right now… but tell us a bit about the pipeline plans that we know for sure you’ve got.

“The one cuisine I’ve yet to fully explore is Chinese,” he says. “I’ve done one programme in China and bits and pieces in Hong Kong, but there’s so much about Chinese food that I don’t understand – it’s such serious cooking! I still have much to learn about Indian food too, and I love the process of discovery; before my 2013 exploration, I’d done a few curries mainly on the back of trips to India with my family, but doing a whole book, and really trying to understand Indian food and how it worked… wow! But I absolutely love – and I mean, love – Italian cuisine, so hopefully my next voyage is going to be Italy. Again, I’ve filmed a lot there already and I’ve done a lot of Italian recipes but I want to know more. The simple question about Italian food that, for me, remains unanswered is why, exactly, is it so good? I want to go to every part of Italy in order to find the answer to that question!”

Suddenly I had plenty of time to reconsider making things like preserves, and sourdough, and just thinking about what cooking means to me as a human being

Mamma Mia! When he does, we’ll be eagerly awaiting the results. But Rick: is it possible to say what, out of all that you do, is your biggest passion: cooking at home, cooking at the restaurant, writing, presenting, travelling…? “I’ve come to realise that the only things that really interest me in life are food and cooking, in any and every context,” he laughs. “If you want to really engage me in serious conversation, talk food: that’s where I want to be. I’m always really amazed at – and in awe of! – people such as my wife Sarah, whose constant thing in life is talking to other people. She loves people, she’s deeply interested in other people, she remembers names, birthdays, everything about them – I can’t believe how big a memory she’s got. But then I realise, if you want to talk at a very deep level about pomegranates, or spice, or avocados: I’m your man! And that, overall, is my thing. Food: that is what I do.”

Yes indeed, Rick Stein: Food Is What You Do – and we want to do it like you do, too. So, what’s for supper this evening? I’m going to rustle up a Rick.