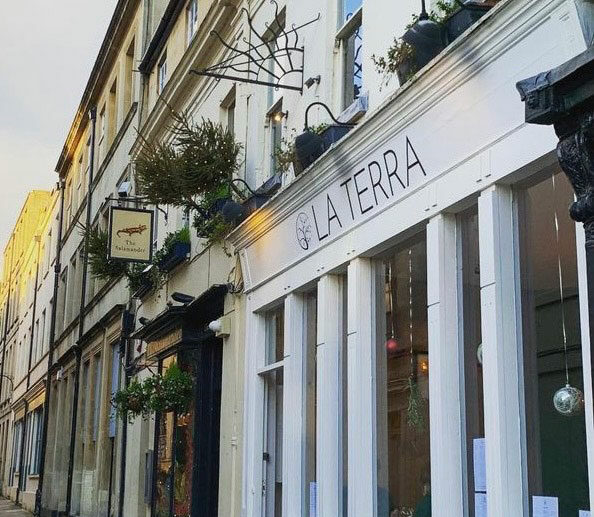 There’s a new Italian gastronomic experience in town – called La Terra it’s one to pay serious attention to. First opened in November last year, it’s a collaboration between two Italians, restaurant manager Vito Scaduto and chef Alessandro Scola. The Bath food scene is intimately familiar to both. Most recently Vito implemented and oversaw a restructure at Clayton’s Kitchen (recommended as the top eating destination in Bath by the Evening Standard’s Best City Breaks in the UK guide) and it was here that he met and worked with Alessandro as head chef. Vito was also previously restaurant manager at The Bath Priory and the Three Gables in Bradford on Avon.

Alessandro, who is from Lake Como in northern Italy, tells me he spent his childhood surrounded by people cooking real Italian food, including making fresh pasta with his grandma, and that he was destined to work as a chef. His aim at La Terra is to create the Italian tradition within a British product, with a strong emphasis on local produce.

The lights from the restaurant in St John Street – previously Firehouse Rotisserie – glow invitingly from the outside. It has been refurbished with a light touch, the main restaurant soft and welcoming with grey slab tables, wood panelling and a bold viridian wall, with the open kitchen at the back shining in stainless steel glory as the kitchen staff shift and chef behind it.

For Antipasti arrived fresh Italian burrata, red endive, fig purée and pine nuts, and zuppa, a Jerusalem artichoke and chestnut soup with Tuscan toasted bread. This was not chosen as a safe option – I am partial to artichokes – and the actual dish performed way above the standard allure of a warming soup, with the mild nutty flavour of the artichoke blending smoothly with the chestnut. My next dish was leek and gorgonzola risotto with walnuts and white truffle oil from the Primi menu (see above centre) and I dare anyone not to be comforted by its warming, dwelling, flavoured textures. My companion chose the pescato, grilled Brixham seabass with vegetable concasse and shellfish sauce and was seduced by the delicate flesh and mild, sweet flavour, served with swede and sage mashed potatoes.

Another option on the Antipasti menu was capesate – hand dived scallops, ricotta mousse, pistachio and shellfish sauce – and lo and behold the said scallop dish arrived courtesy of Vito for our delectation. I tend to avoid seafood after a reaction many years ago, so may not have chosen this independently, but the sweet, buttery flavours held me firmly in their lure.

Options for Dolce featured some Italian classics: tiramisu; vanilla panna cotta with pear compote; and eggnog mousse with blueberry and hazlenut praline. It was the lemon posset, lemon curd, yogurt and pine nut crumble (see above right) that settled itself in front of me, tantalising my tongue with its rich combinations of creamy and nutty, bitter and sweet. My companion went for Formaggi, with a choice of four cheeses – Taleggio from Lombardy, Pecorina al Fieno from Tuscany, Ubriaco Rosso from Veneto and Robiola from Piedmont – from which you could choose two or three, served with biscuits, grapes and wildflower honey.

Our food choices for two came to just over £100 (without alcohol), which I’d say was impressively good value for the fine dining experience to which we had been treated. The panache and delicacy of the food here is a real revelation, a diamond, as it were, hidden in St John Street; it’s not surprising giving the culinary experience of those running it, and I recommend a visit.