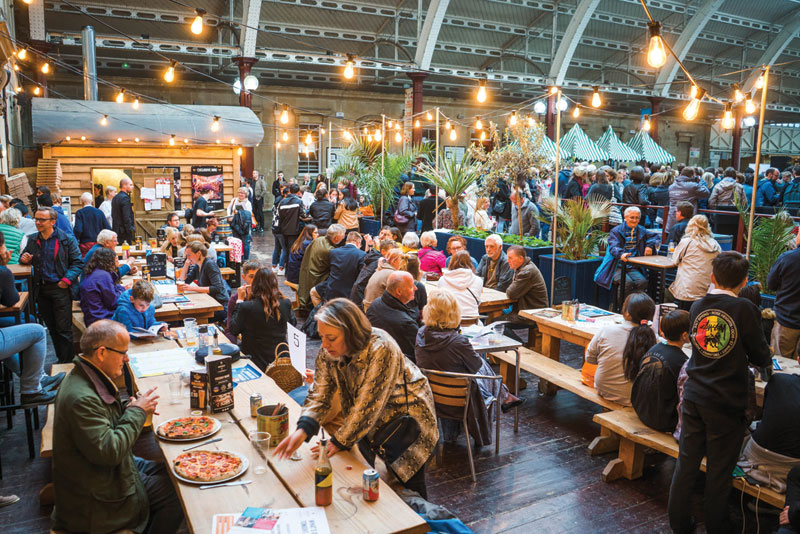 Everyone loves a pizza and you can always rely on a freshly made one – with gluten-free, vegetarian and vegan options – to eat in a chilled out atmosphere at the Bath Pizza Co, says Emma Clegg.

Green Park Brasserie in the old Green Park Railway Station is a veritable institution, serving since 1992 a fusion of French-inspired and modern British cuisine that also absorbs food inspiration from across the world. The launch of sister business the Bath Pizza Company in 2016 was a development that embodied the food fusion theme, with a wood-built centre of operations in Green Park that focused on the Italian pizza, a food made with dough, tomato sauce, cheese, and toppings that’s now beloved across the world.

This casual dining pizza place – seating up to 150 on tables on heated terraces – offers not only delicious-tasting pizzas, but live music and entertainment within the scenic station architecture. (Don’t miss the Harlem Rhythm Cats at Bath Pizza Co on Friday 26 August, from 6–9pm for a big evening of alfresco dancing, live music, cocktails, fizz and more.)

Everything is freshly made to order. On the menu are a selection of classics including Pepperoni, Hawaiian, Ham and Mushroom, American Hot, Tuna and Capers, Chicken and Pesto, and Meat Feast. And an impressive selection of vegetarian and vegan pizzas, ranging from Truffle and Goat’s Cheese with a white base, Tiger Margherita with a Sesame Tiger crust and Spinaci, with ricotta, spinach and artichoke, and you can also choose gluten-free dough.

If you want a more personalised pizza, then you can also create your own for £12.95, starting with a classic Margherita and adding three ingredients of your choice (or more for £2 each).

Expect the best because the Bath Pizza Co landed second place in the UK rankings after competing at the National Pizza Awards at the end of last year, for which head chef Jonah Pole in the Cook-Off produced their signature Spinaci with a Cheeky Egg oozing from the middle. That’s going to be my choice next time!

The Bath Pizza Co is open from 12–10pm, Monday to Sunday