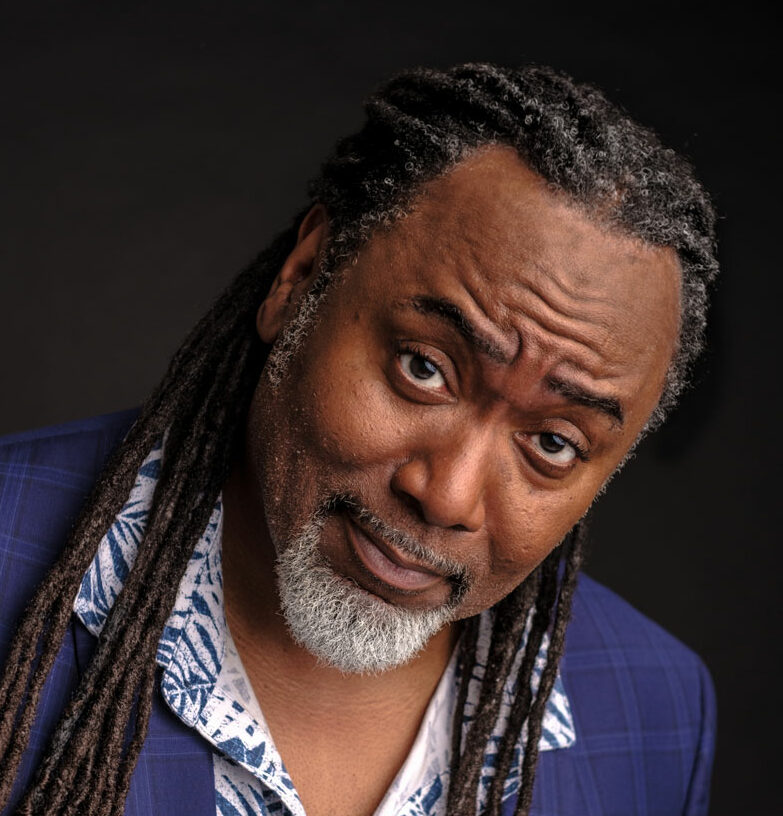 Not being Uncle Fluffy: in conversation with comedian Reginald D. Hunter

Emma Clegg (aka Ma’am and Sugar) talks to comedian Reginald D. Hunter – who is appearing at Americana Fest in July – and veers from hysterical laughter to profound sadness, in the process discovering the definition of soul.

When I ask Reginald D. Hunter whether he likes to be called Reginald or Reg, he tells me, “Ma’am I’m not particular about that sort of thing – my ego tends to lie in other places.” A little nonplussed at being called ‘ma’am’, I feel none the wiser, but see I’m in for a cracking interview.

I find when talking to Reginald that the wording of my questions is as important as his answers. This is not a case of feeding someone a subject; he’s paying real attention, and what’s more he has a turn of phrase – in that attractive Deep South drawl – that makes me want to include everything verbatim. I ask how he has liked being back on stage after the lockdowns, and comment that I think it’s been particularly hard for comedians in isolation because they crave attention more than the rest of us.

“Well I think there are a fair few presumptions in that question,” says Reginald. “I’m pleased to be back working, but it’s not like I’m doing somersaults because it’s not the way it was. And there are still comedians who are struggling to get audiences. And craving attention – I have come to find that people in my personal life don’t need you to be funny. That guy on stage, that’s the last guy they need.” That’s my assumptions unpicked then.

Reginald came to the UK 21 years ago to study at RADA, thinking his career lay in acting, but discovered on stage that he made people laugh, so carried on doing so. I ask what his first impressions of the UK were. “The first serious impression I got when my train got from Gatwick to Victoria Station was seeing a lot of Goths walking around, and I thought, ‘Oh so it’s going to be like this’. It looked busy and it looked impersonal. I come from a town where people say ‘good morning’ to strangers. People don’t do that here, and it took me a good 2–3 years not to take that personally.

“Northerners are not quite so bad, but you know the British – generally they are not the warmest ms. The difference is, I think, that northerners, once you put a pint in their hand, they loosen up and they become, you know, real.

“I had a buddy back in the States, he came over and he said to me, ‘I don’t smoke with English people no more.’ And I said ‘Why?’ He said ‘They don’t smoke right’. I said ‘What do you mean?’ He said ‘Back in Georgia we smoke to get high or get silly or have a laugh, but over here when y’all smoke you want to talk about art and the EU.” Reginald belly laughs at length.

I say that Reginald has a very confident presence on stage and ask if he’s had to work on this. “Well, I can only talk about people’s perceptions because whatever I’m doing that looks and sounds authoritative, in the midst of it, it doesn’t feel that way.

“I give my parents credit for my physical confidence. My parents made sure that they spoke to us and discussed things with us and listened to our day. And what that did to me and my siblings was it made us expect to be heard when we spoke.”

Soul does not come from blackness. Soul comes from having to strive, having to go without, having to look up at somebody and have somebody on your neck

I note that he has often included observations about British sarcasm and subtext and ask if living in the UK has made him less direct. He responds, “You know ma’am that’s probably the best question that I didn’t see coming. You landed a good one there, sugar. You made the old man stagger a little bit.” That gave him some thinking time.

Reginald has had controversy in the past to do with his directness on stage. “I worry about pulling too many punches because of all the new trouble that comedians can get into. And I worry that I don’t want to become ‘Uncle Fluffy’ on stage. Whenever you want people to like you and you don’t want to be scared, you turn into Uncle Fluffy. Americans pride themselves on how much they get in your face. English people pride themselves on how much they didn’t say, but still manage to get their point across. “I certainly think that my people in Georgia could do with a big dollop of English tactfulness. You know, why use a missile when a firecracker will do?”

In past routines Reginald has often observed the British over-sensitivity about racism. (The man in a nightclub who bumps into a black man and apologises for not seeing him. “I think I might have been racist,” he says. “Did you have poison in your heart when you said that?”, Reginald asks.) When I ask about this, he tells me it’s less apparent now. “In the last five years or so, as American cops seem to be shooting black men in the head more, that seems less of an issue.”

Reginald has an astonishing knack of moving from creating laughter about serious issues to giving profound comments about them. When I refer to the Colston statue being dumped in the harbour during the #BlackLivesMatter movement, Reginald says, “I have mixed feelings about that. I believe that a substantive change is going to happen, the changing of laws, and the way we conduct business.

I worry that the people on my side, the so-called old school leftie liberals, we need the opposing side. And we have to find a way of convincing them without constantly trying to put a scar on their face.”

Interestingly Reginald has a strong following in Ireland and I ask why he thinks this is. “There is a natural affection, because I’m not accustomed to running into large groups of white people where my blackness is a non-issue. Not pro or against, but a non-issue. It’s refreshing.

“A white boy once came up to me after a show and said ‘Why do black people have so much soul?’ I said, ‘Oh, that’s very sweet of you but soul does not come from blackness. Soul comes from having to strive, having to go without, having to look up at somebody and have somebody on your neck. So that’s why Irish people have soul. Because soul comes from striving. It’s the reason why privileged people can’t have soul. Soul is at the cost of privilege.”

Reginald’s father – who died in 2021 at the age of 102 – he once described as the funniest person in their family­­­­. “The old man was Georgia to me. I’m sure I’ll see Georgia again, but I’m not in a hurry to see Georgia without the old man being in it, I reckon.”

I ask what Reginald has planned for his appearance at Americana Fest on 1 July. “I’m a gonna tell you ‘I don’t know’. But between now and Friday is a long way to go without having some new opinions. By the time y’all see me I should be firing from all machines of comedy.”