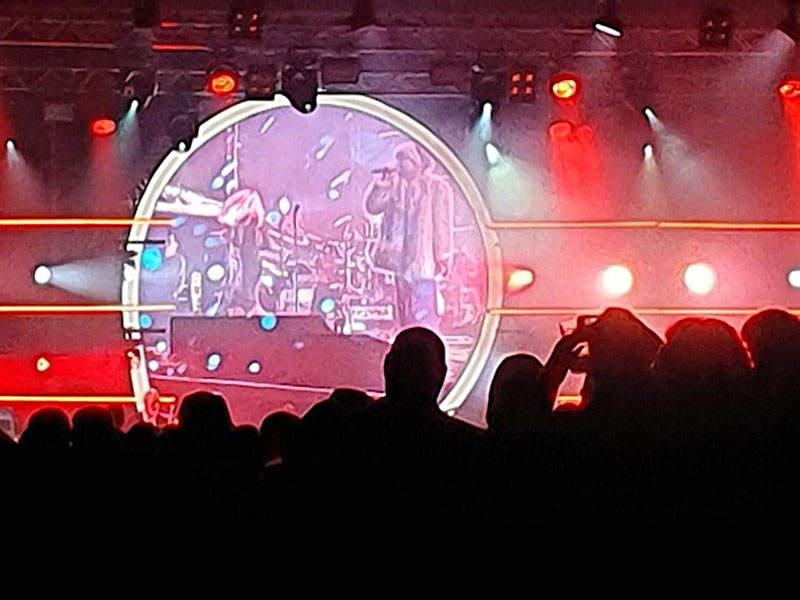 Properly charismatic frontmen (as in, those almost other-worldly characters who own a stage and hold an audience in the palm of their cool, cool hands) are thin on the ground these days; relatable, accessible, innocuous and “I am one of you” seems to have taken over where compelling, flamboyant, grandiose and “there is most definitely only one of me” left off. In the 2020s, bland is the new bewitching and insipid rules the (air)waves – which is part of the reason why headline acts that first trended before we even knew what ‘trended’ meant are trending right now… with James (and their properly charismatic frontman Tim Booth) being a case in point.

Formed in Manchester circa 1982, James went on to secure a higher-echelon position on the Madchester/ ‘Second Summer of Love’ scene that dominated the late 80s/early 90s. Nowhere near as blokey as Happy Mondays, much less shambolic than The Stone Roses and never as electro/acieeed as 808 State, James were uplifting, and melodic, and intelligent… and sounded a bit like you’d imagine Percy Bysshe Shelley, Henry Miller and Roald Dahl would have sounded if they’d ever time-warped and been in a band together.

Frontman Tim Booth left James in 2002 to pursue a solo career but the band subsequently reformed five years later, refreshed, de-stressed and ready to rock again. According to Booth, James is still very much a collective effort; he recently told a Guardian journalist that “song lyrics are nothing without music; credits are conceited, and creativity is communal”. But it has to be said that, without their excessively energetic, shamanic dancing, fur coat-wearing, hypnotically engaging frontman, James’s live gigs wouldn’t be even close to half as euphoric as their recent Bath Racecourse proved they still are. But was the experience a nostalgic timepiece, or a trip down memory lane for ticket holders of a certain vintage? Most definitely not.

Of course, we were given the opportunity to shimmy or bounce along to some of the band’s greatest bygone days hits from a suitably sparkling outing for She’s A Star (the first single from their 1997 album Whiplash) as one of the opening numbers to the inevitable early 90s hit Sit Down (probably the band’s best-known anthem despite it being, to my mind, little more than a plodding nursery rhyme that most definitely doesn’t represent the band’s overall oeuvre very well at all) which was saved for the encore.

But along the way, old met new as tracks from the band’s latest album All The Colours Of You (their 16th studio album to date) sat comfortably with James’s huge back catalogue, showcasing a new-found maturity and depth that nevertheless aligns with the foundations of the band’s original opulent jingle-jangle. The album’s title track, inspired by the Covid-19 pandemic and starting with the distinctly non-upbeat line “we’re all going to die”, may be laden with intensity but it still adds optimistic vigour to proceedings; Beautiful Beaches is a denunciation of climate change that ultimately focuses on promise.

Elsewhere, the evocative depths of the band’s mellower lullabies including Born of Frustration (from their 1992 album Seven), a paired-down yet still sublimely lush version of Say Something and the dramatic murmur of Out To Get You (both from their pristinely beautiful 1993 album Laid) offered respite from the exuberant shanties that just kept on coming. By the time another vintage James‘ hit Come Home waltzed around (without – rather surprisingly, given the setting – an airing for Sometimes (Lester Piggott): their upbeat, 1993 euphony apparently inspired by the iconic jockey’s racing pace), it was indeed time to go home, the old duffers smiling beatifically while all around us, younger members of the audience instagrammed and hashtagged like crazy… keeping James (and that properly charismatic frontman) trending all over again.