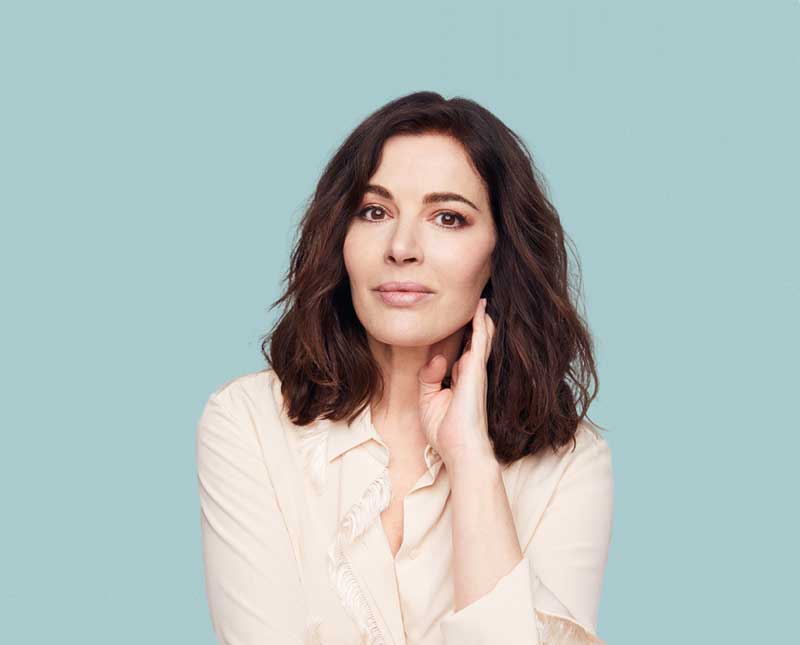 In conversation with Nigella

What do you ask a domestic food goddess who has been at the top of her game for decades? Melissa Blease does all the work for us, ahead of Nigella Lawson’s appearance at the Bath Pavilion on 25 November

As the UK’s pandemic crisis reached a ‘critical stage’ on 29 October 2020, Boris Johnson introduced lockdown 2. Across the country, redundancies were reported to be at their highest level since 2009, October had officially been declared the wettest in Britain since records began… and it was announced that the Strictly Come Dancing Halloween special was cancelled. But just when we were beginning to think that it really wasn’t worth getting out of bed, Nigella Lawson’s latest book Cook, Eat, Repeat floated into view, offering a beacon of light in the midst of all the gloom.

As October rolled into an equally gloomy November, December and on, the nation took Nigella’s hand as she guided us through an array of accessible, inspirational recipes from Appelflappen to Winter Trifle by way of Fried Chicken Sandwiches, Crab Mac’n’Cheese, Norwegian Pork Ribs, No-Knead Bread, Basque Burnt Cheesecake and much, much more. The mighty, 330+ page tome that offered succour, sustenance and sensuality, not only uplifting our spirits but offering a fresh perspective on the very meaning of food for thought in sections with tantalisingly tasty titles including What Is A Recipe?, A Loving Defence of Brown Food, Much Depends on Dinner… and the divine section simply titled Pleasure.

On Thursday 25 November, the pleasure is all ours when we welcome Nigella to the Bath Pavilion as part of her Cook, Eat, Repeat live tour. But we were hungry to catch up with her ahead of the date…

Lockdown: how was it for Nigella?
I’m so aware that I’m incredibly fortunate; I had a roof over my head, a bit of outdoor space, food on my table, and work that I could do safely at home. I’m also very lucky that I enjoy solitude, so even though I spent several months alone, I didn’t ever feel lonely. Of course it was hard not to be able to hug my children, but so many people really suffered, either with their health, facing their own illness and death (or that of those they love) and struggling to make ends meet, or risking their wellbeing by having to go to work. So, overall, I’m just inordinately grateful.

Cook, Eat, Repeat: the process
An essential part of writing a book, for me, is spent not writing it! I don’t really know how many months I spent letting this one simmer gently on the back burner as it was a vague and unstructured process; by the beginning of 2020, most of the recipes were still just scribbles in my kitchen notebook. Even though days upon days with nothing in the diary is helpful if you’re trying to write a book, it took some time for me to find my way. Also, I need to pace about as I write, and lie on the sofa with a mug of tea at regular intervals from about 4.30am to 5.30pm every day with an hour off for exercise, celebrating the end of the writing day with a Campari Soda.

I rejigged the book quite a bit as I wrote too; I dumped a chapter on entertaining (which turned out to be dizzyingly inappropriate in the new world we found ourselves in) and replaced it with Much Depends on Dinner, about family suppers. I also added more recipes for one person, and adapted some of the serves-4 recipes to suit those cooking just for themselves. I chose recipes that, in one form or another, I return to often; I feel I just knew in my heart which ones clamoured the most to be included. Overall, I feel it’s important to trust the process more than the plan!

The close connection between recipe book and memoir
For me, I don’t feel that there’s a distinction to be made between memoir and recipe book; I feel that Cook, Eat, Repeat blends the two forms from the get-go. When I was young, I wanted to write novels, but I know now that I’m not a novelist, and I feel that writing about food does, in fact, take in so much of life. I feel I have found my métier and I have no ambition whatsoever to write a novel.

I don’t feel that there’s a distinction to be made between memoir and recipe book; I feel that Cook, Eat, Repeat blends the two forms from the get-go.

Finding that métier
I’d been working as a journalist since I was 23, and I was 38 when my first book came out. It’s not that I never wrote about food before How To Eat, but I was predominantly a non-food journalist; I was deputy literary editor of The Sunday Times when I was 26, then I went freelance, writing about the arts and doing book reviews. Then I became a columnist for the Evening Standard, then an Op Ed columnist for The Observer and then The Times, and I carried on being a freelance journalist for quite a few years after I began writing food books. I think I was probably on to my fourth book before I realised this was going to be my career! And it can still seem a bit odd to me – in a wonderful way – that this has turned out to be what I do. But I love it, and feel that most of the important things in life aren’t planned.

Food fads, foodie fashions: Nigella’s take
I think it’s probably impossible to be entirely innocent of fashion and fads, even if I’m not conscious of them as I write; so many of the recipes in Cook, Eat, Repeat are ones that, for me, have stood the test of time, or are actually at odds with current trends. But we are all children of our time, and so it’s inevitable that one will be influenced to some degree or other by the flavours, cuisines, and ingredients that are part of the culinary landscape.

So many of the recipes in Cook, Eat, Repeat are ones that, for me, have stood the test of time, or are actually at odds with current trends.

On being described as a role model…
I have to say the whole concept of a role model is alien to me; I feel that comparing oneself to others is not a healthy habit. As for seeing myself as any kind of role model – well, I feel that’s even more inexplicable!
I know it’s meant kindly, and as a compliment, so I don’t wish in any way to be ungrateful – kindness is something I always appreciate – but the idea slightly flusters me!

Nigella on Social Media
I always answered questions about my recipes on Twitter, but when we went into lockdown I really felt that more was needed, and began answering general questions about food and ingredients – what could be made with whatever the person had to hand, or how to substitute ingredients someone couldn’t get hold of for a particular recipe. In a way, you could say it’s time-consuming, but there’s nothing like writing a book for making one keen to do other things! I really value the connection; reading people’s posts, seeing the food they’ve cooked, brings me so much pleasure. A lot of social media is shouty and aggressive but my little patch of it is such a supportive and friendly community, and I couldn’t be more grateful. Anyway, I’m not interested in monologues: it’s conversation I relish!

Nigella on essential ingredients
The idea of any restriction on what I eat fills me with panicked horror! Having said that, I know I couldn’t be happy in a kitchen without anchovies, or in a world without rhubarb, lemons, Maldon salt, smoked paprika, thyme, olive oil, butter, bread, cheese… I could go on and on! Having said all that, I’m not mad on green bell peppers, but even so I wouldn’t like to rule them out forever. And who knows? I might suddenly fall madly in love with them!

Nigella on entertainting
The golden rules for hosting a successful dinner party at home are wear flat shoes (or none at all!). Don’t do starters. Make sure there’s enough on the menu that can be prepared in advance so that the evening isn’t made stressful by having to get everything ready as people arrive. And remember that not everything has to be piping hot and ready at the same time.

Cook, Eat, Repeat… in Bath
This tour is really all about the part food – and certain recipes – have played in my life, and that’s as much about the emotional resonance of food than flavour. I will also cover the very important theme of cooking for oneself, and I will certainly be talking about why I hate the term Guilty Pleasures!

I always love meeting and talking to readers, but now this has a particular significance since the pandemic made this impossible to do for too long. I think there’s a very intimate relationship between a book and its readers which I cherish, and I feel a book tour really celebrates that. Questions from readers and the chats and exchanges that flow from them during a live event give me a sense of connection which is a source or much joy and inspiration for me.

Spend an evening with Nigella as she shares the rhythms and rituals of her kitchen to celebrate her latest book Cook, Eat, Repeat. An Evening with Nigella Lawson, 25 November at Bath Pavilion, 7.30pm (plus live stream); fane.co.uk