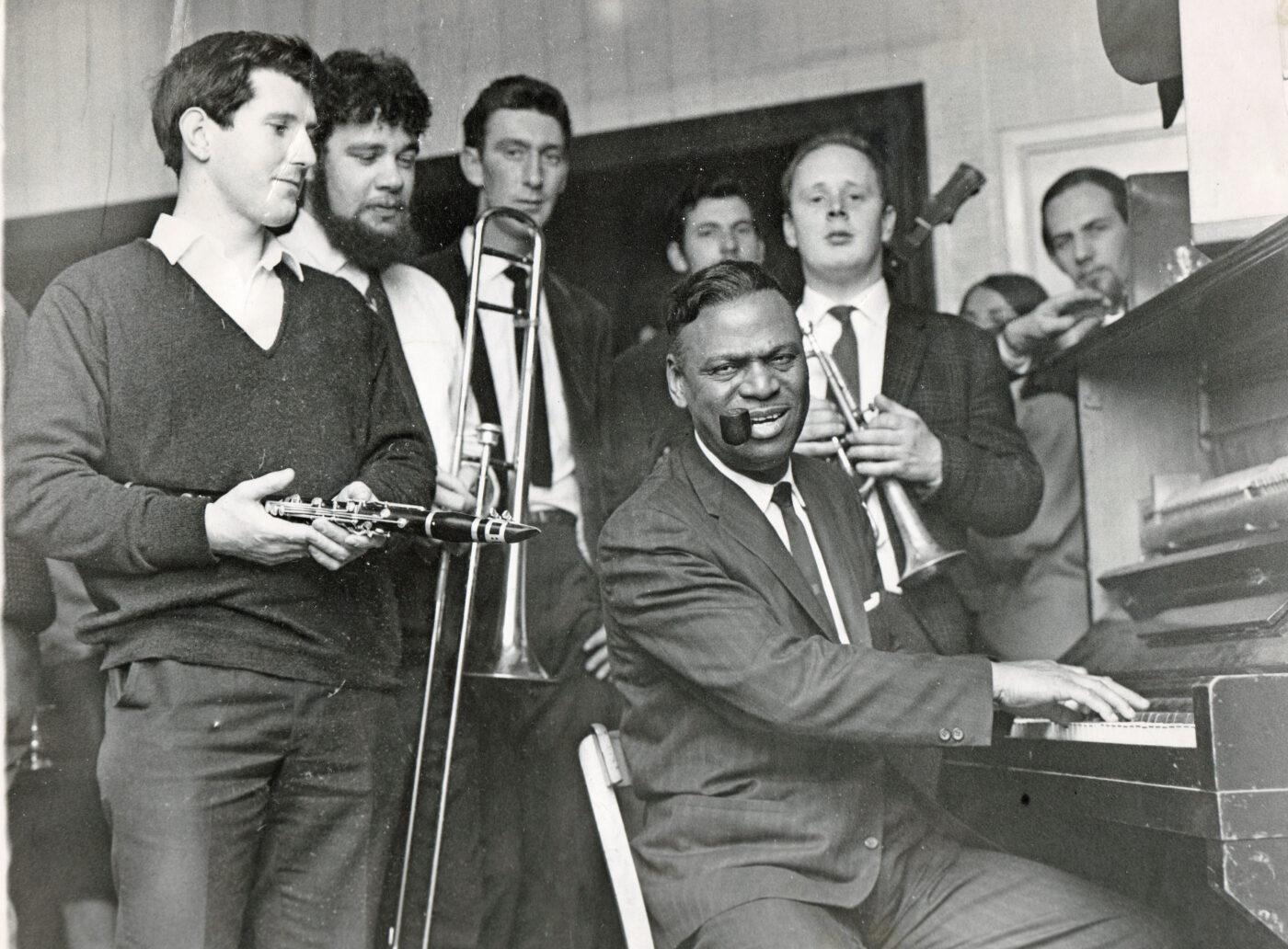 Photographer Geoff Ellis on getting the picture

Geoff Ellis thinks back to his time as a photographer at The Bath Evening Chronicle from 1957 to 1968 and treats us to a few of his memorable pictures, including ones of the floods of 1962 and meeting jazz pianist Earl Hines in 1965. The pictures are supported with excerpts from his book From Bath to Fleet Street.

I was three weeks away from my 17th birthday, and this was my first job after leaving school in Middlesex and moving west with my family. Things were quite different in those far off days of 1957. I had virtually no experience of using a telephone – the only one in our family was my grandmother’s but she guarded it as if the minutes were gold. Leisure wear did not exist. Men used to change out of their work clothes for sports jackets with open-neck shirts, although in a few racy places, gangs of marauding Teddy Boys were causing moral panics in the media – or newspapers, as we used to call them. The late 50s were a bit of an interlude between wartime restrictions and the liberated Sixties. Remember, food rationing had only ended three years earlier in 1954.

My dad had found the job advert for a junior photographer in The Bath Evening Chronicle and I applied. I got a quick response from the editor and an interview was fixed for the following week. Unbelievable today, but my Dad took me to the interview – he did not actually sit in, but he met Roy Helling, the editor. I was hired and started the following week on 1 July 1957 at a starting salary, as I recall, of £1-17-6d a week.

My First Assignment
It was when I got to around 150 feet off the ground, almost to the top of the beautiful Bath Abbey tower, that I realised my new job was not going to be mundane.
It was Monday 1 July 1957 and it was my first day as a junior photographer with the local daily newspaper. After a cursory conversation with the chief photographer, he thrust a small folding Zeiss Ikonta into my hands and sent me on my first assignment. Ron Pearce was not a man to mess with – he had been a young Marine in the first wave in the 1944 Normandy invasion and it was an order, rather than a request, that as the Abbey was under renovation and the scaffolding was in place, he had arranged for one of his team to use it and do some pictures.
It wasn’t scaffolding as we know it today, with Health and Safety rules dictating safety helmets, belts, clips and protection – in those days it was just endless ladders roped together. And as for safety clothing, it was my sports jacket and smart ‘new job’ shoes.
I managed to get to the top…enjoyed the view, did a selection of shots and cautiously retraced my steps down and along the road to the office. Ron, quite unperturbed by my safe return, gave me a quick briefing in one of the darkrooms and left me to process and print my results.

Geoff Ellis’ pictures form a unique record of the era, as the old picture library and negatives for The Bath Evening Chronicle were dumped during one of the changes in ownership. The few pictures that Geoff has, now shown in his book, were archived by him over more than 60 years.

Left: Tranquil scene in Southgate Street, a main shopping street during the Bath floods in 1962. I spent hours in a Fire Brigade rubber dingy during the floods, having unique views of the city underwater. The swans seemed quite unperturbed by our activities, continuing to enjoy their new surroundings.

Right: The Beau Nash cinema in Westgate Street with a queue for Doctor Zhivago, 1965. A few doors away from The Bath Evening Chronicle, in those days many of the businesses tried to help each other – Clive the cinema manager occasionally asked me to do a picture for publicity and in return, when I had a few hours off in the afternoon, he’d open the Upper Circle so I could watch films in splendid isolation.

Above left: Firemen fight the huge tyre fire in Melksham at Avon Tyres – the 1966 blaze was the biggest in Wiltshire’s history and cost in excess of £1 million. The fire destroyed almost the entire stock of tyres and caused road closures and an urgent need for rehousing. The Bath Evening Chronicle ran a double page spread of pictures and sold many photo reprints of the incident.

Above right: A smile from the Queen, accompanied by the Duke of Beaufort at Badminton Horse Trials, 1964. I covered the Badminton Horse trials a few times and my pictures included a shot of a young Anne on a horse with the Queen. I also got sworn at by Prince Phillip at Badminton, which I consider to be a Badge of Honour.

Above left: Bryan Forbes’ film The Wrong Box featured a host of stars including Michael Caine and Cicely Courtneidge and filming was in the Royal Crescent. Bryan was a popular director and I was amused at his efforts to get a little Instamatic camera to work – he was grateful when I showed him. Here is Bryan with Cicely Courtneidge relaxing on the Royal Crescent set of the film in 1965.

Above right: Rehearsals for the Roman Rendezvous in the Roman Baths, part of the Bath Festival celebrations in June 1962. It was only when I looked at the neg in the darkroom that I noticed a woman in normal coat and hat sitting on the side of the Baths… she should not have been there. A quick lick of white paint soon turned her outfit into a toga though!

Above: Cilla Black at the Pavilion with the Colin Anthony Group, c.1964. One of my regular assignments was photographing all the pop groups at the Pav each Monday night. I did loads, including Ike and Tina Turner, The Animals, Georgie Fame and Freddie and the Dreamers.

Right: Cleo Laine put her wonderful voice to use in a production of the vocal ballet Lysistrata in June 1964 at the Theatre Royal Bath. I met so many jazz legends, such as Henry Red Allen, Nat Gonella, Sister Rosetta Tharpe, Duke Ellington, George Melly, Acker Bilk, Brownie McGhee and Nina Simone.

Above: Young fans outside a Bath boutique opened by singer Cat Stevens in 1967. He was a nice young guy who seemed bemused at the effect he had on his fans. I came away with a signed copy of Matthew and Son, his 1967 debut single.

Above: Earl Hines with Bath jazzers at the Bell in Walcot Street. Hines, whose piano style influenced most later jazz pianists, was famous for his mould-breaking playing with Louis Armstrong on the 1928 recording of the duet Weather Bird.

In 1965 he appeared at the Regency, backed by the Alex Welsh band, providing a sparkling performance of his creative playing. At the end of the evening we were chatting to the band and Hines asked what sort of jazz scene there was in Bath. We offered to show him and he leapt at the chance, so the five of us bundled into the office Hillman Husky and drove to The Bell in Walcot Street, Bath’s leading jazz club. Later that evening we ended up eating omelette and chips at Biddy’s Café at Fountain Buildings and Hines regaled us with stories of his days with Louis.