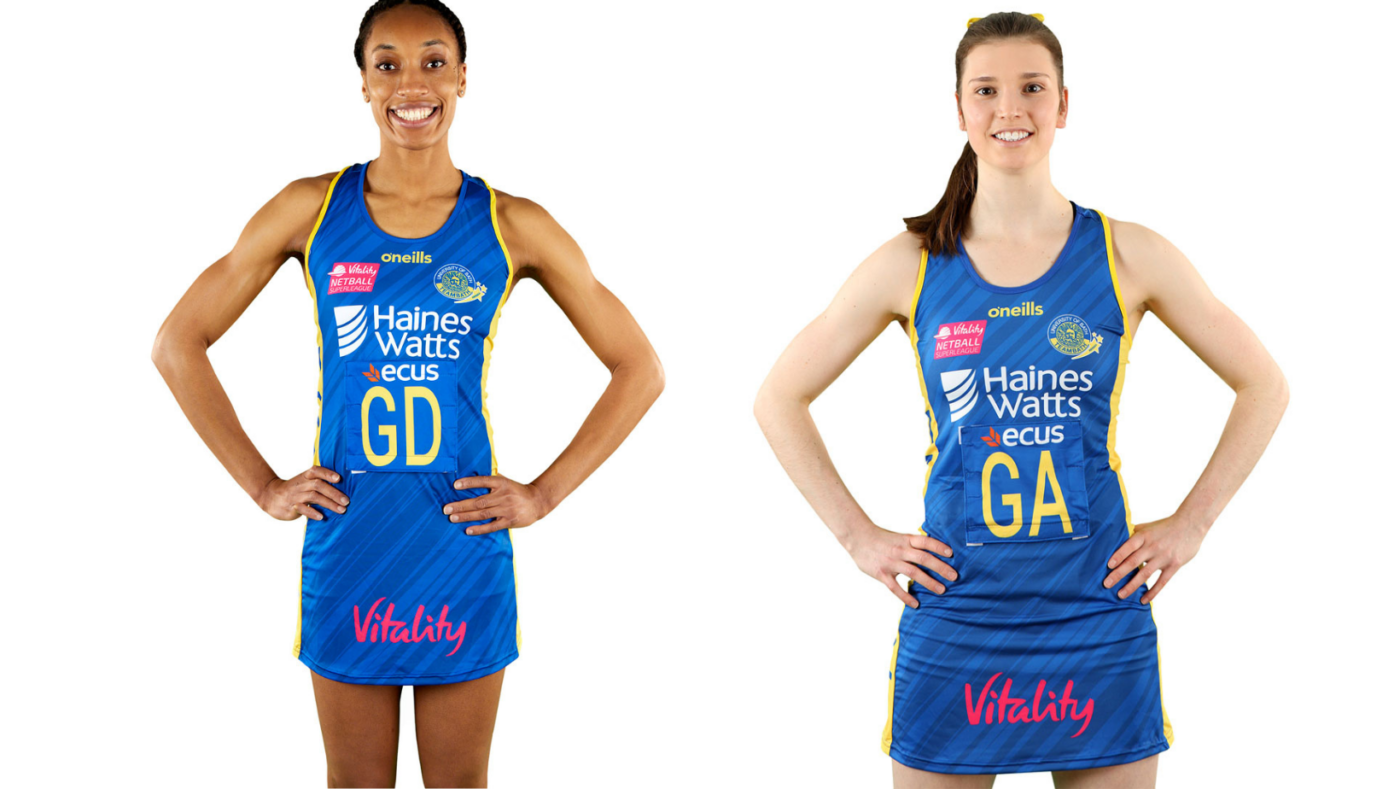 Fresh from their bronze-medal success in the 2022 Vitality Netball Superleague season, two Team Bath netballers have today been named in the Team England squad to play at the Commonwealth Games next month.

Layla Guscoth, a doctor at the RUH and originally from the host city of Birmingham, is joined by University of Bath graduate Sophie Drakeford-Lewis in the squad. Both were part of the Roses squad who completed a first away Series win against World Champions New Zealand last year and have come through intense competition to win their places.

Guscoth, with 36 England caps, is one of the top goal-defences in the world and her selection follows a stellar season with the Haines Watts-sponsored Team Bath squad in which she was named Superleague Player of the Year. She topped the league’s table for interceptions and was second for both the number of turn-overs and deflections this season.

Drakeford-Lewis, who has 11 England caps to date, has formed an eye-catching shooting partnership with Australian Kim Borger in the past three seasons in a mobile attacking unit which has delighted both Blue & Gold and neutral fans.

The 23-year-old has represented England through the age-groups, including taking bronze at the 2017 World Youth Cup. She is also a talented tennis player and could have chosen either sport when she started her engineering course at Bath but opted for netball where she has made a huge impact.

Alicia John, Team Bath Netball Manager, said: “It’s fantastic news for the players. We are very proud of them and wish them and England all the best for the home Commonwealth Games. These two selections are testament to the environment that we have worked hard to create and sustain for leading players here at the University of Bath and hope that these selections will inspire the next generation of players who are already in our pipeline.”

University of Bath alumna Imogen Allison, who captained the Rengen-backed Blue & Gold squad this season for the first time, is named as a reserve at wing-defence and centre.

Allison, a former World Youth bronze medallist and capped eight times for England at senior level, is equally at home playing in both positions and had to step up often at centre this season after the unexpected retirement from the game of Serena Guthrie – the iconic Bath and England centre.

Jess Thirlby, former Team Bath coach and now coach to the Roses, said: “No longer is it as easy to predict an England 12 such is the competition for places and depth in quality within our programme. We have worked hard over the last few years to ensure that the internal competition is high in order to drive the intensity needed in our environment to best prepare the team for big stages such as Birmingham 2022.

“The player group have been outstanding in embracing this challenge and the final 12 represents that hard work. I want to both congratulate and thank all the athletes that have been a part of this journey so far.

“The squad allows us the positional coverage and diversity to be able to counteract any of our toughest opposition and as important a consideration is ensuring we have the robustness both physically and mentally to sustain and elevate our performance levels over a 10-day tournament and the unique conditions that presents.

“We look forward to playing in another big tournament and representing our fans on home soil so soon after Liverpool in 2019, something unlikely to happen again in our lifetimes and one which we are not taking for granted.”

Phumza Maweni, who excelled at goal-keeper for Team Bath during the 2022 season, has been selected for the South Africa squad for the Commonwealth Games and further announcements are expected soon, with Betsy Creak hoping to be named in the Welsh squad.