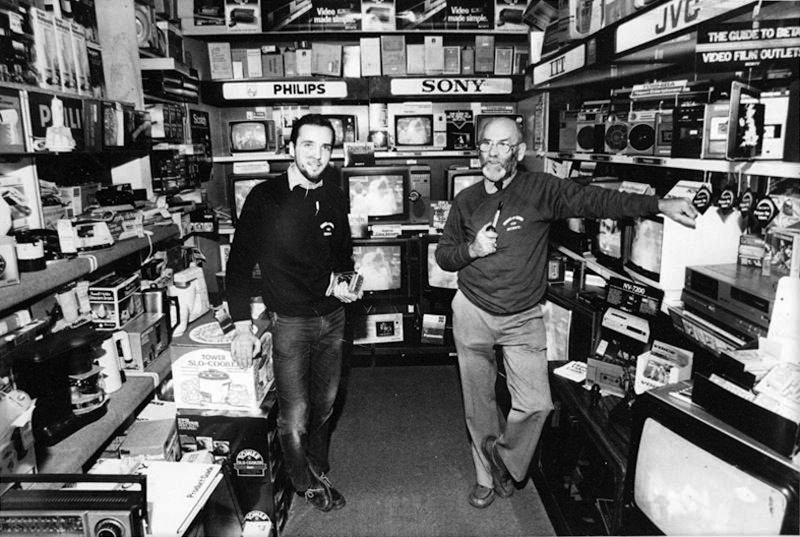 It was the year that Marilyn Monroe serenaded President Kennedy on his birthday, when Marvel’s Spider-Man superhero made his first appearance and when the oral polio vaccine was first rolled out. It was 1962 – also the year when Moss of Bath first opened its doors. We ask Tim Moss about those 60 years…

What is the background to Moss of Bath?
My father Frank Moss was a pharmaceutical rep, selling into GP practices and chemists. Fed up with being away from his young family at home and with an interest in amateur radio and early technology, in 1962 he started his own business. Now run by its three directors, Moss of Bath is still a ‘family’ business with its roots firmly tied to Bath.

What are your memories of the first shop?
The first shop was in The Avenue, Combe Down. This is where I was based with my father prior to opening our city centre store in 1984. It was a thriving business and an important education for me in the art of retail. We had a small workshop where he undertook repairs to faulty products. I have fond memories of my father sitting outside the shop in quieter moments listening to the cricket on an old Roberts Radio.

What were popular products across the decades?
My father originally concentrated on small domestic appliances – kettles, toasters, irons, as well as vacuum cleaners, food mixers and blenders. Electrical hardware items were also stocked: batteries, lamps, vacuum cleaner bags, cables and accessories. As cashflow permitted, my father would stock one or two black and white televisions, and with enviable foresight he registered the business as F. H. Moss (Colourvision) Limited. People were hungry to embrace new technology. Innovations such as colour TV, video recorders and compact discs signalled the start of the home entertainment boom.

The 1970s saw dramatic changes in the CE (consumer electronics) industry. New products were launched, such as colour televisions, music centres, cassette players, pocket calculators and clock radios, and it was the start of foreign manufacturers such as Sony, Japanese Victor Corporation (JVC) and National Panasonic entering the UK market. Prior to this the majority of products were manufactured in the UK. The 1980s saw the affordable launch of the video cassette recorder and compact disc player, both significant milestones.

When did you open the city centre store?
We opened the new store in 1984, in the location previously occupied by Eric Snook, where we were able to expand the television and video displays and set up two dedicated hi-fi listening rooms. We expanded into the adjacent store in 1989, providing additional display space for televisions. As CRT televisions became bigger and heavier, by the mid-90s we moved storage and servicing off-site to Brassmill Lane.

Have you always offered installations and servicing?
Yes, and this in-house facility differentiates us from most other electrical retailers. In the early 80s, I sent out a mail-shot to pubs, restaurants, hotels and clubs within a 25-mile radius, promoting the installation of quality foreground and background music systems. We immediately picked up many large contracts resulting in the purchase of the business’s­­­ very first Moss of Bath van, a Bedford Rascal! Prior to this deliveries had been undertaken in my father’s Volvo estate.

How has the consumer electronics business changed?
Trading within a constantly changing industry can present challenges and we constantly review the goods and services. Our staff regularly attend manufacturer training sessions to keep abreast of the latest technologies. We do not fear change; we embrace it. We are convinced that there is always a better way and we are constantly looking for it.

One of the most significant changes was the move from bulky CRT televisions to the flat-screen ones we mostly display today. We redesigned our television showroom to reflect this and are now presented with another challenge, how to display the increasingly larger screens of 75 and 85 inches and more. We now operate a single brown goods store with all stock, administration and a service centre housed in one site over five floors of a Georgian building. There are two television showrooms, a dedicated hi-fi demo lounge and a Smart Home lounge on the first floor with a wi-fi network throughout the building; essential for music and video streaming demonstrations. My role within the business has changed dramatically too, spending a considerable part of my working week visiting architects, developers, interior designers, builders and private clients for site visits.

What are some of your fondest memories?
My fondest memories will always be about the people I have met in my 43 years. From the genuine relationships with so many clients to the extraordinary way our teams have been prepared to go the extra mile. In 2017 I was thrilled to be presented with the ERT ‘Special Achievement’ award for services to the Consumer Electronics industry, particularly special because it was an endorsement from fellow peers in the industry.

How do you see the industry developing?
I think the future for the independent electrical retailer is bright, as long as we continue to offer the goods and services demanded by the consumer. Manufacturers are addressing the price differential between online and in-store, meaning that the price of products are now more-or-less the same wherever purchased. Retail is worth £321 billion to the UK economy and the existence of a strong and diverse independent sector on our high streets is essential to ensuring its continuing success. As for the future, the CE (Consumer Electronics) industry has a history of innovation, producing products that will entice, excite and deliver experiences.

What is the secret of Moss’s success?
We recognise that the demands of customers are changing faster than ever before and embrace the opportunity to change and adapt to those evolving needs. Selling great product, focusing on great brands and providing a clear customer journey from ‘quotation to completion’ is key to our continued success and longevity. We won’t ever try to be a small version of a big multiple – we aim to be the ‘go-to local experts’ in sound and vision for the 21st century (and beyond!).