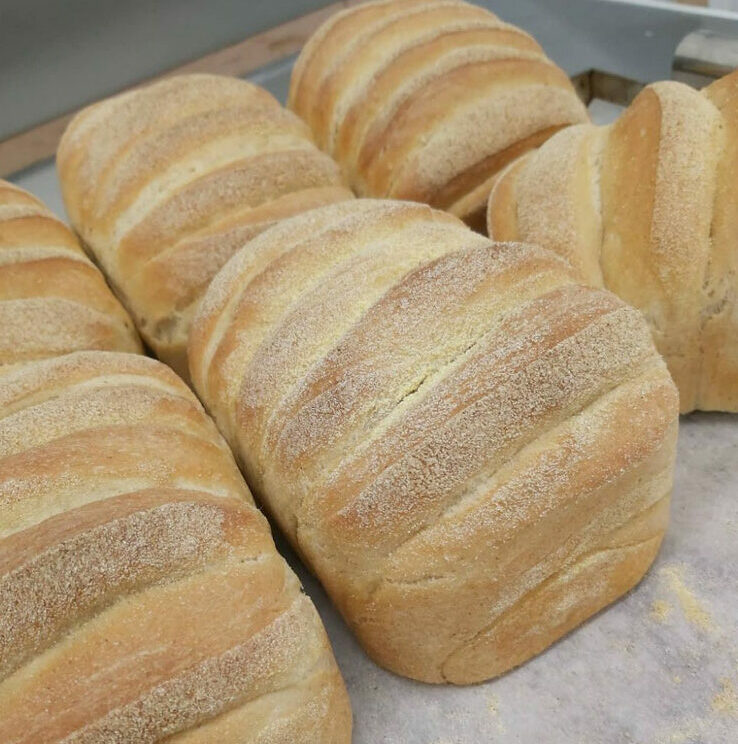 There’s a new bakery in town and it has a Grecian flavour. Melissa Blease meets Basil Athanasiou and
his wife Nuola and discovers baked temptations from soughdough rye bread and cinnamon rolls to Koulouri (sesame bread rings) and Spanakopita (savoury spinach pie).

If you haven’t explored the characterful neighbourhood that follows the river as it flows west towards Bristol lately, there has, since last May, been yet another very good reason why you should set the SatNav for Locksbrook Road.

The shutters raised on Basil’s Bakery only eight months ago. But already this enticing little family-run baked-goods hotspot, offering views beyond the fully laden shop counter all the way through to the oven-lined open kitchen where Basil works all manner of bakery magic, has garnered legendary status and a big, big reputation for impeccably crafted crusted creations.

“We’re a Greek family, from Salonika,” says Nuola Athanasiou, Vasileios’ (aka Basil’s) wife. “We had two bakeries there, starting with a smaller shop and then opening a bigger one, supplying wholesale orders. We were busy, but the Greek crisis changed everything. In 2016, we made the big decision to sell the shops and start looking for work outside of Greece. I’d visited the UK when I was a student and I’d always loved it here. Basil came over first; he’d arranged to work for Richard Bertinet for a week, on a trial basis; the trial went really well, and he was offered a permanent job. Three months later, I joined him – and here we are!”

Here they are indeed. But the little bakery that looks and feels like a firmly established landmark on Bath’s foodie scene was, five years ago, still very much only a pipeline plan. Basil continued to work for Richard Bertinet for four years before he moved on to add stints at other legendary west country baking institutions including Parsons Bakery and Hobbs House to his UK CV.

“My husband was very happy in his work, because he loves bread!”, says Nuola. “But we’d been looking for our own shop for a couple of years. We wanted to cater to an out-of-town, local market rather than basing ourselves in the city centre, but most of the shops we viewed were in residential neighbourhoods with accommodation upstairs. Because Basil bakes so late into the night and into the early hours of the morning, it wouldn’t have been nice for our neighbours to have somebody working in such a close location, so late. So, the Locksbrook Road unit was perfect for us. And we live just up the road from the shop, which is ideal.”

All the breads are completely additive-free, and they’re all made in the traditional way – you can tell when you taste it!

It’s ideal for the people of Bath too – and not just those in the nearby vicinity. Planning a drive-by bakery grab? Pootle up, park at the front of the shop and dash in (or take a more peaceful pootle along the Bath-Bristol cycle path).

“The shop is going really, really well,” says Nuola. “We were very well supported from the start by a lot of people who already knew us as the Greek family in their neighbourhood – our children go to a local school, so we were already friendly with families in the area, and they all came to the bakery from the moment we opened our doors. But the important thing is, they kept coming back – and they wouldn’t have done that if they didn’t like our bread!”

Ah, yes – that bread. Walk in to Basil’s on any given day (apart from Sunday!) and you’ll be greeted with an array of super-fresh, hot-from-the-oven dough-based delights in multiple formats, from standard sandwich loaves to distinctly upper-crust incarnations of sourdough (including a cranberry and walnut sourdough for the festive season), rye bread, ciabatta, olive bread, croissants, brioche, malted loaves and more, with savoury classics such as sausage rolls and Basil’s delectable Spanakopita nestling up alongside the sumptuous sandwiches-to-go, and sweet treats such as flapjacks, millionaire shortbread and – yes! – mince pies smoothly ushering you off the path of righteousness.

“Everything you see is freshly made, right here, on site,” says Nuola. “Basil works really hard, and he bakes alone because there isn’t enough room for two people to bake in our workshop – but still, he manages to make everything himself. But our strong point is our bread: of the whole range, our sourdough is definitely the most popular, followed by the Harvester loaf. All the breads are completely additive-free, and they’re all made in the traditional way – you can tell when you taste it! Our Spanakopita (spinach and feta parcels) are very popular too – Basil hand makes his own filo. Oh, and you have to try our Koulouri: sesame rings from Thessaloniki, crunchy on the outside with a soft, chewy centre – everybody loves them.”

But another Greek delicacy we have to try this season is Basil’s Melomakarona, described by Nuola as a soft cookie with honey, walnuts and spices. “At Christmas, Melomakarona are very popular in Greece,” she says. “We’ve made them every Christmas for a very long time for family, friends and neighbours, and they all love them. We believe they’re going to be a very big seller here, and you have to try them at home!” And Nuola means that literally: she’s gifted the recipe to us.

Nuola, I have to ask: do you and Basil watch the Great British Bake Off? “We used to, but we don’t have time anymore!” she laughs. And indeed: who needs a Hollywood handshake when Basil’s on hand?