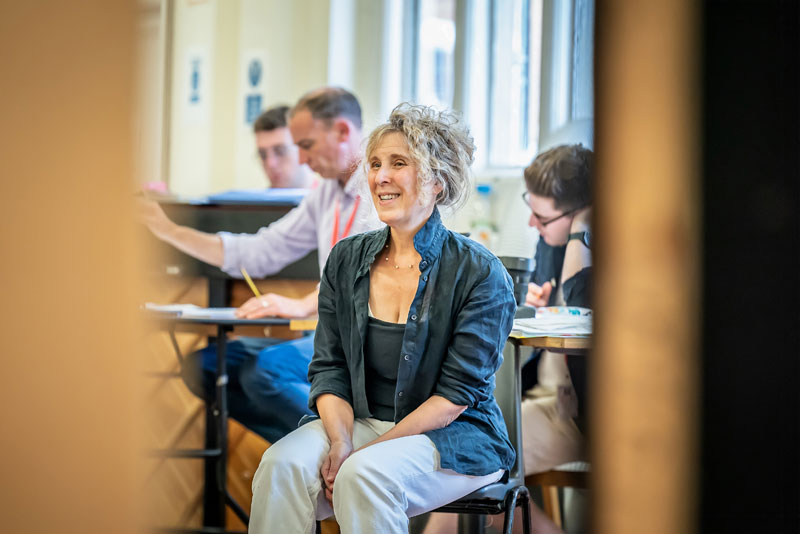 There’s a new revival of James Lapine’s Into the Woods coming to Theatre Royal Bath. Melissa Blease chats to co-director Leah Hausman and finds out what it’s like to work with Terry Gilliam in musical extravaganza land | Photos by Marc Brenner

Welcome to the complex world that is Stephen Sondheim’s 1987 musical extravaganza Into The Woods, the latest revival of which is coming to the Theatre Royal Bath in August, co-directed this time around by iconic stage and film director Terry Gilliam in partnership with globally acclaimed choreographer/movement director Leah Hausman.

“For sure, there are lots of strange things happening when you join us on our journey Into The Woods!” Leah laughs. “But if we, as directors, even begin to try to explain why they happen, we’d ruin it – you just have to let those things happen, and that’s what I hope we’ve done.”

As to how, exactly, Leah and Terry got to do what they’ve done, let’s start at their very beginning (which is, after all, where all the very best fairy tales start).

On the one hand, it’s a morality tale… But equally, there’s a message around the beautiful sense of a coming together

Leah originally trained in dance and drama in New York City and at the École Jacques Lecoq in Paris before relocating to the UK some 36 years ago. She went on to work for theatre and opera companies including English National Opera, the Royal Shakespeare Company, Complicité, the National Theatre and The Old Vic, and directed major opera revivals for international opera houses around the world. Her recent productions as Associate Director and Movement Director include collaborations with the Dutch National Opera, Opera Nationale De Paris, The Metropolitan Opera, Chicago Lyric Opera, San Francisco Opera and Scottish Opera – and today, here she is, doing her magic to a Stephen Sondheim beat. So when and where did her collaboration with Terry Gilliam begin?

“Basically, the English National Opera team thought Terry and I might make a good connection,” says Leah. “Like me, Terry loves the orchestra and adores imaginative music against which you have to find theatrical solutions. We both know the stage, and understand staging, and all the ‘understanding staging’ shenanigans that you have to know about in order to do the job. From our very first meeting, all I can say is that it was just incredibly easy! It was never a job interview, it was just the two of us talking, and laughing a lot. We immediately shared many similar references; Terry’s older than me, but not that much older. He was born in Minnesota and I lived in Minneapolis for, like, a gazillion years. I have to confess, though, that when I first met him, I didn’t know a lot of his work! I knew some of the famous films that he had made, but I wasn’t 100% familiar. But I felt like I had certain skills that he didn’t have, and he was so quick to pick up what was needed. I hesitate to call myself a director, because I come from that collective, theatrical tradition where making theatre is a hugely collaborative event based on the people that you work with, who are all thinking and doing really interesting things – and Terry was definitely one of those people”.

Oh Leah, whether you give yourself a job title or not, you must bring something intrinsically unique to the Terry Gilliam party? “Well, he’s an exquisite director, but I guess I bring that sense of how to really move the masses, move the groups, use the actors, to his work,” she concurs, under pressure. “I’m one of the many branches of the nice little team that he’s built around him. Anyway! The opera house put us together and it was immediately clear, right from those very first moments, that he and I were going to have a ball.”

Since the pair established their connection, Gilliam and Hausman have worked extensively on multiple productions starting with The Damnation of Faust and Benvenuto Cellini for English National Opera (2010/2014 respectively). So how come Sondheim, and fairy tales, and their voyage Into The Woods?

“I grew up with Sondheim,” says Leah. “I lived in New York at a time when his musicals were really, really big news, and Sondheim was part of the New York theatre world fabric. And the funny thing is, Terry and I both saw an early production of Into The Woods in London, before we knew each other, and we both loved it – and I mean, loved it! In fact, that was the show that really turned me on to Sondheim, and the memory of it was looming over us when we were thinking about doing this production; we thought, nobody could do it better than that one, so what are we going to do?”

So… what did they do?

“I think, above all, this production of Into The Woods is very Terry! There’s something about the visual world that he conjures up that only he can do,” she says, again stepping out of the spotlight that I’m so keen to shine on her. “But we both love humour, and I suppose that sense of – well, I hesitate to use the words ‘vaudeville’ and ‘slapstick’ because they can have some strange connotations. But when vaudeville and slapstick are done in the spirit of what Sondheim has written, there’s nothing better – it’s just pure delight. At the same time, though, Into The Woods definitely has a very dark message, a very dark element. The genius of it is that James Lapine’s text leaves a space for you to interpret it in your own way.”

For those of us who aren’t familiar with the show, how would Leah ‘sell it’ to us?

“Oh, it’s an easy sell” she says. “Above all, it’s a great night out, with great songs! And it’s charming, and funny, and heart-rending – it offers up so much. On the one hand, it’s a morality tale in as much as your actions have an effect on other people. But equally, there’s a message around the beautiful sense of a coming together of humanity, in that we’re all better off as a community that works together than when we are disparate, working as individuals. But we can’t actually play theatrically to either or both of those themes directly because everyone who sees the show will hear and see something different. Our job is to get the storytelling done as clearly as we believe we possibly can, and then the message is just – well, whatever the message is, to you. But I think that one of the great things about what Terry and I have done is that there’s nothing revolutionary going on in this production; we’ve made a piece of theatre that takes some very odd, unexpected turns for the audience, and that’s all that makes it ours. We’re not trying to reinvent the wheel with anything about the production, but it definitely has its own flavour, with a touch of the surreal and a touch of the absurd in the mix too. Oh, and I hope it’s a little bit scary as well!”

Talking to Leah, it quickly becomes clear that theatre-making is genuinely, honestly the force that drives, steers and directs her whole life. Am I right?

“Oh totally, yes!” she readily responds. “I’m a person who doesn’t have a huge number of hobbies – like, for me, the pandemic was all about oh, okay, what do I do now if I don’t do what I do? Because I really do love what I do, which means that my hobby is my work, which is beautiful in the sense that I am so very, very lucky to be able to be in a profession and work as much as I do doing something that I love. I love music first and foremost, and movement to music is – well, my world. And they both come together in perfect harmony with Into The Woods.”