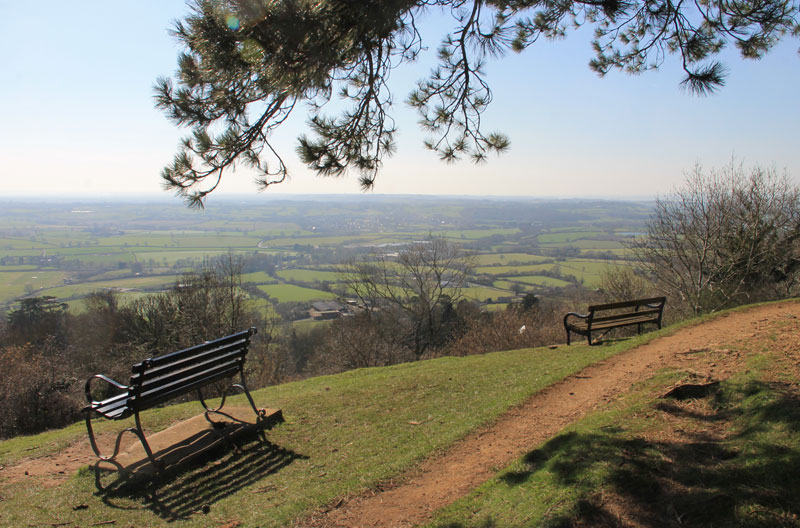 Andrew Swift: a walk from Wotton-under-Edge

Wotton-under-Edge is an old weaving town where timber-framed shops rub shoulders with Georgian townhouses. Andrew Swift takes one of the steep and narrow pathways on The Cotswold Edge, which hangs over the little town.

Wotton-under-Edge is a little-known Cotswold gem, an old weaving town whose grid of narrow streets is still largely intact. Here, timber-framed shops rub shoulders with Georgian townhouses, commodious inns stand alongside weavers’ cottages, and a surprise lies around every corner. It seems astonishing that this place can be found so close to Bath and Bristol.

Few towns have a name so descriptive. The Cotswold Edge hangs over the town and the ways leading up to it are steep and narrow. One of them forms part of the Cotswold Way, from which we set off.

Arriving in Wotton-under-Edge, head for the free long-stay Chipping car park. (ST756931; GL12 7AD). On the north side, you will see the museum and heritage centre. Walk up Market Street, to the left of it, and turn left at the end along High Street. When you come to the main road, cross to carry on along Bradley Street. After 300m, follow the Cotswold Way (CW) sign as the road curves right uphill. At the main road, turn left for 100m, and, just past the junction with the Old London Road, turn right up a steep footpath (ST751935).

As you go up the path, views open up over the town and beyond. After crossing a lane, you will see a clump of pines on Wotton Hill above you on the left. Although this lies off the CW, it is worth a detour for some magnificent views. Trees were planted here to commemorate the Battle of Waterloo in 1815, and replaced in 1887 to celebrate Victoria’s Golden Jubilee, when a wall was built around them. The Scots and Corsican pines which now grace the hill are of more recent vintage, however.

Rejoining the CW, go through a kissing gate and turn left along the edge of a field. (ST752938). Carry on, following CW signs, and after 1400m you will come to Brackenbury Camp, an Iron Age hillfort with some impressive ramparts, but so overgrown that further exploration is difficult.

After passing the camp, the CW swings right before bearing left 300m further on, where six paths meet (ST747952). Ahead you will see open grassland, which leads up to the Tyndale Monument. This 34m tower was erected in 1866 in memory of William Tyndale, a local man who suffered martyrdom 330 years earlier after translating the Bible into English. Look out for a toposcope identifying various landmarks, before climbing the monument’s 121 steps to take in one of the finest views in Gloucestershire.

Retrace your steps into the woods, but, when you come to the place where six paths meet, leave the CW to head straight on, following a sign for Gateway Route 2.

After 30m, when you are confronted by a choice of two bridleways ahead, take the one on the left. Immediately after this, when the path forks again, bear left. At the next fork – 75m further on – bear right, following a bridleway sign to continue heading south-east (ST748952).

Carry on in the same direction along a green lane, ignoring paths branching left and right, for 750m. After crossing a broad track, carry straight on along a narrow path, with a field on your right (ST753947). After another 600m, when you come to a road, turn left for 30m, and, just past a junction, cross a stile in the hedgerow on the right to follow a path signposted to Coombe Hill (ST757943).

After 75m, when you meet a wider path, turn right along it. Carry on for 300m and, as you emerge into open country, cross a stile by a metal gate (ST760940). A few metres further on, instead of bearing left on a well-worn track along the contours of Coombe Hill, follow the footpath sign on a telegraph pole straight ahead to head down a rough, steep track which joins a path bearing left near the bottom of the field.

The vertiginous topography of this hidden corner of the Cotswolds is spectacular, with rare species growing in abundance on the grassy slopes. Carry on as the path leads down through the trees to follow a barbed-wire fence into the next meadow. Don’t follow the path down to a stile with a footpath sign, but carry straight on along a grassy track (not marked on the OS map). After 250m, head down to another stile leading to a busy road (ST765940).

Cross over and turn left for a few metres before turning down a lane. After 175m, when the lane swings right downhill, carry on up the high-banked lane ahead, and at the top turn right down a hollow way (ST767942).

Carry on past ruinous Coombe Hall Farm, and, when the tarmac ends, continue down a stony bridleway (ST768940). After 150m, go through a kissing gate on the right and carry on along a muddy footpath. The ponds to your left fed the grist mill beyond, which in the 19th century became a dye mill before being converted to the Coombe Valley Brewery, run by Arthur Guinness of the Dublin brewing dynasty.

Turn right when you come to a lane. At the pumping station, turn left for 25m before turning right to follow a CW signpost along a path beside Dyers Brook. After 300m, cross a stile on the right into Holywell Leaze, where an information board gives details of the mill that once occupied the site.

Go through a kissing gate at the end of the field, cross a lane and carry on along the footpath opposite. Just after the path broadens into a lane, turn left along Marchesi Walk to continue alongside the brook (ST762936). After 300m, just after the brook disappears behind a fence, bear right when the path forks, to discover a fascinating corner of Wotton called Potters Pond.

Turn right at the end to walk past the town’s most famous building, the old Ram Inn. Built in the middle ages as a church house, it was later converted to an inn which closed in the 1950s. Today, it is reputedly one of the most haunted buildings in England and the venue for regular ghost hunts.

Carry on uphill, cross the road at the top and take the next turning left along Church Street, where the 17th-century courtyard and chapel of Perry and Dawes Almshouses are open to visitors.

Turn right along Long Street at the end and take the second left into Orchard Street, where a plaque indicates the house in which Sir Isaac Pitman invented his method of phonography. At the end, turn right and after 100m turn right at the end of Beaumont Row into the Chipping car park.

Many more walks can be found in Andrew Swift’s Country Walks from Bath, published by Akeman Press; akemanpress.com.