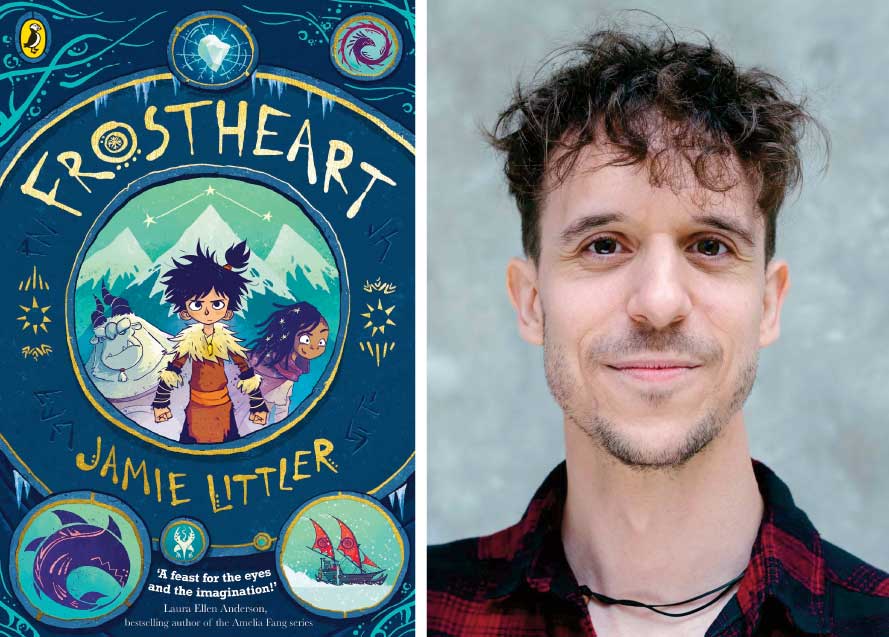 Wonder is a new book venture with the aim of entertaining and inspiring young minds with the big-name children’s authors and illustrators. Gill and John McLay are the brains behind the brand, and here Gill gives an outline of one of their books of wonder, Frostheart by Jamie Littler

Calling all fans of epic quests, life changing adventures and fantastical stories! Jamie Littler’s new book, Frostheart, is an absolute treat, an epic tale of adventure that takes its reader to new arctic worlds aboard the Frostheart.

The hero, Ash, is a young boy with the ability to ‘song weave’. He can communicate with the dangerous Leviathan monsters who hunt and destroy the people of his world. Song weaving, however, is forbidden and when he discovers his secret ability he is forced into exile aboard the Frostheart, a Pathfinder sledge manned by a crew of misfits. On his quest across Snow Sea, Ash seeks to find to find his missing Pathfinder parents and follow the lullaby that is the only reminder of his family.

Set against a magical backdrop of snowy, mountainous landscapes and frozen seas, this is a story full of wintery worlds, which are brought to life by Littler’s brilliant illustrations, making the book a huge treat for the eyes and the imagination.

On his quest across Snow Sea, Ash seeks to find to find his missing Pathfinder parents and follow the lullaby that is the only reminder of his family.

As Ash travels we meet the crew of the Frostheart, members of other strongholds and a fabulous array of creatures and monsters, each one brilliantly imagined with loads of heart and personality. The many characters include Lunah, Ash’s friend from the Frostheart crew and the Captain herself, Captain Nuk, a giant female walrus. It is really hard to choose a favourite, but mine is Tobu, a soft-hearted yet strong yeti. The one person that truly cares and understands Ash, he becomes his guardian and protector. I also love the Vulpis, a small fox-like creature who is easily distracted by anything shiny!

My favourite thing about Frostheart is its ability to transport into Ash’s world and make you champion his cause. As we read the book at bedtime each night we were transported straight back and just kept reading. The only disappointment was when the story came to an end. That said, I’m really excited that a Frostheart 2 is coming this autumn, so maybe now is the perfect time to meet Ash and his friends so you are ready to follow his quest in the next book.