WHAT KIND OF TIPPER ARE YOU – SANTA or SCROOGE?

With festive feasting coming up Melissa Blease examines the practice of tipping serving staff and talks to some of the people at the sharp end of our gratuitous gestures.

Many folk do it without giving the issue a second thought, rounding the bill up to a few quid above the bottom line. Some people apply a more studious method, “rewarding” staff for “good behaviour” and applying penalties when service hasn’t been as efficient as they’d like it to be. Others take a clinical approach, whipping out calculators in order to strictly adhere to adding 10 – 15% to the total sum (the required amount, according to Debrett’s, the UK’s number one authority on social etiquette.)

So, what kind of tipper are you: Santa or Scrooge? But be careful how you respond to that question because as many psychologists, from armchair to professional, will tell you, apparently your attitude to tipping restaurant staff says more about your personality than your job, your handwriting or your body language.

“I can always tell when I’m serving a newly-dating couple because the man – and it is still usually the man – is always particularly generous when it comes to leaving a tip . . . as long as his date can see how much he leaves!” says Erica, who works at a popular city centre gastropub in Bath. “He’s letting his date know that firstly, he’s not short of cash, and secondly, he’s not mean – nobody wants to date a meanie, do they?” Very true. But there are indeed plenty of meanies around, as Stan who works in a diner in Southgate reports.

“It’s not unusual for a table of diners to rifle around for a few coins of spare change to leave on the table after they’ve all paid their sections of the bill. This is more likely to happen if it’s a table of tourists; I think they’re thinking, ‘we’ll probably never come here again, so we don’t care what the staff think of us.’ But I’d rather have a table leave nothing at all than 84p between four of them – it’s just condescending.”

Whether we agree with the practice or not, tipping is a time-honoured way of recognising good service while offering a quantifiable thank you to a person who works in an industry that’s hardly renowned for paying generous wages. While restaurant staff wages shouldn’t be our responsibility, some restaurant owners believe it’s OK to take extra cash from their customers to contribute towards staff’s take-home pay.

A recent survey conducted by the Institute for Public Service discovered that fewer than half of all restaurant workers get to keep tips given by customers, as their bosses put gratuities towards staff wages: a practice that was officially outlawed by the Government back in 2009 but apparently still goes on today, albeit in many clever disguises.

“I worked for a restaurant which only let floor staff take home tips to a maximum of £10 a week as the rest had to go towards kitchen staff wages,” says one Bath waiter. “I’ve been told that the cost of processing a tip left on a credit or debit card comes to more than the tip itself, so the restaurant I work for can’t afford to do it,” says another. But there’s no law that requires that tips left by customers go to the restaurant staff anyway.

Little wonder, then, that 83% of the people polled for the IPC survey – many of them former or current waiting staff themselves – believe that the Government should amend consumer protection laws so that both employees and customers are clear about tipping policies and cover charges. Ah, cover charges: is this a tip – or a tax? Cover and so-called discretionary service charges are increasingly appearing as an extra cost added at the end of our total restaurant bill.

“The restaurant I work in adds a 15% service charge to all bills during evening service,” says a waiter at a recently-opened, big name chain in Bath. “I can tally up what tips the team should be sharing at the end of any given shift just from the number of tables we’ve served, but we never get anything close to that amount at the end of the evening. The bosses say that the cover charge goes towards the general cost of servicing the whole restaurant, from cleaning the loos to changing the lightbulbs. But when people see a service charge, they think it’s going directly to the people who served them their meal.” 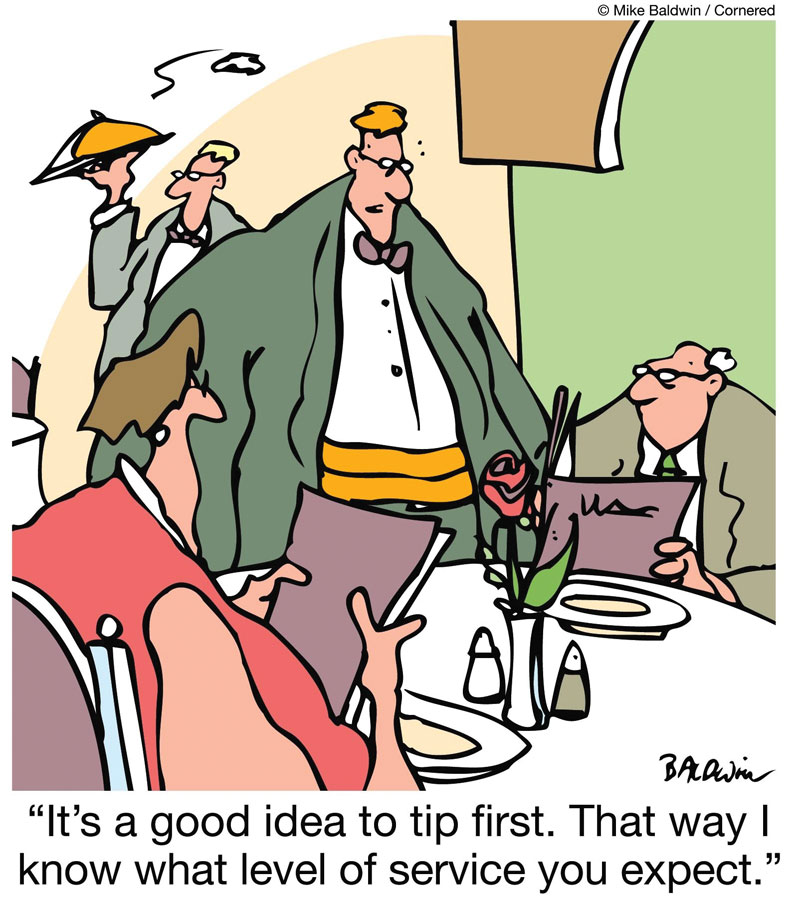 There are customers, however, who may not even notice the additional charge; at the end of a convivial evening out, it’s easy to ignore the small print (and it tends to be very small indeed) which is flagging up an additional cost, generally fluctuating between 12.5 – 15%. And what if the service has been less than efficient anyway? Asking for the charge to be removed – which you’re totally at liberty to do – isn’t an easy task, especially if there’s been more than one server involved.

Bear in mind too that many restaurants genuinely do share service charges between all the staff involved in making your evening go with a swing, from the meet’n’greet team to the kitchen porters who do the dishes and take out the bins – surely those hard-working people shouldn’t be penalised if your main server has been sulky, or inept, or just plain lazy?

But we’re getting perilously close to some kind of ancient master-servant power trip relationship here, far removed from a friendly “thank you” custom between equals.

Has the very concept of leaving a gratuity become outmoded altogether? “To be honest, I’d prefer to be paid a decent wage for the work I do, and not have to constantly hope that customers leave me a decent tip in order to help me make ends meet,” said one waiter – and he wasn’t alone in his opinion.

But as the convention of tipping is unlikely to be phased out anytime soon, restaurant customers can play a big part in putting a stop to bad practice. Top tips for ensuring your server actually gains from your gesture include paying all gratuities in cash so there aren’t any transaction costs to be claimed back at the processing point, and asking your server (or even the restaurant manager, or owner) if staff do indeed get their fair share of tips, especially service and cover charge supplements.

As many of us will be eating out over the Christmas holiday, perhaps it’s time we asked the right questions about exactly what happens to the gratuities. It’s time to stop tiptoeing around the subject of what happens to tips, and demand change.