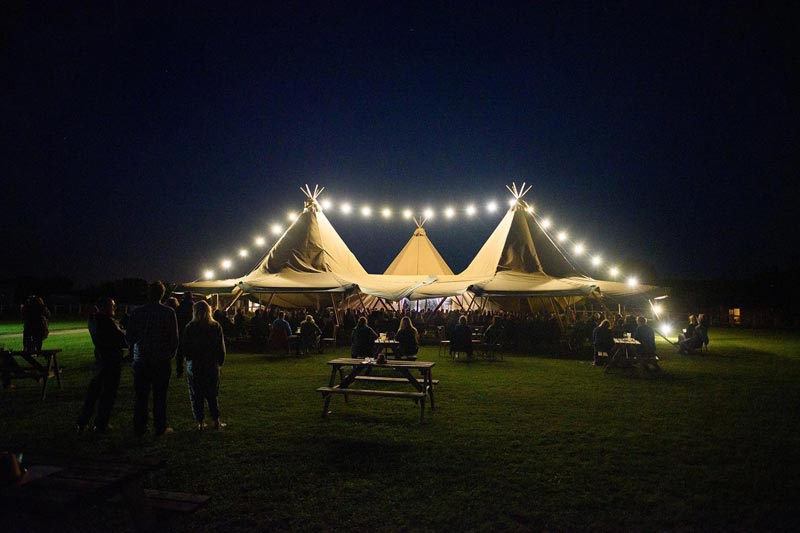 From 9–12 September Rode Comedy Festival is returning, after its launch last year, to the picturesque Somerset venue where it all started, welcoming a host of rather funny guests. Millie Bruce-Watt chats to award-winning comedian and festival organiser Jarred Christmas

The Rode Comedy Festival is returning for its second year with an incredible line-up of big-name acts, Olivier Award-winning West End shows and a whole host of comedy legends. Taking place in the picturesque Somerset village of Rode, audiences can enjoy four days and nights of performances beneath a stretch tent in the open autumn air.

Kicking the festival off on 9 September will be the award-winning improvised production Showstopper! The Musical, with an intimate performance of their West End show. The Showstoppers will create a brand-new musical comedy from scratch as audience suggestions are transformed on the spot into all-singing, all-dancing productions with hilarious results. With 12 years as an Edinburgh Fringe must-see phenomenon, a BBC Radio 4 series, a critically acclaimed West End run, and an accolade of awards to their name, these musical masters are guaranteed to impress on the opening night.

Friday night will see the return of the hilarious Scummy Mummies with their brand-new riotous, warts-and-all show. In support is Daisy Earl, one of the fastest rising stars in comedy today. In 2015, Daisy was crowned Scottish Comedian of the Year, making her the first-ever female winner.

On Saturday night, the festival will present TV superstar presenter, comedian and best-selling author Joel Dommett, who will bring you bang up-to-date on his life since his last live show. To close the festival on Sunday night, the likes of Stephen K Amos (BBC’s Live at the Apollo, The Royal Variety Performance), Mike Wozniak (Taskmaster and Man Down) and BAFTA-nominated comic Spencer Jones will grace the stage.

The brains behind the stellar line-up are Kiwi Somerset-local, multi-award-winning comedian, actor and writer Jarred Christmas and his wife Amelia, a creative arts PR who has worked at London’s Design Museum and for several major book publishers. Together they run Pop-Up Comedy, organising shows in unique venues across the south west. This month, we caught up with Jarred to chat about all things comedy and what exactly we can expect from the four-day extravaganza.

“This year’s festival really has something for everyone,” Jarred tells me. “The reason we went for Showstoppers, other than it being such an incredible show, is that we wanted it to be the full spectrum of comedy. We loved this whole idea of bringing the West End to the west country, bringing a show that has been on incredible stages around the world and chucking it in a field in Somerset. If you like musicals and you like comedy, then this is ticking all the boxes.”

The festival is not only offering the chance to see an array of famous faces in a beautiful corner of Somerset, but the rare opportunity to see some of the nation’s most-loved comedy geniuses, many of whom are no longer doing live intimate shows.

“Joel Dommett from The Masked Singer has always been a brilliant stand-up comedian. We’ve been trying to get him to perform for us for a long time so to finally get him for this festival is very exciting,” says Jarred. “Mike Wozniak is doing a real live performance – he doesn’t do a huge amount of that anymore so it’s quite special that we’ve got him. Spencer Jones is pure silliness. I always watch him thinking ‘an act like this can only be created in the UK’. He embraces all that Vic and Bob craziness with Tommy Cooper with Bill Bailey-level music – it’s clowning, it’s proper stand-up, it’s music, it’s brilliant. And then to finish everything we’ve got an absolute legend of Stephen K. Amos – it’s going to be a lot of fun.”

The festival first launched last September in response to the catastrophic effects the pandemic had on the comedy industry. After Pop-Up Comedy’s run of successful outdoor shows over the summer of 2020, the local team were inspired to work more creatively, delivering comedy in new ways. Headliners for 2020 included stadium-level comedians whose national tours had been postponed including Russell Kane and Russell Howard. “People still wanted entertainment and comedians still wanted to work,” says Jarred. “It was electric to get back up on stage last year. For us as performers there was an excitement to it which was really reciprocated from the audience. The response was overwhelmingly positive. Certainly the last year and a half has made me creatively start figuring out other ways to deliver comedy, be it online or in these incredible outdoor scenarios.”

Modestly, Jarred credits the effort of local suppliers for last year’s sell-out success. Working with friends Emma and James Burton at Pitch Perfect Camping, where the festival will take place once again, the team at The Cross Keys Rode, who will supply the food, and Butcombe, who will provide the drinks, the event is very much a local setup.

“Pitch Perfect Campsite is in such a lovely setting,” he says. “As a comedian I’ve been doing stand-up for the last 22 years and the silver lining of the last year or so is realising that you can do comedy in beautiful surroundings instead of dingy bars. It’s a new experience for me, being on stage and getting heckled by birds. There are stables next to the campsite so every now and then through the night you hear horses whinnying so it really added to the atmosphere. To be honest, we couldn’t have done it without the support from The Cross Keys, Pitch Perfect, Butcombe and a bit of a community vibe.”

Jarred, who will be joining forces with international beatboxer and loop-station champion Hobbit to welcome the line-up on Sunday night, has appeared on some of Channel 4 and the BBC’s most popular comedy panel shows, including 8 out of 10 Cats, Never Mind the Buzzcocks and Mock the Week. In 2010, he won the Chortle Comedy Award for Best Compere before going on to set up Pop-Up Comedy in 2015. He has appeared on radio, film, television and stage around the world and has been a favourite headliner on the UK comedy circuit for decades.

Highly praised for last year’s success, this year is set to hit the same heights. With big names continuing to support the festival, there are high hopes for the future of Rode Comedy. “There’s nothing like it in this immediate area,” adds Jarred. “Bristol has the Comedy Garden Festival and that is ginormous, but we want this boutique, family-friendly event in a beautiful scenario serving this local area. All we’re trying to do is get back on stage, but also provide a brilliant evening of entertainment.” And no doubt brilliant it will be.