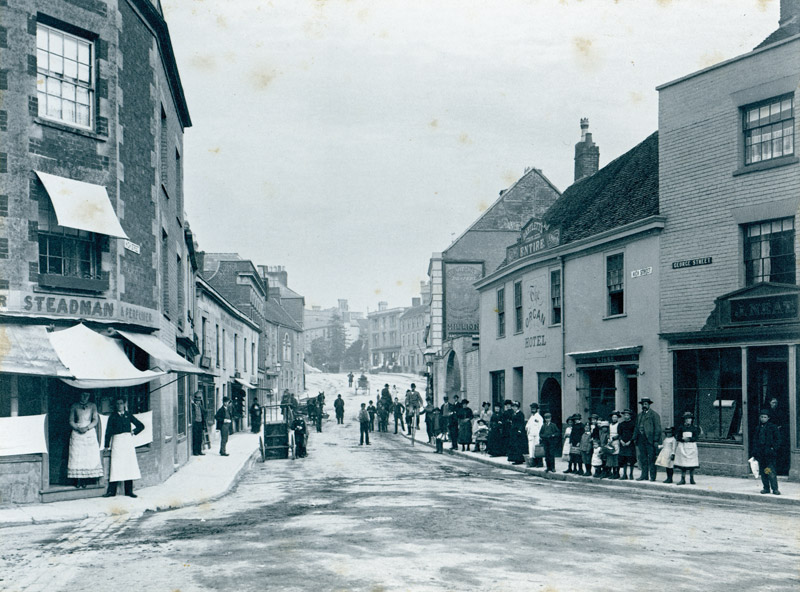 Andrew Swift takes us on a journey through the historic town of Warminster – choose either the full walk starting on the downs and continuing through the town, or just follow the street walk following the town’s architectural milestones

The town of Warminster – referred to in The Domesday Book in 1086 as Guerminstreis – is only 35 minutes from Bath by train. Its grandest houses, which were built by clothiers in the early 18th century, stand alongside cottages and workshops, while the building materials range from squared rubble stone and local brick to ashlar stone.

Warminster is surrounded by downland, with three massive Iron Age hill forts overlooking the town. This walk starts with a short walk up to the downs before heading back to explore Warminster’s streets. You could also just do the town walk.

Arriving at Warminster station from Bath, do not cross the footbridge but head into the car park and turn left along the approach road.

• If you just want to do the town walk, turn left under the railway, continue straight on along a path and turn right at the end. After 150m, turn right along another footpath. At the road, cross over, turn right and then left along Portway Lane. After 500m, opposite Sherwood Close, turn left through an avenue of trees – and skip to*.

• For the full walk, after turning left along the approach road, take the path on the right-hand side and follow it as it turns right uphill. When you come to a road, cross and continue up to a lychgate on which are carved the dates of the two world wars. Cop Heap, the hill behind it, was dedicated as a war memorial in 1950.

After climbing a few steps, turn left through a kissing gate and follow a track uphill beside the fence. As it levels out, bear away from the fence and follow a faint track across the field. At a waymark, head towards a gate to the right of some bungalows. Turn left along a road for a few metres, then right up a rough track and right again to follow an Imber Range Path sign to the left of a house.

After 250m, the track curves left up a holloway to emerge on the downs, curving round the lip of a vertiginous scoop of land called Kidnapper’s Hole. This is claimed to be one of the sites where UFOs landed in the 1960s and 1970s, when Warminster was the UFO capital of England. Looking east from here you can see two hill forts – Battlesbury Camp across the valley, and Scratchbury Camp in the distance.

The track soon starts descending through woodland. Carry on down in the same direction, ignoring tracks branching off.
At the bottom, go through the remains of a kissing gate, head down to a road, cross and turn left along the pavement. After 120m, by No. 19, turn right along a footpath. After crossing the railway, turn right along a road and follow it as it swings left and left again. After another 85m, with Sherwood Close on your left, turn right through an avenue of trees. Here the two walks join up.

* After crossing the meadow, the path leads over the diminutive River Were, which gave Warminster the first part of its name. At the end of the path is the minster church of St Denys, which provided the second part.

Turn left along Church Street, passing the grammar school of 1707 on the left. A little further along, at No. 30, is the National School of 1815, still with its original sign. Byne House – No. 40 – was built for a wealthy clothier in 1755 and sports a splendid Venetian window – something of a Warminster speciality. Just beyond it is a Warminster Turnpike Trust milestone in the wall.

The obelisk at the end was built in 1783 to commemorate the enclosure of the parish. Through the gates to the right of it can be seen the former lock-up. Continue along Silver Street, home to some of Warminster’s most fascinating independent shops.

Carry on at the mini-roundabout, cross at the zebra crossing and head back to turn left into Sambourne Road. If you look across to the Farmers Hotel, you will see a ghost sign from 1860 above the entrance. Cross another zebra crossing to a cottage with a plaque commemorating Queen Victoria’s Diamond Jubilee, and head along Emwell Street. The Weymouth Arms, on the left, is a compendium of local building materials. The older, central block is of coursed rubble stone, albeit with bricks interposed, while the two rather more imposing wings are faced in brick.

Continue along Vicarage Street. Wren House, near the end, was probably built in the 1720s, while Tudor House, next door, is a jettied building dating from the 16th century.

Turn left into Pound Street to find Warminster Maltings, the only surviving stand-alone traditional maltings in Britain. Carry on past Cobbett Place and take the next left.

At the end, turn right and right again into The Beeches. After 200m, you will see a two-storey ashlar and rubble stone building ahead. This is Warminster Workhouse, built in 1837, and its homely facade hides something very different, as you will see when you bear left to follow the road round to the blocks where the inmates lodged. Although converted to housing in the 1990s, after being used as a hospital, it is still possible to sense the dread this institution must have instilled into generations of local people.

Follow the road round and retrace your steps to the main road. If you fancy a break at this point, an award-winning traditional pub, the Fox and Hounds, is 200m along on the right. Otherwise, cross the zebra crossing, carry on across another zebra crossing and straight on along Upper Marsh Road. Take the second left along Ferris Mead and at the end bear right through a kissing gate. Head diagonally downhill alongside a fence and go through another kissing gate into Smallbrook Meadows Nature Reserve.

If you want to explore the reserve before continuing with the walk, there is a map on an information board by the gate. Otherwise, cross a footbridge over the River Were and turn left through Lakeside Pleasure Gardens, laid out in 1924 as a work creation scheme on the site of the town’s rubbish tip. At the end, turn right and, when you emerge on the road, cross and turn right uphill, looking out for a couple of ghost signs opposite.

At the top, turn left along High Street. As it drops downhill, you will see a couple more Venetian windows on the right. Beyond the ashlar-stone elegance of the Chantry lies Bartlett’s Brewery, which closed in 1920 after being taken over by Usher’s of Trowbridge. On the left is a pub once owned by Bartlett’s, the Organ. Dating from the 1770s, it closed in 1913, but reopened 93 years later, in 2006. Not only is it one of the finest traditional pubs in Wiltshire, it also has an art gallery upstairs.

At the zebra crossing, cross and double back to turn left along Portway. Behind the splendidly unrestored No. 22 on the right is the ivy-covered malthouse of Bartlett’s Brewery. Portway House, at the end, is Warminster’s only Grade I-listed building. It was built in 1722, but the front door was later replaced by a single-storey bay whose insertion seems to have caused the windows above to sag.

Cross at the traffic island, turn into the Close to return to the High Street and turn left. Continue into the Market Place, which is still lined with inns recalling the town’s heyday as a coaching centre. The oldest is The Bell, dating back to 1493, although it was rebuilt in the 18th century.

From here, a left turn at the end leads into Station Road brings you to the end of the walk.

Andrew Swift’s Country Walks from Bath is available from bookshops or direct from akemanpress.com. Andrew is also co-author, with Kirsten Elliot, of Ghost Signs of Bath