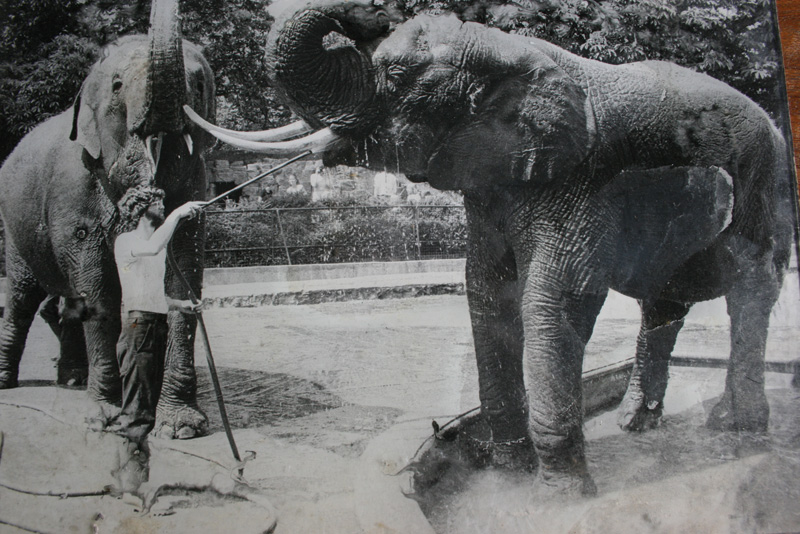 Bristol Zoo’s longest-serving keeper recently retired, marking the end of an era at the stalwart city attraction. He reminisces on a remarkable career encompassing everything from everyday elephant encounters to hand-rearing hippos.

It’s almost 45 years since John Partridge first set foot in Bristol Zoo Gardens to begin work as a keeper. Since then he has formed some quite remarkable friendships with animals in his care. He is the calm voice of experience, the person to whom everyone turns. No other current keeper has worked at the zoo as long as he has.

“It was a job I always wanted to do. I’ve loved every minute of it,” he says in his gentle Welsh lilt, although his careers teachers were not that impressed when he told them he wanted to work in a zoo. “They said it wasn’t well paid and there was no future in it,” he recalls with a smile. But from the moment he arrived at Bristol Zoo in 1975 he has never regretted it and over the years he has risen through the ranks to his present role, senior curator of animals, which he took on 12 years ago.

He has formed close bonds with many animals including Wendy the elephant, who was very popular with visitors to the zoo. But one day she literally sent him flying across her paddock when John was helping a vet inspect her feet. “She calmly lowered her head and pushed me,” he remembers. Typically he blamed himself. “She hadn’t been well and I shouldn’t have let the veterinary inspection go on for quite as long as it did,” he said. “I went back to her about 10 minutes later. We had a few words and we were friends again.”

He had a gentler encounter with another elephant called Christina. She was delighted to see him when he returned from the Middle East after three months away. “She had a habit of putting her trunk on top of my head by way of recognition. And that’s what she did. It was as if another elephant had returned and she wondered where I had been.”

John’s career began as a volunteer at Barry Zoo in his native South Wales. He was in his late teens, working in the education department of Glamorgan County Council and spending all his weekends at the zoo. “It was brilliant but tiring. I would come home on a Saturday night and fall asleep in a chair,” he says. He kept pestering the twin brothers who owned Barry Zoo until they gave him the opportunity to volunteer there. “I learnt how to look after lions, elephants, bears and a chimpanzee. It was very exciting.”

The chimpanzee, called Melody, would sometimes bring a piece of straw to John so he could tickle one of her feet. She later went to live at Twycross Zoo and nine years later John paid a visit. “She came to the mesh, looked at me and then walked away. I thought she hadn’t recognised me,” he says. “Then she picked up a piece of straw, came back, gave it to me and pushed her foot up against the mesh demanding a tickle. That was absolutely amazing.”

Melody and Wendy were two of his favourite animals as well as an orangutan called Henry. “Henry was such an intelligent, powerful animal,” says John. “I also have an affection for pygmy hippos. I hand-reared one in 1981.”

John helped design and set up several of Bristol Zoo’s animal buildings, including ground-breaking Twilight World, and also worked in the reptile house and aquarium. It’s a place that has truly defined his life – it was there that he met his wife, Kate, when she worked in the accounts department. That was 42 years ago and they went on to have two daughters, Nicola and Joanne, who are both married with children of their own – Jordan, Owen, Florence and Betty. Retirement will give John a chance to help with meeting his grand-daughters from school, and make up for family occasions he has missed – such as that time an anxious elephant caused him to miss his mother-in-law’s birthday.

“The elephant had just arrived and I wanted to make sure she was alright. I was supposed to be off but I ended up at the zoo for most of the weekend,” he says. “It’s not a nine to five job or a Monday to Friday job. It’s a vocation. But it helps to have an understanding wife. My wife has been so amazing.”

John has a Christmas afternoon tradition of coming into the zoo to check all is well – a tradition he’s just partaken in for the final time and one he will greatly miss once he leaves the zoo this month. It will be the end of a career that he has loved.

“Good zoos, and this is one of the best ones, should always exist. We have pioneered many changes that are taken for granted now, such as using glass around the enclosures of big cats and bringing in heated dens to encourage polar bears to breed,” he says, pausing to look out of the window across the grounds. “It’s been a real privilege to work with so many amazing people and animals at Bristol Zoo.”