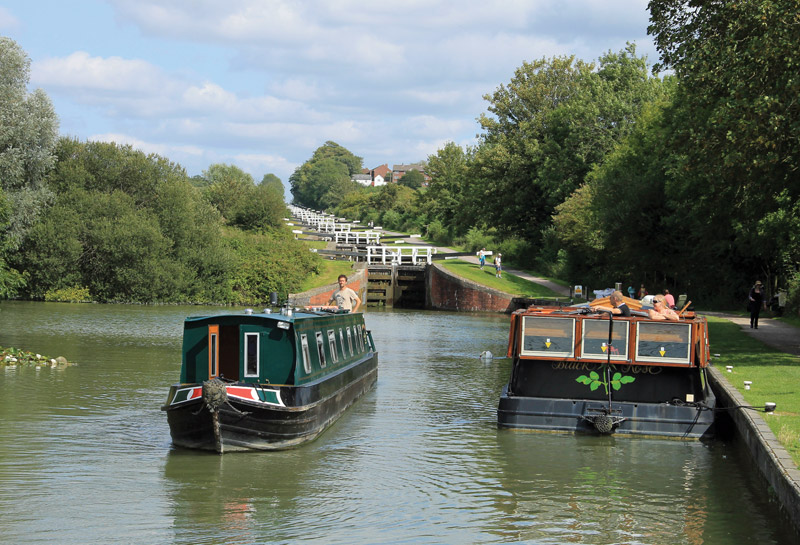 A succession of green lanes, a Norman castle, views over Salisbury Plain and a towpath with a dramatic flight of 16 locks are the highlights of Andrew Swift’s circular walk from Devizes

This month’s walk is ideal for a sunny autumn day. Six and a half miles long, it starts in the heart of Devizes, before following green lanes westward to Poulshot, home to a classic country pub and one of the largest village greens in Wiltshire. From there, another green lane heads north to the Kennet & Avon Canal, whose towpath leads back to Devizes, past the Caen Hill flight of locks – one of the wonders of the canal network.

While some of the green lanes may be muddy or overgrown, the walk only crosses two fields – in which barley was grown earlier this year, so there should be no issues with livestock – and only two stiles (one optional) are encountered en route.

To get to Devizes from Bath, either drive or take the X72 bus, which runs hourly and takes just under an hour. The easiest place to park is the long-stay car park at Devizes Wharf, while the bus will drop you in the market place, where the walk starts (SU003614).

The most famous building in the market place is The Bear, once a grand coaching inn. The painter Sir Thomas Lawrence spent part of his childhood at the inn, where his father was the landlord.

As you head past the Bear into St John Street, you will see the town hall, designed by Thomas Baldwin of Bath, ahead. Head to the right of it, looking out for a door at the back into the town’s lock-up. Carry on past St John’s Court into the churchyard and turn right.

After passing the Sexton’s Cottage, the path leads across a bridge over a disused railway line which once linked Devizes with London. Above the tunnel to your right is Devizes Castle. Little of the original Norman castle survives, and much of what you see was designed by Henry Edmund Goodridge of Bath in the 19th century. Go down steps and carry on, ignoring turnings on the left as the path curves right, and, at the end, cross and head along Hartmoor Road (SU002610). After 250m, this suddenly dwindles to a narrow tree-lined lane, with banks on either side looming ever higher as it drops downhill. Before long, though, the banks end just as suddenly and you emerge into the light of day by Hartmoor Farm.

When you come to a lane, turn right, and after 35m, just past a turning to Five Lanes, turn left following a footpath sign through a gap in the hedge (ST984596). Follow a track across a field, cross a stile in the hedgerow and follow a track straight on beside the hedge. After 300m, as you approach the end of the field, the track weaves away from the hedge across the thistly ground, towards a bridge over a ditch.

After crossing it, make for a gap in the hedge ahead and carry on along a green lane. Unlike Furze Hill Lane, this green lane – known as Hay Lane – really is green, as it seems to be little used by farm vehicles.

Hay Lane runs straight and levels for around 750m before it curves to avoid Poulshot’s expansive village green. When you come to a lane, a short diversion to the right leads to the Raven Inn, a resolutely traditional pub with lunch served daily, barrels behind the bar, and a splendid garden (ST970601).

To continue the walk, however, head straight on along Barley Hill Lane. Carry on past Poulshot Nurseries and, after another 350m, turn right along a stony track called Hooks Patch Lane. As you head north, you can see Roundway Hill – the site of a Civil War battle in 1643 – in the distance.

After 600m, the stony track comes to an abrupt end (ST968609). Ahead is a large gateway, with the tracks of farm vehicles leading across a field. Resisting the temptation to follow them, bear left along a faint track through the undergrowth. Although it may not look like it, this is the continuation of Hooks Patch Lane, and after 100m, when the track curves right, you can clearly see a hedge on either side. Long abandoned, except by intrepid walkers, its surface is potholed and uneven, so you need to watch your step.

In either case, follow the drive as it swings right, but, when it swings left by large white gates, bear right alongside a fence. Go through a handgate a little way along and follow a waymark between holiday homes before bearing left along a grassy track to a handgate. This leads onto the canal towpath, along which you turn right (ST968616).

Since leaving Devizes, you have descended almost 70m. Over the next couple of miles, you will head back up. While that is unlikely to pose any problems, you will be following a canal towpath, and for a canal to make such an ascent is another matter entirely. This is why Devizes is one of the most famous places on the entire canal network.

Things start off routinely enough, with a series of well-spaced locks. It is only when you pass under Bridge 144 that you see what makes Devizes special. The Caen Hill flight, which lies head, consists of 16 locks, one above the other, separated only by pounds which replenish the water lost as boats pass through them. It is an extraordinary sight, but, as you climb alongside them, admiring this engineering marvel, spare a thought for the boaters working their way up or down.

At the top of the flight is a café, a good place to look back and get a sense of how far you – and the canal – have climbed. There are still six more locks spaced out over the next 1,250m, and, when you come to the last of them, by Bridge 141, the towpath switches to the left bank of the canal.

From here, the quickest way back to the Market Place is to head east along the main road. For the Wharf, however, carry on along the canal and cross back over at the next bridge.

More walks along the whole length of the canal, as well as the history of its construction, abandonment and restoration, can be found in Kirsten Elliott’s Queen of Waters: A Journey in Time along the Kennet & Avon Canal, published by Akeman Press