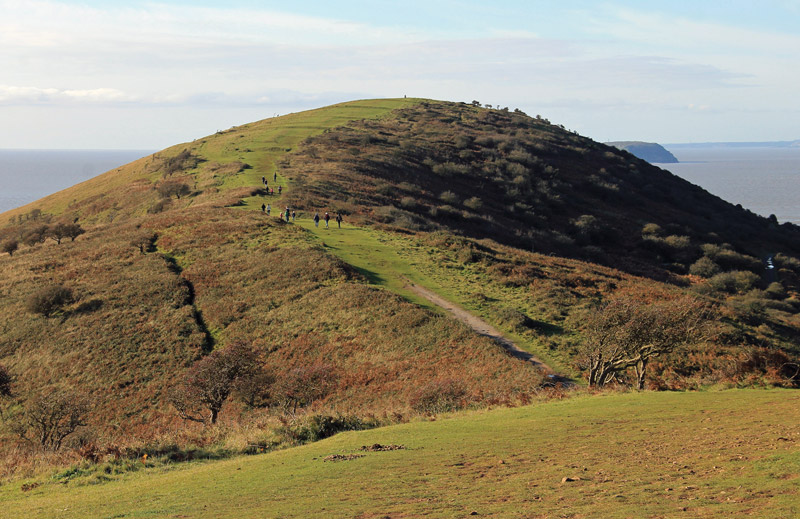 Walk: Make tracks to Brean Down

Start the year off with a stimulating walk along an uplifting stretch of coastline. Andrew Swift makes his way along the breezy headland of Brean Down and encounters a Second World War observation post, a 19th-century fort and views over the bay

Brean Down, which outlies The Mendips, jutting one and a half miles into the Bristol Channel north of Burnham on Sea, forms one of the most spectacular stretches of coastline in the south west. If your New Year’s resolution is to get more exercise, there is no better way to start than with a brisk walk along this breezy headland. Not only are there superb views in every direction, but at the end of the promontory is a massive abandoned fort which is free to explore.

Although the walk includes rough and rocky tracks, and a steep flight of steps, there is the option of following a more accessible route along an old military road from the car park to the fort. Two all-terrain mobility scooters are also available for hire from the National Trust hut in the car park.

There are a couple of caveats, however. The cliffs are sheer and steep, and, although the paths do not run along the edge of them, several dogs die every year by falling off them, often while chasing wild goats. The fort, meanwhile, has high walls and long drops, and, while children will undoubtedly regard it as an adventure playground, parts are potentially hazardous. For adults, though, on a clear and sunny day, it is one
of the best places imaginable to blow the cobwebs away.

To get to Brean Down from Bath, you can either drive across country or take the motorway and leave at junction 22. For the last leg, you can either follow the coast road north from Burnham on Sea or take a turning off the A370 through Lympsham and head for the coast along a network of lanes. Whichever way you go, the road ends at a National Trust car park, with Brean Down looming high above (ST296585; TA8 2RS).

For the more accessible route, follow the road to the right of the cafés. After 200m bear left up a gravel track and continue along it for 1.5 miles to reach the fort.

For the standard route, take the 60m flight of steps ahead, zig-zagging up to the down. At the top, you are rewarded with magnificent views – eastwards to the clifftop church at Uphill, southwards over the shining sands of Brean, and northwards over Weston Bay. The long, low white line you can see 18 miles away on the Welsh coast is Llanwern Steelworks.

As you bear left across the grassy sward, the view ahead is largely obscured by the down, rising another 20m. Down to your right, though, you can see the military road, with Flat Holm, and its lighthouse, six miles out to sea. Beyond it is the Welsh coast, with Barry to the left, Penarth and Cardiff to the right.

When you reach the first summit, it is worth turning to take in the view back toward Uphill and the Mendips. From here you can see the whole expanse of the down, with its few trees leaning inland away from the prevailing wind.

Migrating birds use the down as a stopping-off point and at this time of year you may see skylarks, meadow pipits, stonechats, jackdaws, ravens, crows, redstarts, thrushes, fieldfares, redwings, kestrels and peregrine falcons.

The track descends before climbing past a series of ridges which formed part of a medieval field system. The next summit is Brean Down’s highest point – 97m – and is marked by a trig point. A little further on, as the land shelves away, you can see the fort far below, with the island of Steep Holm beyond.

The climb down to the fort is the trickiest part of the walk – steep, rocky and slippery – and you may want to opt for a slightly easier option, taking a track bearing right to join up with the military road.

Carrying straight on down, you come to a Second World War Two observation post, whose dim, damp interior and commanding views of the channel approaches is an atmospheric introduction to the fort, built between 1862 and 1870 due to fears of French invasion. A dry moat protected it on the landward side, while treacherous rocks, reefs and riptides made it all but impregnable to attack by sea.

A shot was never fired in anger, but in 1900 a gunner discharged his carbine down a ventilator into a magazine packed with gunpowder, blowing himself and much of the fort sky high. His motive was not established, but, instead of being rebuilt, the fort was decommissioned and later became a café.

During the Second World War, the army returned. New gun emplacements were built and the fort became a weapons testing ground. A short railway track leading to the edge of the cliff is the legacy of an ill-fated attempt to develop a flying bomb. The bomb was loaded onto a trolley which was propelled by rockets along the track. The idea was that when the trolley hit the buffers, the bomb would be catapulted far out to sea. Unfortunately, the trolley ripped through the buffers and the buffers, trolley and bomb flew off into the channel before swinging round and exploding inland.

After exploring the fort, take the military road along the northern side of the promontory, with views over Weston Bay. After about a mile, as a WWII building comes into view, bear right across the down towards a gun emplacement with a large concrete arrow embedded in the turf to the left. This dates from WWII, when it directed trainee pilots towards bombing ranges.

From here, bear right along a track leading to the steps down to the car park.

Andrew Swift’s Country Walks from Bath is available from bookshops or direct from akemanpress.com. Andrew is also co-author, with Kirsten Elliot, of Ghost Signs of Bath

• Distance: 3.5 miles
• Start point: National Trust car park, Brean Down TA8 2RS (ST296585); £2 a day, free to NT members
• Accessibility: The main route includes steps and steep sections. An alternative route is available for those with mobility difficulties, and an all-terrain mobility scooter can be hired (see nationaltrust.org.uk/brean-down)
• Facilities: There are cafés and toilets by the car park at the foot of Brean Down
• Suitability: Children need to be supervised and dogs kept on leads (and there is plenty of beach for them to run free after the walk)
• Map: OS Explorer 153