Walk: In the footsteps of Jane Austen

Ambitious plans to restore Sydney Gardens, once called Bath Vauxhall Gardens, to their former Georgian glory await approval. Kirsten Elliot enjoys a historic walk and visualises how the pleasure garden may have looked in the 18th century

When Jane Austen came to live in Bath, her only consolation was that she would be opposite Sydney Gardens, which had been open for nine years. Right from the start, it was a green oasis. “The foliage is so luxuriant as to afford ample shade”, wrote a correspondent to the Bath Chronicle in 1795. It also afforded “beautiful prospects”. Today, the tall trees hide most of the views. Sydney Gardens are very different from when they attracted thousands of visitors in the late Georgian period. At present they look somewhat neglected, but in August the council is making an application to the Heritage Lottery Fund (HLF) for a grant to revive the fortunes of this unique garden. A successful application would transform the quiet park back to the vibrant place it was intended to be.

Start at the front gate of the Holburne Museum, by gazing down Great Pulteney Street. Sydney Gardens were intended as the hub of the Pulteney estate, with Great Pulteney Street forming a grand approach to the city. On the horizon at the far end you can see the trees on top of Twerton Roundhill. In the 18th century this was known as Barrow Hill and believed to be the burial place of Bladud.

For Georgian visitors seeking vigorous exercise, a ride, equipped with leaping bars, encircled the gardens. Most visitors to Sydney Gardens wanted to enjoy the attractions within. They would have entered through what is now the Holburne Museum. Late in 1796, work began on the building, described as a tavern with banqueting room, coffee and billiard rooms. In 1853, the hotel failed and was converted to a college. A new entrance was made to the gardens, and in 1857 a gatekeeper’s lodge, now tucked away behind the old tea-room, was constructed, originally with a thatched roof. Walk to the back of the Holburne. Two crescents of alcoves once enclosed this space, where visitors dined, watched firework displays, or listened to music.

Walk up through the gates to the central promenade, and cross the lawn to your right, formerly a bowling green, heading for the iron railway bridge. A serpentine path once led towards the entrance to a grotto and labyrinth, but all that changed when Brunel brought the railway though the gardens in 1840. Stop in the middle of the bridge and look to the right, to see a large flat area, designed as a viewing area to watch the trains. Before the railway came, the grotto, which was also the exit from the labyrinth, would have been over to your left, with the labyrinth looming up ahead of you. 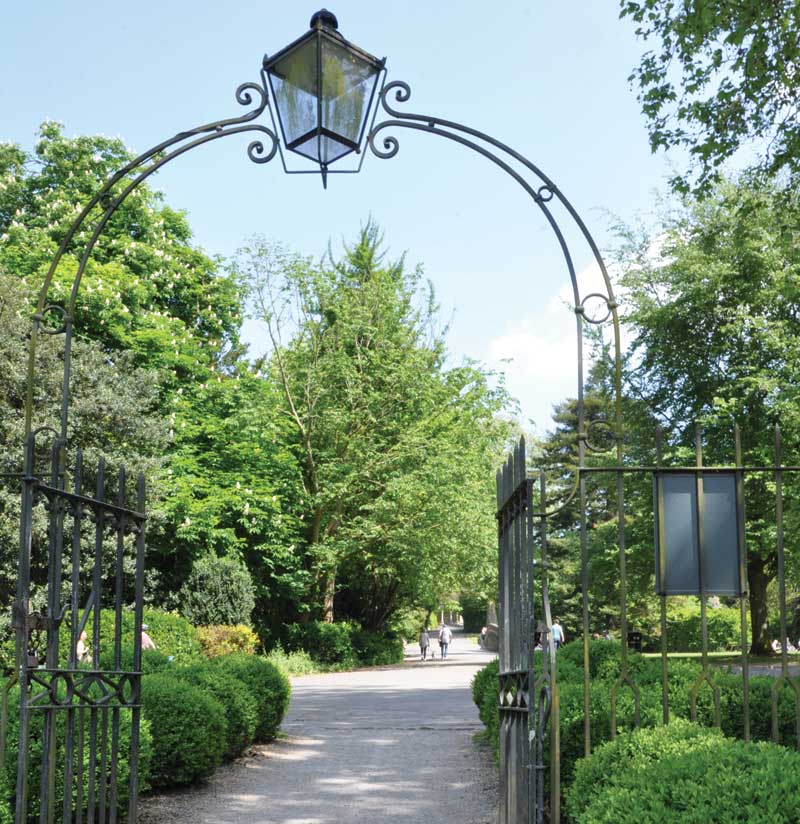 Looking up to the loggia from the Holburne rear gate

The labyrinth was one of the original attractions. It was described as one of the most intricate and extensive in Europe, and at its centre was a Merlin Swing, the fore-runner of the modern swingboat, named after its inventor JJ Merlin. Steps led from the swing through a tunnel to the grotto.

Although much of the labyrinth survived the coming of the railway, the grotto did not, although there is evidence to suggest it may have been rescued and later reconstructed in the grounds of the Bath Spa Hotel. The labyrinth was further reduced when part of the ride and garden were sold in 1853 so that two houses could be built there. It was last mentioned in 1867, but there are plans to reinstate it on the other side of the canal as a grass maze. Fortunately, the owners of Glendurgan Gardens in Cornwall decided, in 1833, to copy it, so we still have a good idea of its appearance.

Walk up to cross the Kennet and Avon canal on the first iron bridge. To your right is the western tunnel portal bearing the face of Sabrina, spirit of the Severn. The canal was allowed through the gardens in 1800, after payment of 2,000 guineas to the proprietors, and the promise of decorative bridges. Just above the water level you will see a lump of stone over which water runs. This is a 200-year-old accretion of limescale.

Continue across the bridge. Ahead are sunken stone walls with iron doors. These form the entrance to reservoirs which supplied water to Bathwick. Walk past the tennis courts, where originally there were simple swings, to the loggia. This is all that remains of an original feature. It was once longer, with a serpentine façade, and two charming carved cherubs on the central bay. In 1938, however, the council restored it by chopping off the sides, a decision greeted with dismay by many. Although not mentioned in the HLF plans, one might hope that, of all the lost features, the loggia would be restored.

Head down the main path to cross the canal on the second iron bridge. To your right is the eastern tunnel portal, with Old Father Thames above the arch. The Kennet & Avon was the link between the Thames and Severn. The canal was not accessible from the gardens until the 1990s when a gateway between the bridges was installed. After crossing the bridge, take the path on your right. As it curves round to approach the railway you will see a gap in the trees, which was the site of the moated sham castle, often the centrepiece for firework displays. Beyond it is a deserted nursery, occupying part of the ride, which is planned to be reabsorbed into the gardens.

Turn left alongside the railway to head back to the central promenade, and cross the bridge. Immediately in front of you is a representation of Minerva’s Temple. Designed as Bath’s exhibit in the Empire Exhibition of 1911 at Crystal Palace, it was erected here in 1913 to commemorate the Bath Pageant of 1909. Although the pageant was in Royal Victoria Park, the fringe events held here attracted more visitors. Turn right on the path which runs parallel with the railway until the tarmac runs out. Beyond it is a gravel surface which is the only surviving piece of the ride’s macadamized surface, dating from 1825.

Turn back and take the path on your right, which leads past the children’s playground – there are plans to extend and improve this. The lawn on your left as you pass the tennis courts was formerly the small bowling green. In 1840, the Horticultural Society erected a rustic pavilion here, with a rockery and fountain behind it. Only the rockery remains very overgrown. The pavilion was designed by Edward Davis, who was also probably responsible for the gardener’s lodge, which you see as you reach the end of the path.

Down to your right, you see the paybox of 1914, designed by AJ Taylor. Lurking behind the modern loos is one of a pair of iron loos, installed in 1914. The other, in rather better repair, is the gents, on the far side of the modern block. It is planned to restore both of these rare survivals and put them to alternative use. Finally, return to the main promenade where, in bushes on your left, a bandstand was erected in 1861, only to be demolished in 1948 for lack of money needed to repair it. A HLF grant would mean that the gardens’ surviving features will not suffer a similar fate.

More information about the park and the proposed development can be found at bathnes.gov.uk

The Holburne Museum is open daily from 10am to 5pm; holburne.org