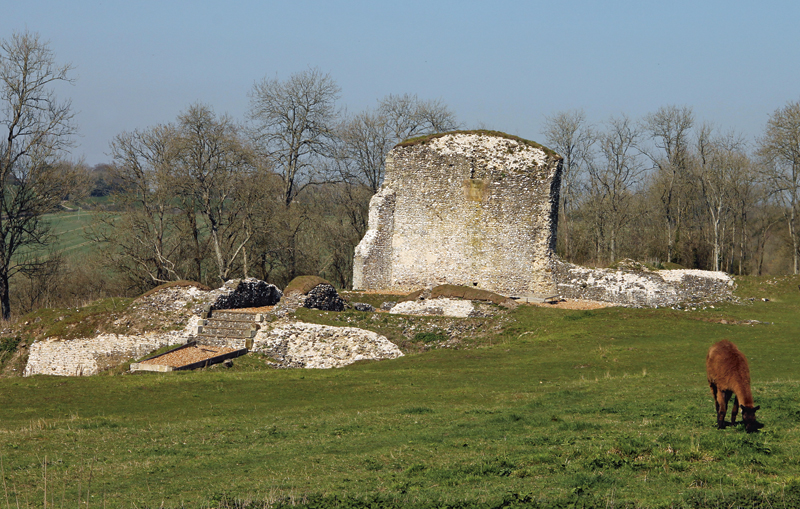 Walk: From West Dean to Salisbury

A 12th-century palace steeped in royal history, roaming alpacas and a couple of quaint country pubs are among the hidden gems that feature on Andrew Swift’s linear walking route from West Dean to Salisbury

Clarendon Palace, three miles east of Salisbury, was established as a royal hunting lodge shortly after the Norman Conquest. By the mid-12th century, it had become the venue for meetings of the royal council and special assemblies. In 1164, around 1,800 people were summoned to Clarendon during the crisis occasioned by the quarrel between Henry II and Thomas Becket. In 1357, Edward III moved his court there as the Black Death ravaged his kingdom.

The last king to spend any length of time at Clarendon, however, was Henry VI, who, while staying there in August 1453, fell into a catatonic stupor which lasted over a year. Possibly because of the memory of Henry’s ‘great illness,’ later monarchs shunned the palace, although the deer park continued to be maintained. By the time Elizabeth I turned up for a day’s hunting in 1574, the buildings were so ruinous that a marquee had to be erected for the royal party.

Today, the deer have departed and alpaca roam where kings once held court. The only part of the palace still standing is the east wall of the great hall. Although the size and extent of the buildings that once stood here is still apparent, the sense of abandonment is overwhelming. And, while the site is free to wander, hardly anyone does. A few weeks ago, on a sunny afternoon in the Easter holidays, I had the place to myself. While this is partly due to the eerily unspectacular nature of the ruins, it is largely because you cannot drive there. You have to walk – and walk a considerable distance.

I had long wanted to feature Clarendon in a walk, and, having failed to come up with a decent circular walk, decided that a linear walk was the only answer. Having now walked it twice, I am happy to report that it improves on further acquaintance. Not only does it traverse one of the most unspoilt parts of Wiltshire, much of it lies through ancient woodland, with a distinctly medieval feel to it. En route, it passes two extraordinary churches, and it ends by weaving through one of the most historic parts of Salisbury. Best of all, there is a choice of two country pubs for a leisurely lunch.

Getting there by train is relatively straightforward. The walk starts at West Dean, which has a station, known as Dean (Wilts), served by local trains from Salisbury. To get there from Bath Spa, you need – if you are going to make either of those pubs for lunch – to catch the 8.37am or 9.36am to Salisbury (both of which run a minute earlier on Saturdays) and change there for a local train to Dean. Getting back is even simpler – just hop on a train at Salisbury.

Leaving Dean station, turn right to head north through the village. After 300m, turn left to the Borbach Chantry, which can be found in the old churchyard. Most of the church was demolished in 1868, but the chantry, which formed its south aisle, was spared. Now cared for by the Churches Conservation Trust, it contains some magnificent tombs, including one to Robert Pierrepont, Earl of Kingston.

Leaving the churchyard, turn left past the tree-covered site of a Norman motte, before turning right to return to the lane and continue north along it. After 1500m, bear left along Scouts Lane, and after another 600m turn left along a track into Bentley Wood (SU264293). This 1700-acre nature reserve is famous for butterflies, and at this time of year is also full of birdsong and bluebells.

Continue along the track for two miles, and, when you come to a road, take the turning ahead signposted to Farley and Salisbury (SU234288). After 950m, turn left at a T-junction to the Hook and Glove pub (SU224292). Just past it, turn right along a footpath, and, when you come to a lane, turn right to find two Grade I-listed buildings – Fox’s Hospital, built in 1681 and All Saints church, built eight years later.

Carry on for 100m and turn left along a track signposted to Pitton. After 575m, when five footpaths meet, carry straight on. After another 200m, bear left along a narrow track (SU224303). Carry on in the same direction for 1400m, climbing for much of the way, until, after going through a kissing gate (KG), a steep and slippery path leads down to the village of Pitton.

Turn left at the bottom, and at the T-junction turn right past the Silver Plough pub (SU212312). At the crossroads turn left, and after 175m turn right along a footpath with a Clarendon Way sign. After 100m the path swings left between fields. After another 750m, carry straight on, keeping to the left of two large barns, to follow a broad track through the woods (SU201311).

Mighty conifers, intermingled with beeches, soon give way to something gentler – a mixture of ash, hazel, wild cherry, beech and rowan. After about a mile mixed woodland yields to hazel coppice, with a few timeworn oak, ash and beech trees. When you come to a broad track, turn right along it and, after emerging into the open, bear right towards the site of Clarendon Palace and go through a KG (SU183301). Information boards tell the story of the palace, but this is no manicured heritage attraction. The ground is rough and overgrown, and you need to watch your step.

At the far end, head through a KG to rejoin the broad track heading westward. As it drops downhill and rounds a curve, the spire of Salisbury Cathedral comes into view ahead. After another 250m, when the lane curves right, follow a Clarendon Way sign straight across a field (SU174299).

After rejoining the lane, carry on through a gate and, after another 800m, continue across 15th-century Milford Bridge. At a T-junction, carry straight on up a footpath. After crossing the railway, when the path forks, bear left. At the road, cross and carry on down Fowlers Hill. At the bottom, carry straight on along an alleyway and turn right at the end. Follow a subway under the bypass, and bear left to carry on along St Ann’s Street.

At the end, cross, go through a gateway into the Cathedral Close, and at the end turn right through an archway along the High Street. Turn second left along Bridge Street and carry on for 650m to the station.

Andrew Swift is the author of On Foot in Bath: Fifteen Walks Around a World Heritage City and co-author, with Kirsten Elliot, of Ghost Signs of Bath

Featured image: The medieval ruins of Clarendon Palace lie in one of the most unspoilt parts of Wiltshire, hidden deep in ancient woodland