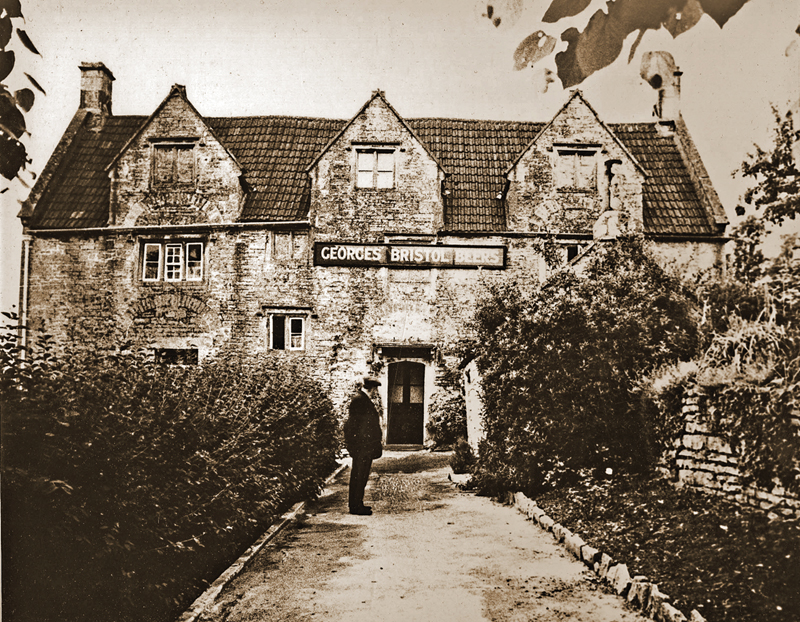 Walk, drink and be merry around the pubs of Bath

Avoiding wild country paths, muddy fields and dark forests this month, Andrew Swift wanders around the city investigating the pubs and taverns where the lights shine especially bright in the lead up to Christmas

Pubs come into their own during the festive season – busier than ever in the run-up to Christmas but somewhat quieter thereafter – and seeking out unfamiliar hostelries is an ideal way of discovering little-known corners of the city, or, by venturing slightly further afield, enjoying a brisk country walk.

Top of many people’s list of traditional pubs is likely to be The Old Green Tree in Green Street. It dates from around 1716, and its wood-panelled rooms were last fitted out in 1928 when it was taken over by The Lamb Brewery from Frome. Prior to that it was a free house and brewed its own beer in a yard at the back. Today it is once more a free house and much frequented by real-ale aficionados – although there are no plans to reopen the brewery.

The Old Green Tree’s unspoilt interior is very much a rarity in a world where pubs tend to get made over on a regular basis. Up on The Paragon, though, The Star, with its warren of tiny rooms and wooden partitions, still looks much as it did when it was refurbished in the mid-19th century. The Star, like The Old Green Tree, is no museum piece, however, but a pub that still works superbly well today, as its loyal band of regulars will confirm.

Down on Walcot Street is The Bell, first recorded in 1728, although, to judge by the blocked-up mullion windows at the back, somewhat older. Famed for its live music, range of real ales and ciders and bohemian vibe – with food courtesy of a pizza bike in the garden – it is owned by 536 of its customers, having become Bath’s first co-operatively owned pub in 2013.

The Raven on Queen Street is another free house noted for real ale, along with regular beer festivals and pie and mash dinners. Like The Old Green Tree, it has its own unique brand of beer, brewed especially by Blindmans Brewery in Leighton near Frome.

Over on Broad Street, Butcombe Brewery, which took over the Pig and Fiddle in 2015, has recently refurbished it, with beams, wood-panelling and rough stonework. In a nod to the 19th-century ghost signs that are so prominent a feature of Bath’s cityscape, a splendidly retro sign has also been painted on its previously featureless side wall.

One pub which has revived the tradition of brewing its own beer – which just about all pubs did in the 18th and 19th centuries – is The Royal Oak at Twerton. Long regarded as one of the top real-ale pubs in the area – as well as one of the top music pubs – the landlord, Chris Powell, upped his game in 2017 by opening a brewery. He called it Ralph’s Ruin, after his dog, who ‘likes to ruin stuff’. Although only small – with a two-barrel capacity – its brews have already gained a large and appreciative following.

Despite its current popularity, 20 years ago The Royal Oak stood shuttered and derelict, and in 2002 came within a whisker of being demolished. Fortunately, it was saved and since reopening in 2005 has become one of the most successful pubs in the city.

It is one of the lucky ones. In the past 25 years, Bath has lost around a quarter of its pubs. Once popular venues such as Ye Old Farmhouse, The Beehive, The Rummer, The Hat and Feather, The Castle in Bathwick and The Rose and Laurel at Odd Down have called last orders for the last time.

Another pub that, against all the odds, was brought back from the dead is The Grapes in Westgate Street. When it closed in 2017, it seemed inevitable that it would be converted to other uses. Fortunately, Ellie and John Leiper were not prepared to accept the inevitable and took on the monumental challenge of restoring one of Bath’s most historic buildings to its former glory. After reopening in August, brightened up beyond recognition, it has taken its rightful place as one of Bath’s top freehouses. An added bonus is that, for the first time in decades, Bathonians can see the grandest plasterwork ceiling in the city, dating from the 17th century, on the first floor.

Along the London Road are two more success stories. At the King William, Charlie and Amanda Digney’s revamp of a down-at-heel street-corner boozer managed the seemingly impossible – transforming it into a top gastropub while keeping it as a friendly local. Further out of town was a pub that seemed to have closed for good. Originally a Regency tavern called The Britannia, it was later renamed The Piccadilly and then The Hive, before lying abandoned and unloved, ripe for conversion.

At the eleventh hour, however, it was rescued by Michael and Emma Heap, whose herculean efforts to reverse years of dereliction have turned it into one of the most vibrant and successful community pubs in Bath. Now renamed Chapter One, it is proof that, with vision and determination, there is no such thing as an unviable pub. Some might bridle at Chapter One being described as traditional – but, if tradition is less about preserving the past in aspic than keeping the spirit of conviviality alive, than it justly deserves such an accolade.

Other pubs have had to be rescued not only from dereliction but also from those bent on converting them to something else. One of the most high-profile campaigns was staged by the villagers of South Stoke to save the 17th-century Packhorse after it was bought in 2012 by someone who wanted to convert it to a desirable country residence. Not only did they have to thwart the plans; they also had to raise enough money to persuade the owner to part with it. This took four long years, and it was a further two years – during which an extensive refurbishment was needed – before this iconic country pub could open its doors once again in March 2018.

The Packhorse lies on the edge of glorious countryside, so that a visit to this most traditional of pubs can be combined with a bracing winter’s walk. For shorter excursions, you could try The Pulteney Arms, handily sited between Henrietta Park and Sydney Gardens, or walk alongside the river to Widcombe, where there is a choice of three pubs – The Ram, The Ring o’Bells and The White Hart. Or for something more strenuous you could climb Beacon Hill to find the Richmond Arms, reopened a couple of months ago with community support after being closed for two years.

Bath’s pubs are a vital part of the city’s heritage, albeit one that is too often undervalued and overlooked. They are also a link with a time when communities had a greater coherence than they do today, and their survival is one of the best ways of ensuring that communities thrive in the future. The traditions they embody are well worth raising a glass to over the festive season, and remembering that their survival is dependent, above all, on our support.

Andrew Swift’s Country Walks from Bath is available from bookshops or direct from akemanpress.com