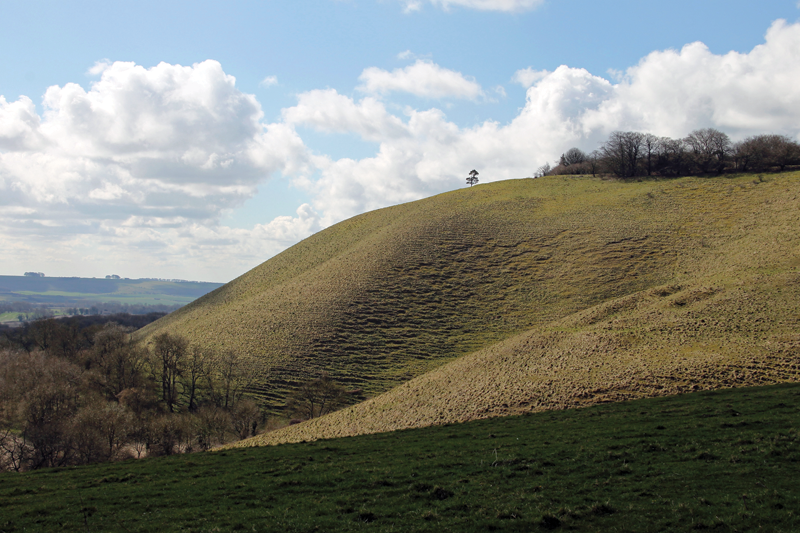 The Vale of Pewsey: A dark wooded inland promontory

It’s worth putting up with a bit of mud for views as magnificent as these, says Andrew Swift as he maps out a memorable walk above the Vale of Pewsey in Wiltshire…

Martinsell has long been many people’s favourite Wiltshire hill. In 1909, Edward Thomas described it as a ‘dark-wooded inland promontory’ and in 1936 HJ Massingham declared that ‘never did hill throw out so bold and soaring a bluff as Martinsell over the valley’.

It provides a suitably uplifting starting point for this month’s walk. After striding out along the escarpment, with the Vale of Pewsey far below, and remnants of prehistoric settlements all around, we drop down to the village of Oare.

From there, paths and lanes lead to Huish with its tiny church lost amid fields, in one of the most glorious settings imaginable. From Huish, an old road – now a rough track – climbs to a lonely crossroads high in the hills, from where tracks and byways lead past more prehistoric earthworks back to the starting point.

The views throughout are breathtaking, constantly changing, and, if you can put up with a bit of mud and a distinct lack of waymarks on the return leg, this is a walk that will live long in the memory.

To get to the starting point, head south from Marlborough along the A345. After two miles, turn left to follow a signpost for Wootton Rivers and Clench. After climbing gradually for 1.5 miles, pull into a small parking area on the right (SU183645), where Martinsell will suddenly be revealed in all its glory.

Go through the gate and carry straight on with a fence on your right. When the fence curves right, carry straight on uphill towards a copse. Bear left when the path forks, and at the top bear left alongside a fence to follow the edge of the escarpment.

As the path curves right past a lone pine (SU179638), the views open up southwards. Go through a handgate and carry on along the rampart of a hillfort. After a section through woodland, which may be muddy, the fence and the woods come to an end and the rampart curves right, but you carry on with a fence on your left in the same direction.

In the vale below you will see a large pond, while over to your right are the remains of an old barn abandoned in the mid-twentieth century.

As the ground starts dropping away, the view opens up to the folded downs over to the north-west, across which you will later be walking. As you carry on, look out for another earthwork on the other side of the fence on your left.

Follow the fence as it curves right, passing a metal gate. When you come to the next metal gate, cross a stile beside it and carry on, crossing the line of another earthwork (SU170633).

After another 300m, the path leads through an early settlement known as Giant’s Grave, before dropping steeply down to Oare. After crossing a stile at the bottom, bear diagonally left across a field. After going through a handgate, turn right along a bridleway (SU161628). If you look back, you will see that, from this angle, the hill you have just descended bears a striking resemblance to Silbury Hill.

The bridleway turns into a lane which leads to a main road. Cross and carry straight on along Rudge Lane, following the lane as it bears left, and after another 75m turn right along a bridleway. Go straight on through a stile by a gate, and carry on alongside a fence. Go through a gate at the end, cross a stile and carry on with the fence on your left. After negotiating a handgate and a stile, carry on alongside the fence until you reach the far right-hand corner of the field, by a wooden hut (SU147635).

Go through a handgate, continue down a path and turn left along a lane. Turn right at a junction and, after passing Huish church on your left, follow the track as it curves right and left through a farmyard and starts climbing past a row of beeches. This is archetypal chalk country, with the land scooped and folded on either hand. As you continue to climb, the hills close in, the path grows ever steeper and the woods thicken. Emerging into open country at the top, bear right at a crossroads (SU142645).

Go through a gate and walk through the ramparts of another earthwork. Do not follow the hollow path alongside the fence but bear slightly to the right, heading for a pair of windblown trees. As you approach them, you will see a fence ahead – carry on in the same direction, heading to the right of it.

As the view opens up to the south, you come to the gorse-grown remains of a prehistoric enclosure. After the path weaves through it, the way ahead is blocked by a fence. Bear right alongside it, and follow it when it curves left along the edge of the escarpment. If you are lucky, you will have chosen a day of high clouds creating an ever-changing patchwork of light and shade across the fields below.

After Oare comes into view and you start to descend, go through a gate and follow a faint track diagonally up to the left. Go through a handgate in the top corner of the field and head along a path with a pond on the left (SU156639). When you come to a drive, carry on along it and follow it as it bears right.

Do not turn off onto a footpath, but carry on along the drive, with views of the Ridgeway far to the north. After passing more earthworks you come to a main road (SU164643). Cross it and take a track bearing up to the right on the other side. Follow it as it curves left, and after 500m, just before it leads through a gateway, bear left along a bridleway to follow another rampart (SU169641).

At a crossroads with a signpost, carry straight on along a muddy bridleway to Clench Common. After going through a handgate, when the ramparts curve right, carry straight on, skirting the copse ahead and heading downhill to return to the starting point.

Level of challenge: muddy sections, a lack of waymarks on the return. There are sheep so dogs need to be kept under control.