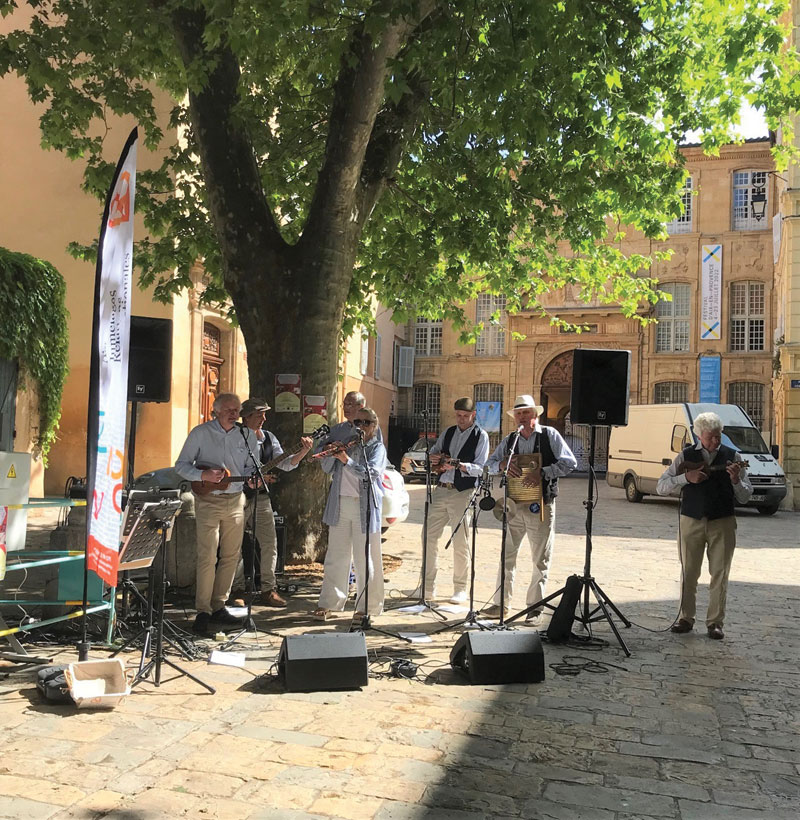 It’s not easy being the butt of the joke: just ask the ukulele. Small and (seemingly) simple, it’s an instrument that we’re more used to seeing propped up against the bookshelf of a flower-power teen or tucked into the backpack of a hostel-worn traveller than we are in a more formal context; a bit of fun to pass the time, but not something to be taken particularly seriously. Unless, as Andrew Ward – founder of Bath’s very own ukulele band, Uke Can’t Be Serious – found, that bit of fun becomes a bigger habit.

“I got given the ukulele as a joke; I was 60 and I’d never played anything”, Andrew tells me, explaining that he hadn’t intended to learn how to play. But it was love at first string-pluck, and after a few minutes of messing around with C chords and simple melodies, Andrew found himself in a committed (musical) relationship.

“It’s like any other instrument. You can play as many chords on a ukulele as you can a classical instrument; it has as many strings as a violin”, he says, in keen defence of the ukulele’s honour.

But playing solo can be a lonely pursuit, and soon after his 60th birthday Andrew began the search for fellow enthusiasts: approaching friends and family in the hopes that they might bite the band-shaped-bait. Bite they did; and in 2013, UCBS burst on to the Bath scene.

It’s a pretty social affair, Andrew says; he and his uke-crew – now including his son-in-law and, on occasion, several of his grandchildren – rehearse every Sunday. Made up of ukuleles of all shapes and sizes (piccolo, soprano, concert, baritone and bass), support instruments (a melodica and a washboard) and several singers, UCBS has settled on an eight-person core. For now, at least: if in the future the smaller members of the band decide they’re up for a more permanent position, a few extra spaces might just open up. Any readers hoping to get in on the fun, on the other hand, should prepare for disappointment. The band isn’t interested in expansion: “Absolutely not!”, Andrew responds when I ask if there’s any room for new members. “We’ve always been friends and family – it’s not a matter of ‘can I join your club?’. I’m afraid you can’t!”, the musician explains – eyes a-twinkle. Ukulele player wanna-be’s, it seems, must look further afield.

Andrew’s group is not only multi-generational – it’s also multi-genre. From Adele, to Johnny Cash, to Pink Floyd’s Brain Damage (yes, really) the repertoire is varied. So too is its taste in events: Uke Can’t be Serious make regular appearances at festivals, such as The Bath Festival and The Widcombe Art Trail, and farmers markets alike. Charitably minded, the band has also raised a total of £21,000 for worthy causes; a recent gig in Marshfield Church saw UCBS walk away with £1000 worth of donations in aid of Ukrainian refugees.

It’s not just Bathonians who have had the chance to move and groove to the UCBS set list. The band has recently returned from Bath’s twin town Aix-en-Provence, where it represented Bath in the French destination’s Twinning festival. The Aix adventure is the band’s second twinning trip: in 2019, UCBS performed at a similar event in Braunschweig, Germany.

The international relationships fostered by the Twinning Association, suggests Andrew, have taken on an a greater importance post-Brexit. “I think there should be much more of that grass roots level conversation across the nations”, the musician asserts, explaining that the UCBS trip to France revealed how “deeply hurt” the Aix community were by the UK’s decision to leave the European Union.

Bath, however, was never in favour of severing ties with the EU; the city voted to remain, and Andrew believes that it is through enterprises such as Twinning that we might remind our international neighbours that not everyone wanted out.

“I know it’s a silly little thing, fighting back with ukuleles and washboards – but it’s what it’s about, isn’t it?”, Andrew suggests. Perhaps it’s time that we started to take the ukulele a little more seriously.

You can watch UCBS in action on the band’s Youtube channel: youtube.com. If you’re interested in having UCBS play at at an event, email andrew@wardandrew.com or call 07809 761538