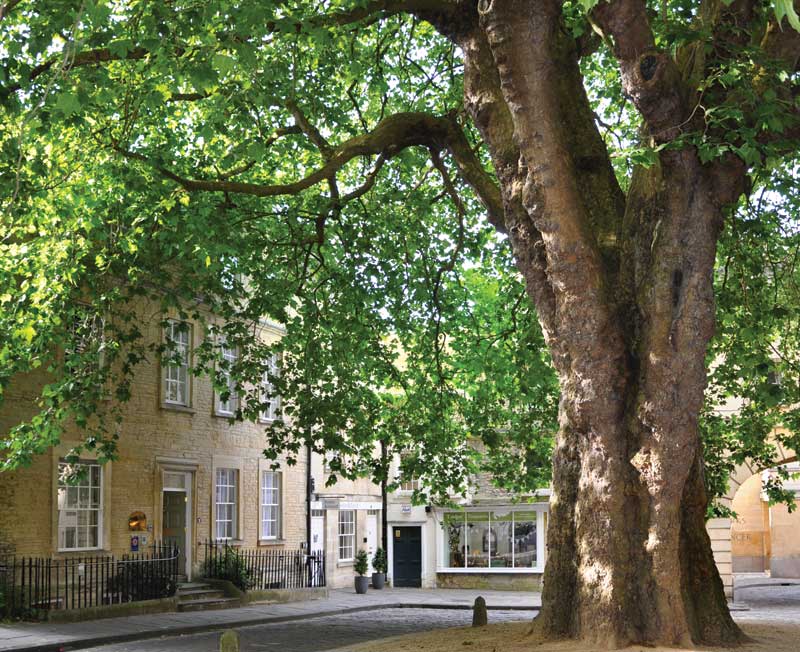 Bath is best known for its architecture, but what of the city’s collection of trees? Georgette McCready discovers some prized highlights with the help of arboriculturist Denise Hart

­­We may think of Bath as a place to admire for its architecture, but there’s another impressive feature to appreciate that’s every bit as historic and beautiful, and that’s the city’s collection of rare and prized trees.

Every day we see visitors photographing the buildings of the Royal Crescent, but how many of them will notice a stand of graceful old beech trees beside the bandstand in the park below the crescent, which marks the exact centre of the curve of the Georgian terrace? These trees, like many others in Royal Victoria Park, date back some 160 years to the original planting scheme for this publicly owned park. The beech trees are currently surrounding by a low rope fence and the grass allowed to grow long beneath them, studded prettily with meadow flowers. The roping off has been done because these trees are nearing the end of their natural life expectancy so protecting their roots from footfall and mowing may prolong their healthy existence. 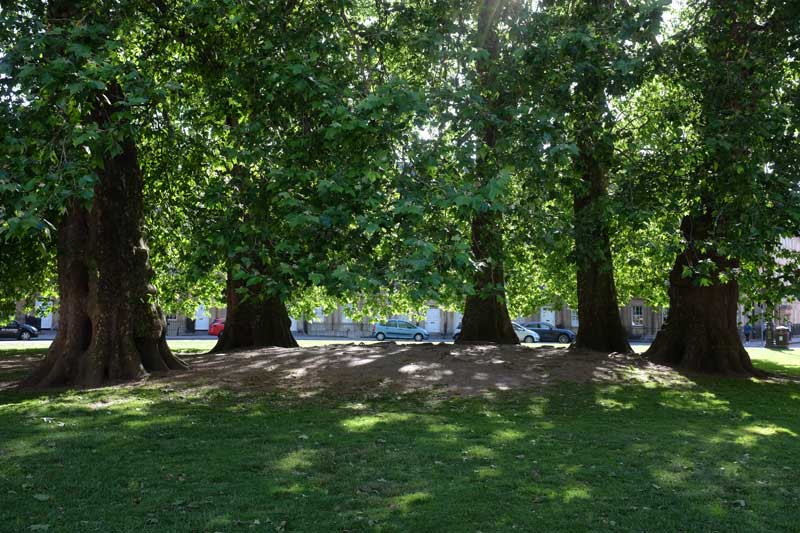 The circle of trees in the Circus. Photography by Matthew Sterling

Arboriculturist Denise Hart is the tree manager for Bath and North East Somerset Council. She and her team run a 24-hour response call-out as part of their care of the council’s 35,000 trees and areas of woodland, along with caring for outstanding sites on the much-admired Bath city skyline, such as Rainbow Woods and Charlcombe Vale woods. Denise has many years experience working with the city’s trees and is a fascinating guide to accompany on a walk through Royal Victoria Park, which is home to more than 2,000 trees. We stop to admire a rare pair of male and female gingko biloba trees (popularly known as maidenhair trees), which can be seen as you turn left at the top of Marlborough Lane. These beautiful mature trees originate from Asia and have delicate fan-shaped leaves. They are a pre-historic plant, one of the oldest tree species, and respected in Japan where they were the nearest living thing to survive the atomic bomb on Hiroshima and have been given the respectful title, the Tree of Peace. The fruit from the female tree is edible, but Denise warns me it smells unappetisingly like rancid cheese.

The Great Dell in the park is a wonderful shady arboretum to explore. Under the stern gaze of the giant stone head of the Roman god Jupiter, visitors can wander freely among the trees. The newly restored wooden walkway is particularly popular with children, while adults find the experience of being among these natural giants very calming. As Denise says: “Being among trees is very good for lowering the blood pressure.” So, it’s a peaceful and largely uncrowded place to lose yourself, but it’s also a site of pilgrimage for tree enthusiasts as it has a collection of what are called Champion Trees. These are recorded on the national Tree Register database, which singles out particularly fine specimens of note. In the Great Dell, for example, there is a Mediterranean looking Umbrella Pine, a large Smooth Arizona Cyprus and a Japanese Torreya with delicate, fern-like yellow-green leaves, all of them Champion Trees.

Denise’s work is largely taken up with careful observation and conservation of the city’s tree stock. She says the Highways team at Bath and North East Somerset Council work alongside her team to keep a watchful eye on trees and look after them. “This is especially important in sites such as Pulteney Road, “ she says. “Where the mature plane trees play a vital role in helping keep down pollution.” She also cites the London plane trees in Abbey Green and Kingsmead Squares as examples of where historic trees enhance our city environment and bring pleasure to residents and visitors. Denise is clearly fond of her charges, referring to them affectionately as ‘he’ and speaking with sadness about trees that have had to be felled due to extreme old age, and their likelihood of them toppling by themselves. But next to the stump of an old weeping lime in the Botanical Gardens she has planted a new weeping lime, which is dedicated to the campaigning of the Bath Suffragettes.

A few decades ago a tree disease known as Dutch elm disease was accidentally introduced to the UK, causing devastation in the countryside, killing thousands of native elm trees. But arboriculturists such as Denise Hart, are already creating solutions for future generations of people and trees. Denise has planted two young elm trees, from a new breed, which are immune to Dutch elm disease and you can find one of these specimens in the Botanical Gardens. 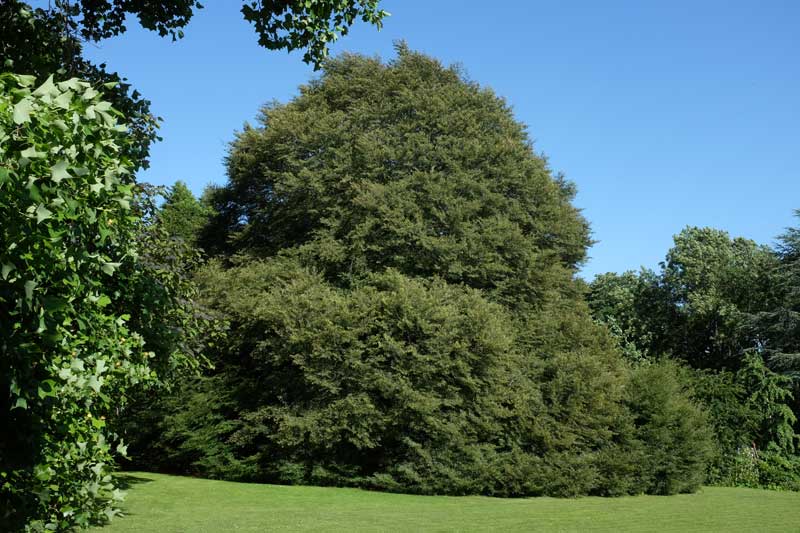 It pays to be observant and to keep looking up as you stroll round the Botanical Gardens. Standing majestically at the top of a sweeping lawn is a tall tulip tree, which at the time of writing was in bloom, its orangey-green flowers like the cupped shape of a tulip. Outside the Temple of Minerva there’s a tree with distinctive berry-red flowers – that’s a pomegranate tree. Elsewhere you can find rare examples of a Tree of Heaven, a magnolia tree which produces fruit which look like cucumbers, and a cut-leaf beech whose luxuriant branches layer themselves gracefully like a crinoline, all the way to the ground. Many of the trees have labels on their trunks so we can learn their Latin names and discover whether they are Champion Trees.

Perhaps Bath’s most photographed trees are the impressive London plane trees that stand in the centre of the Circus, their enormous canopies spreading out towards the houses that surround them. John Wood’s original design for the Circus did not include the trees, which were planted in the 1820s, but they seem an intrinsic part of this scene. We think we know this site so well, but how many of us have noticed how many trees stand on this spot? The answer is five, although their position indicates that there used to be several more.

As to Bath’s oldest tree? This is probably the ancient yew tree in the grounds of Bath’s oldest church, St Mary’s at Charlcombe. This was written about in Collinson’s History of Somerset when, in 1791, he described it as “a fine yew tree.” It doesn’t come under Denise’s jurisdiction as it grows on church-owned land.

To learn more about Bath’s historic trees there are two trail map leaflets available from Bath Royal Literary and Scientific Institution, Queen Square, for 50p each. The Queen Square Tree Trail explores the history of the square and looks at some of the exotic trees to be found, including the weeping ash, in which what look like faces can be seen on its bark, and the foul-smelling Tree of Heaven. The other leaflet is the Tree Gazing Trail, which includes a map of the Great Dell and Botanical Gardens in Royal Victoria Park and makes a great trail, full of interesting titbits, for families to follow. Bath and North East Somerset Council’s parks department is also currently selling plants from its nursery in Royal Victoria Park.