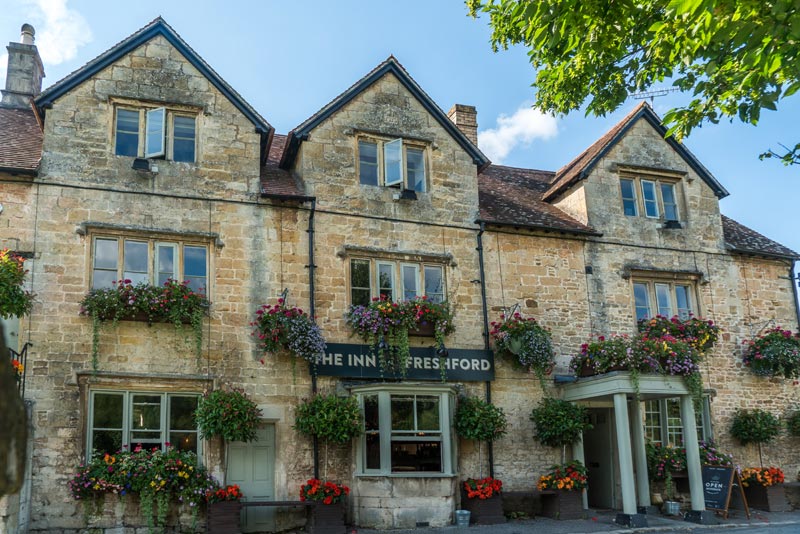 Have gastro-eateries and gin bars taken over from our traditional pubs? Melissa Blease finds that traditional public houses are still valued by the community, and are keeping their fires burning brightly and local ales on tap

The Great British Pub is as much of a British Tradition as eating fish and chips, complaining about the weather and… well, “going down the pub”. In recent years, however, it started to look as though time had been called on one of our favourite pastimes; in 2014, UK pubs were closing down at a rate of 29 per week. But despite multiple challenges, ranging from the rising cost of living in a harsh economic climate to cut-price supermarket alcohol deals, the popularity of niche pub alternatives including dedicated gin bars and the promotion of public health such as Dry January lines, the pub refused to die.

At the time of writing, only 616 pubs have closed in the past year. While the closure of two pubs a day is still a sorry state of affairs, a number of initiatives launched by the Campaign for Real Ale (CAMRA) with government policy support are going a long way towards ensuring the stability of our much-loved public houses. Meanwhile, increasing numbers of forward-thinking entrepreneurs have taken matters into their own hands. 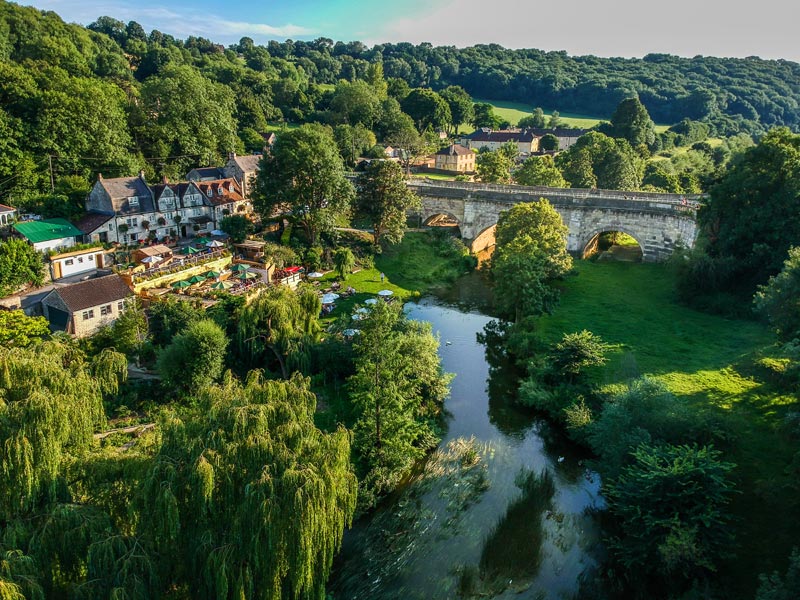 The Cross Guns in Avoncliff, situated on the Two Valleys Walk route, has an idyllic position and is not short of historic charm

In July 2013, 518 locals, customers, employees and fans of the legendary Bell Inn on Walcot Street bought the pub under IPS Co-operative rules. Five years later, another historic Bath pub institution is celebrating an independent, co-operatively owned success story of its own. After many years of campaigning and months of project toil, the Packhorse Inn in Southstoke reopened its ­­doors in March this year (on the 400th anniversary of its inauguration as an ale house), marking the completion of a long, hard fight, backed by over 400 visionary community shareholders involved in the largest ever “pub buy-back” in the UK.

Elsewhere, several of the ancient, historic inns and hostelries that offer so much rich texture, character and energy to our villages, towns and cities are being offered the TLC they so richly deserve, courtesy of innovative new owners who have taken inspiration from time-honoured traditions in order to reaffirm a bright new lease of life.

“The British pub tradition is still very much alive, but it’s up to the owners to maintain that vibe for the customers.”

In 2016/17, the small but perfectly formed Ideal Trade Company took over three of the most beautiful pubs in the Bath locale: the 16th-century Inn at Freshford, the Cross Guns in Avoncliff (also boasting 16th- century origins, nestled on the canal towpath and featuring panoramic views from the riverside pub gardens) and the Old Crown Inn on the Bath-Bristol road that passes through the picturesque little village of Kelston.

“We’re really proud of all three of our pubs,” says says Rozi Hempstead, Ideal Trade Company director. “We chose them because of their uniqueness, their historic charm and their gorgeous locations: each one is set in an idyllic position with stunning surroundings that encourage people to get out and about in the glorious countryside, too – visitors have been known to get to the Cross Guns, for example, by many forms of transport including bike, boat, kayak, paddle board and even horse, and both the Cross Guns and the Inn at F­­reshford are on the Two Valleys Walk route.

“We’ve kept the traditional ambience and beautiful original features such as wooden beams, flagstones and log fires throughout all three pubs, which we’ve complemented with antique curiosities and furniture while still adding a contemporary flavour.”

The pubs are far removed, however, from being tourist destinations. “Although each pub attracts visitors from far and wide, they all enjoy long-standing support from our many locals and regulars, who we actively support in return,” says Rozi. 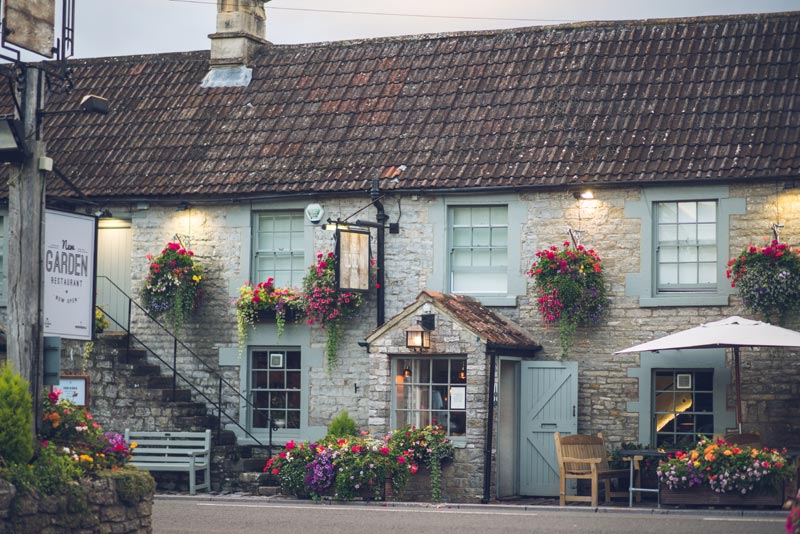 “We change our menus regularly and host monthly events such as Burger and Malbec evenings or curry nights alongside weekly drinks offers such as half price wine or prosecco – and, of course we serve full-on roasts every Sunday. We manage a packed calendar of events throughout the year including beer festivals and our Al Fresco Dining Clubs in the pub gardens, and feasts hosted by our sister company Barabiku Outdoors Catering that put seasonal menus cooked outdoors using a variety of open fire cooking methods in the spotlight.”

There is a strong emphasis on local ingredients. Rozi continues, “We’re passionate about food and drink and have traditional values. We source the best ingredients from local suppliers wherever possible – we’re big fans, for example, of Bath Soft Cheese, we have our own smokehouse and our menu reflects the increased recent demand for vegan and vegetarian food.” It seems that the new-look pub does need to be about far, far more than just a decent bar, a sturdy bar stool and a packet of pork scratchings in order to keep up with modern tastes.

“The British pub tradition is still very much alive and going strong, but it’s up to the owners to maintain that vibe for the customers,” says Emily Brew (yes, really!) who, alongside her husband Dan, took over the Curfew on Cleveland Place, Bath in the summer of 2016. “Pubs are the original social networking site and it’s important to keep this value in place.” Following a major refurbishment, Dan and Emily’s popular, 200-year old hostelry is now a vibrant, buzzing merrymaking zone that blends heritage with present-day sensibilities to remarkable effect. “We all know how easy it is to speak to someone through a screen, but there’s nothing better than seeing your friends face to face and catching up over a pint (or three).

“Our Wadworth Brewery selection is brewed just 20 miles away in Devizes and all our food is freshly cooked on site for menus that change with the seasons. As a small independent business, we know how important it is to support others in the same position so we’re big advocates of local sourcing with all our meat and vegetables coming from local butchers and greengrocers, and our loyal regulars are rewarded with events to thank them for supporting us.”

A short (pub) crawl along London Road takes us to another vibrant, independent pub hotspot that pulls a perfect pint to a similar beat. Chapter One – formerly known as the Hanover Hotel, the Britannia Inn, the Piccadilly Ale House and The Hive – was built in the early 1800s and, from the outside, looks like a run-of-the-mill local neighbourhood pub. Inside, Australian-born Emma Heap and her Canadian-born husband Michael have mixed things up a bit in order to offer broad appeal to the demands of the contemporary pub-goer. “Victorian pubs were often modelled on the parlours of grand homes – a kind of nod to the aspirations of their customers. We set out to take that tradition into the 21st century, creating a space that people feel is an extension of their own front room. We’re passionate about the concept of a ‘Third Space’ – a public space that is neither home nor work, where you can meet up with friends, feel safe to hang out by yourself, bring family, play games, read books, try something new or just come in to have a chat; a space where you feel comfortable to just ‘be’,” says Emma. 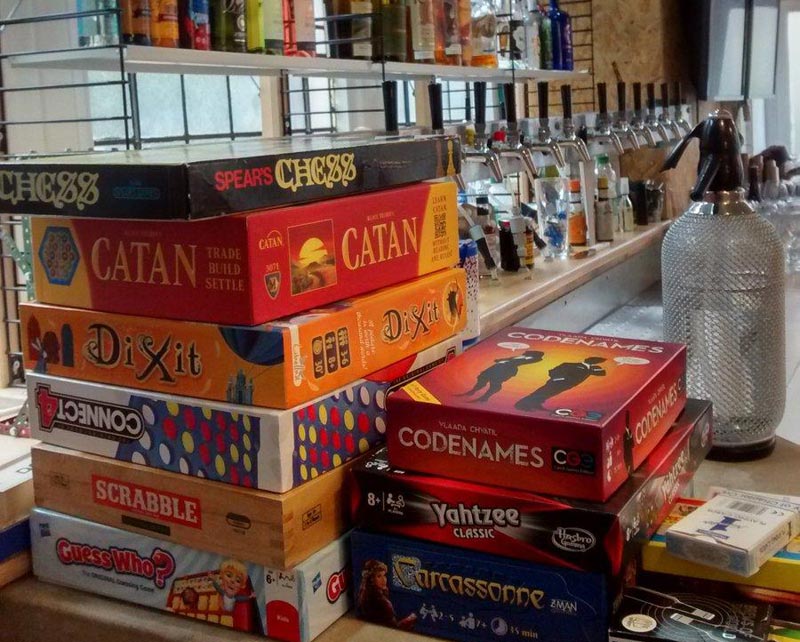 Chapter One on the London Road is modelled on the idea of a ‘Third Space’, somewhere to relax that isn’t home and isn’t work

Upholding the same ethos outlined by Rozi, Emily and Dan in their pubs, Emma and Michael eschew patronising multinational drinks companies in favour of supporting local producers on their carefully-curated drinks menu. “Why drink a factory-produced lager from a company that spends more on their marketing budget than they do on the ingredients when you could be drinking a beer made by a small team of really passionate people who have scoured the earth for the best ingredients and spend huge amounts of time and energy getting that recipe perfect?” says Emma.

As for food… “We have a lovely selection of crisps, nuts and scratchings available if you get the munchies, but we encourage our customers to order their favourite local takeaway and eat that in the pub if they get properly hungry – that way, people can eat what they feel like instead of having us tell them what we think they should eat!”

“Exceeding expectations and delivering the best guest experience is crucial to the success of the modern pub and we ensure this ethos is delivered across all three of our sites,” says Rozi. “Quite simply, we want people to come to us to relax and enjoy what we offer. The challenge, however, is to be consistently consistent, maintain customer service and to adapt and deliver what the customer wants.”

And if what the customer wants is an escape route from the challenging times we’re living in, the new-look Great British Pub doors are open for business.­­­

Featured image: The Inn at Freshford combines traditional charm with a contemporary vibe