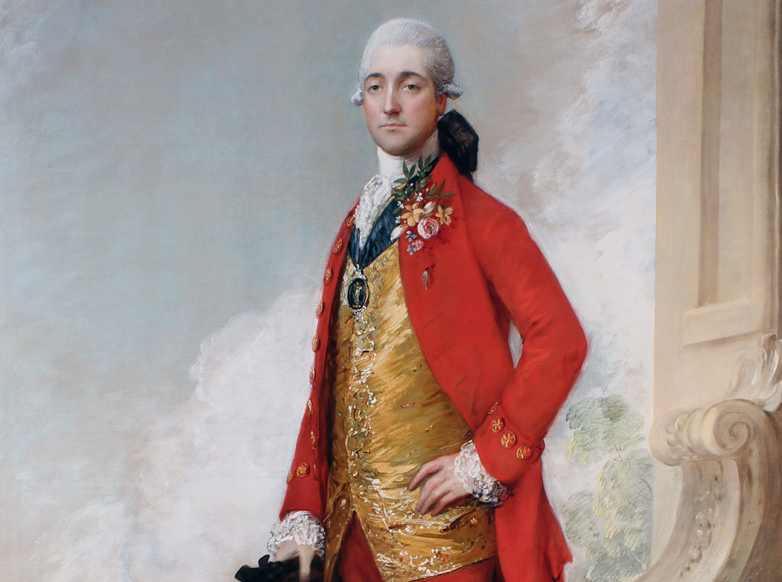 The art world was set a-flutter at the revelation recently that a collection of landscape sketches thought to be by Edwin Landseer and held in the royal collection at Windsor Castle, are in fact by Thomas Gainsborough (1727 – 1788). The discovery was made by art historian Lindsay Stainton and supported by eminent art historian James Hamilton, who has just written a major new biography of Gainsborough.

James Hamilton has spent more than five years researching and writing about the life and times of the artist, who was born in relatively lowly circumstances in Suffolk and rose to become 18th century society’s favourite portrait painter, numbering the royal family of George III among his subjects.

I spoke to James Hamilton on the morning he had received his first published copy of his book Gainsborough: A Portrait and was able to ask him about the 16 years Gainsborough spent in Bath, where he built his reputation among the society crowd, painting the portraits of doctors, politicians, landowners, performers and their wives and daughters.

James said of the Windsor Castle findings: “The discovery of these sketches is very exciting indeed. I was particularly delighted to see a sketch on the back of one of them of a young woman, almost certainly Margaret Burr, who went on to become his wife.”

Margaret was a loving but tough wife to her husband and keen for him to make enough to support the family. James said: “Gainsborough was relatively unknown when he arrived in Bath but he was quick to publicise his work. Artists were allowed to show their work in the Pump Room, so they’d see how beautiful he’d made someone look – he had a great talent for making ugly people beautiful.”

Gainsborough and his wife Margaret rented a new townhouse in Abbey Street (since demolished) on their arrival in 1758. He wanted to welcome his sitters to the sort of grand houses that they lived in, so the family filled the rest of the property with lodgers to meet the rent. Thomas Gainsborough’s sister Mary Gibbon set up a millinery shop next door and while customers were choosing fabrics or trimmings, they were encouraged to view the latest portraits set up in an adjoining gallery.

“They were canny business people,” says James, “but then at this time in the 18th century the descent from wealth to poverty could overcome families very quickly, so they needed to be.” And Gainsborough had many rivals, not least renowned Bath portrait painter William Hoare.

One of Gainsborough’s first subjects in Bath was an attractive young musician, Ann Ford, who had many admirers. His full length romantic portrait of her in a frothy lacy dress, her forthright gaze off to one side, elbow casually on a plinth, her legs crossed in what was then a very male stance, oozed confidence in both subject and sitter. She, like many of Gainsborough’s subjects, looks relaxed, and that, says James, is almost certainly because Gainsborough had charm and was very good at putting people at their ease. He soon put his price up from five guineas a portrait to eight.

As the Gainsborough studio thrived, the family – he had two daughters known affectionately as Molly and Peggy, who he painted regularly – moved up to Lansdown and eventually to No 17 The Circus. This was a very fashionable address, with the Duke of Bedford as one of their near neighbours.

James came to Bath in his subject’s footsteps: “I simply rang the bell at No 17 and the owners very kindly let me in. Of course it’s now equipped for 21st century living but it’s very beautiful with its high ceilings. I visited the first floor room at the back of the house where he would have received his sitters, it’s north facing with a very pleasant aspect. Gainsborough would have had a much longer window, letting in as much natural light as possible. It is possible that he also used the window to lower out some of his larger paintings.” There is a metal plaque over the door which marks his residency.

“I then went round to the mews behind The Circus,” added James, “where I happened to find the owner of the mews building about to get in his car. He kindly agreed to show me the 18th century one-storey building that the Gainsboroughs would have used to keep their carriage and horses.” James was most excited to be shown into an end room, a small space with the original flagstone floor and original fireplace. “It was marvellous, untouched by the centuries, yet neat as a pin. I think Gainsborough’s groom or stable boy would have lived in here.”

Over the years of researching Gainsborough’s life, through letters, records and historic archives, James Hamilton grew very fond of the man. “Oh, he was marvellous, great company. I think when you write about someone you feel as though you know them.”

He was also an eccentric, outspoken and capable of temper tantrums – he once slashed a painting. And although he was a devoted husband and father he used prostitutes and his language, written and spoken, could be foul. Friends destroyed many letters because of their saucy content. The Byam Family by Thomas Gainsborough, can be seen at the Holburne Museum, where it is on long-term loan from the Andrew Brownsword Arts Foundation

We are very fortunate in Bath to be able to enjoy Thomas Gainsborough’s work at close hand. At the Assembly Rooms hangs the dashing Captain William Wade, Master of Ceremonies. The artist gave the picture to the Assembly Rooms, although he insisted on being paid for the frame, as he knew it would be more publicity for his work. The Assembly Rooms were under construction during Gainsborough’s time in Bath and during one visit he narrowly missed being killed when part of a newly hung chandelier crashed down from the ceiling.

The publicly owned Victoria Art Gallery has two Gainsboroughs, a portrait of Sir Thomas Rumbold with his son George, and a landscape. Along Great Pulteney Street at the Holburne Museum there are seven works by Gainsborough, including the enormous, eight foot by eight foot, The Byam Family.

This portrait, showing a couple and their daughter, has a fascinating story behind it. George Byam and his wife Louisa wanted a portrait of the pair of them that would show their wealth. They planned to hang the picture, with its English landscape background, in their Surrey home. So the painter set to work on this giant piece, putting George in a blue waistcoat, his wife in a pink dress. But the Byams later demanded changes and Gainsborough was forced to re-work the picture, adding their daughter Selina, by now two or three years old. George’s waistcoat was to be red and gold, Louisa’s dress blue.

The Gainsborough family left Bath for London in 1774, but during his time in the west country he painted more than 300 portraits. Gainsborough died aged 61 in London in 1788, probably of cancer of the throat or jaw.

The Victoria Art Gallery is hosting an exhibition in the new year which includes a portrait of Gainsborough’s son in law. It’s considered among his best works and was last on display at the Bath gallery in 1918. The painting been in the Royal Collection since it was given to George IV as a present by one of his brothers. Look out for more Gainsborough shows next year, including one of his family at the National Portrait Gallery.

Gainsborough: A Portrait by James Hamilton is out now, price £25. The author will be talking about the artist’s life at an evening hosted by Topping & Co on Monday 25 September. The book will be read on BBC Radio 4 at 9.45am from Monday 7 to Friday 11 August.