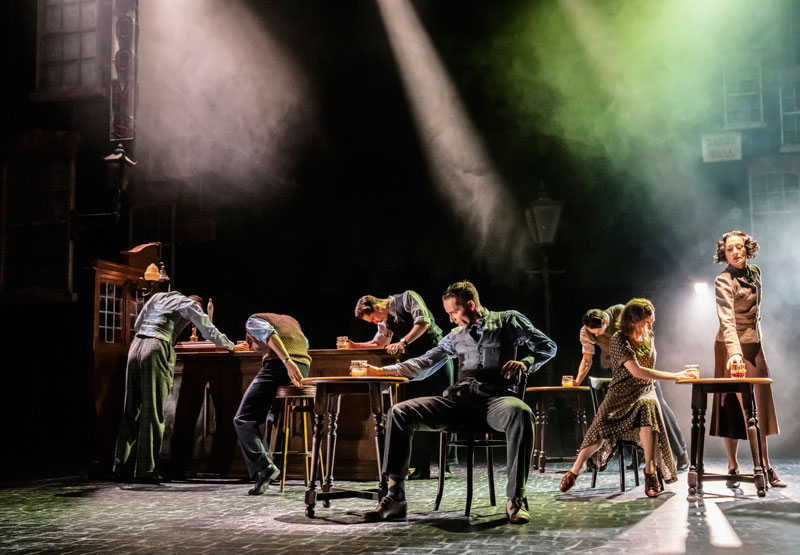 Theatre without words: an interview with Sir Matthew Bourne

British choreographer Sir Matthew Bourne has been creating and directing dance for musicals, theatre and film as well as his own award-winning companies for 30 years. Melissa Blease uncovers the man behind the magic.

A richly textured, super-sensual zone where creativity, imagination, love, humanity, wit and beauty are all celebrated, all the time: that’s the world that choreographer and director Sir Matthew Bourne has created for all who enter his orbit. And yet

“When people talk about Matthew Bourne in that way, it’s my shows that they like, not me personally, or me as a personality,” he says. “And that’s what’s lovely, to me; what I do is definitely not all about me.”
But Matthew – without you, there’d be nothing like that to say about what you do, would there? And we’ve been offered the opportunity to say a lot about you for a very long time.

Established in 1987, Matthew Bourne’s New Adventures is a ground-breaking, multiple award-winning British dance-theatre company, renowned for telling stories with a unique theatrical twist. This month, the world première tour of New Adventures’ latest production The Midnight Bell visits the Theatre Royal Bath – and we are, of course, poised to discuss those ‘intoxicated tales from darkest Soho’ in full here. But before all that… can we focus on the man behind the magic?

“I’ve been doing this for a long time now,” he says (still slightly, I’m feeling, keen to take the spotlight off himself and onto his company). “I suppose our original Swan Lake [a dark but shimmeringly beautiful contortion of Tchaikovsky’s classic ballet, featuring a repressed, depressed prince deprived of love by his mother and an overtly macho, all-male cast of swans, which premiered in 1995] is always going to be a highlight of the past three decades. It took dance to places dance wouldn’t normally go, and took us abroad for the first time and into the West End. It was such an unusual, unexpected thing to have happened; we were – and still are – quite a small company, and Swan Lake was originally just another small project. But it ended up creating a loyal audience for dance on a much bigger level, and perhaps encouraged other companies to think outside the box a little bit bit more too? It was a life-changing experience for everybody involved in it, and for dance in general, not just me.”

No no, Matthew: for now, this really is all about you; there’s no wriggling out of the fact, for example, that in 2016, you were knighted in the Queen’s New Year Honours in recognition of Outstanding Services to the Art of Ballet.

“Okay, I can’t be overly modest about that!” he says; “That was great, I loved it, it was just fantastic. It hasn’t made a real change to my life in a literal way, but it offered me a wonderful opportunity to be more of a spokesperson for my profession, and that’s where recognition like that becomes important; you become a figurehead, in some ways, and dance needs figureheads, because there aren’t that many of them. And so, I’ve taken that responsibility seriously. But on a personal note, I grew up loving that honours list, waiting to see who’d got the CBEs, the OBEs; it felt so fabulous, and glamorous, and very special. Now, having been there and shared that experience with a lot of people, I support the honours list even more. The names we mostly hear about are the famous ones, or the ones you feel may not deserve it – politicians, and all that. But the vast majority of the people on that list are special people, doing amazing work in their communities, and being recognised for it; it’s like our country saying thank you to them. And it’s such a wonderful day out!”

Wordless theatre is basic storytelling, really; we can all connect with it, we all understand wordless language whether we know it or not

So… I got Sir Matthew to talk about himself for a moment. But in the next scene, we got our dancing feet back on the ground again to talk about The Midnight Bell.

“Before we start on that, you have to know that I don’t even believe in publishing scene scenarios in programmes,” he warns. “You don’t need to have a whole show explained to you before you watch it; that’s just crazy. That’s what I set out not to do, with dance; I actively don’t want the audience to know too much before the lights even go down.” So, here we go… sans spoilers.

“The Midnight Bell is specifically designed for mid-scale venues so we can visit places that we can’t visit with our big shows without compromising the production or the experience in any way at all,” he says. “Big theatres aren’t right for this production, which is largely about intimacy; you need to be close to the action and to be able to see the faces of the amazing actor/dancers that I work with, so the Theatre Royal Bath is going to be perfect for us.”

Are we allowed any back story at all? “Well, it’s based on the novels of Patrick Hamilton who most people think they don’t know, but two of his plays – Rope, and Gaslight – were made into quite famous films; Hamilton originally coined the phrase ‘gaslighting’. But his lesser-known novels are wonderful. They were very much about the lives of real, working-class people in the late 1920s, the 1930s, the 1940s, in pubs – as a major alcoholic, Hamilton knew pub life all too well; he was never part of literary circles, and spent a lot of time drinking with ordinary people. He captured the authentic voices of those people and captured a whole world, full of people who are simply trying to connect with other people. One of the reasons that people first went to pubs was to just get out of the boarding houses they lived in, or their cheap hotels, or their digs. And that thing about lonely people coming together, wanting to be around other people, and the connections that form in that situation – that’s what our stories in The Midnight Bell are all about: the relationships within a group of people who are all connected by going to the same pub.”

Given that context, is it likely that we’ll connect more easily than ever before with The Midnight Bell in the post-lockdown world? “I didn’t mind lockdown too much,” says Matthew. “When the pandemic started, we’d been touring non-stop for quite a long time so it was good, on a personal level, to break that pattern, be at home a bit more and have some time to do things that you wouldn’t normally find time to do. But I was acutely aware that not everybody’s situation was as good as mine – where I live is a nice place to be, but if you were in a single room somewhere, it was terrible. And my company are basically all freelancers, so lockdown certainly wasn’t great for them; I was more concerned for them than I was for me. I was actually quite pleased to have a rest, even though I don’t do new pieces very regularly – maybe every two or three years, sometimes longer. I need a lot of time with a piece, and I need to keep working on it once it’s in front of an audience – that’s the beginning of a second journey for me, and it happens quite slowly.”

So, regardless of the impact of lockdown, The Midnight Bell has, it seems, been waiting to ring for quite a while. “It’s a very devised piece – there’s no beginning/middle/end,” Matthew explains, still carefully choreographing his way around spoilers. “My big fear was that it’d be difficult to follow, with too many characters and too many stories going on. But when we first did it, nobody had a problem with that at all, it was quite clear. That’s a great relief to me, because I always want to be as clear as possible in a wordless media. But wordless theatre is basic storytelling, really; we can all connect with it, we all understand wordless language whether we know it or not. And you certainly don’t have to ‘understand’ dance – whatever that means! – to get drawn in to The Midnight Bell; just come along, you don’t need any prior knowledge.”

So there we have it: The Midnight Bell, no spoilers… and so, we shimmy back to Bourne-centric world again, for a bit of end-of-chat fun: who is Matthew Bourne, in three words? “Oh goodness! Well, I’d say questioning; I always, always question everything. And lazy! Everyone thinks I’m a workaholic, so that’s a funny juxtaposition, isn’t it? But I’m not very prolific with the amount of new pieces I put out there. Maybe that’s linked to my next word: I’m cautious, in some ways, but I’d like to think I’m a good collaborator. Oh, this is so hard, talking about myself!”

But oh, Sir Matthew Bourne: your magical world of wordless media speaks volumes on your behalf.