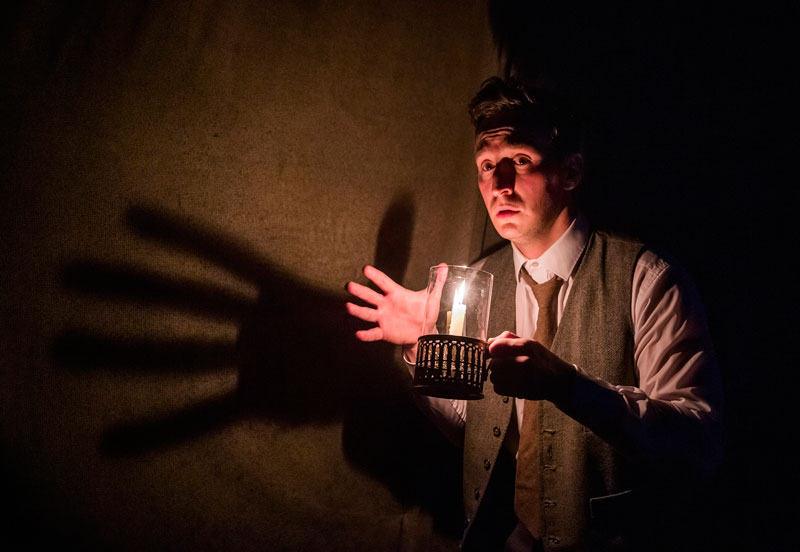 Theatre Review:
The Woman in Black

It may not have much in the way of big-budget special effects or cinematic editing trickery to boast about, but Stephen Mallatratt’s stage adaptation of Susan Hill’s best-selling novel The Woman in Black – the second longest-running stage show in the West End, billed as “the most terrifying live theatre experience in the world” – is without a doubt one of the most chillingly atmospheric live theatre experience that fear fans could ever wish for.

Susan Hill’s original story focuses on young solicitor Arthur Kipps, who is dispatched to the small market town of Crythin Gifford to attend the funeral of mysterious, reclusive widow Alice Drablow, formerly the sole resident of Eel Marsh House, a gothic mansion across a causeway which is cut off from the mainland at high tide. After the funeral, Kipps is to remain in Crythin Gifford to attend to Mrs Drablow’s estate. To save all that to-ing and fro-ing across the causeway he decides to spend a couple of days – and nights – alone in said gothic mansion to sort out the paperwork. What could go wrong? Quite a lot, as it turns out – and even those who have seen film director James Watkins’ 2012 big screen version of the story ain’t seen nothing of the dark, sinister tale that ensues until they’ve experienced the live theatre production.

In the stage version, an older Kipps calls on the assistance of a young actor to help him recount the tale of his horrific, life-changing experiences at Eel Marsh House many years before. In this memorably evocative production, the roles of Kipps and The Actor are artfully swapped and shared between Robert Goodale and Antony Eden, with Goodale doing a splendid job of frequent multi-tasking between characters. While the action takes a while to get going (some may find the stop/start play-within-a-play set-up is dragged out a little too long initially), our patience is richly rewarded; I’m guessing that the arm rests on the seats in the Theatre Royal are rarely subjected to such intense gripping as the plot gathers pace, while current social distancing rules reinforce the sense of isolation.

Sets are stark and simple and even props are kept to a bare minimum, leaving the two cast members, clever direction and a fast-paced script to deliver maximum impact at crucial moments as lighthearted opening scenes swiftly give way to a far more sinister vibe. Not long into the performance, audience energy levels vibrate with the kind of tension, dread and anticipation that turn even a random rustle of a Malteser wrapper into a suspicious portent of impending terror while any occasional movements in the shadows, either real or imagined, set the pit-of-the-stomach cycle to ‘churn.’

This is a properly spooky, traditional ghost story presented to its very best advantage, packed with the kind of suspense, tragedy and subtle drama that creeps under the skin and lingers for a long while after the curtain comes down. But should there be a third actor listed on the programme cast list or not? Like the residents of Crythin Gifford, we’ll talk no more about sightings of The Woman in Black here…