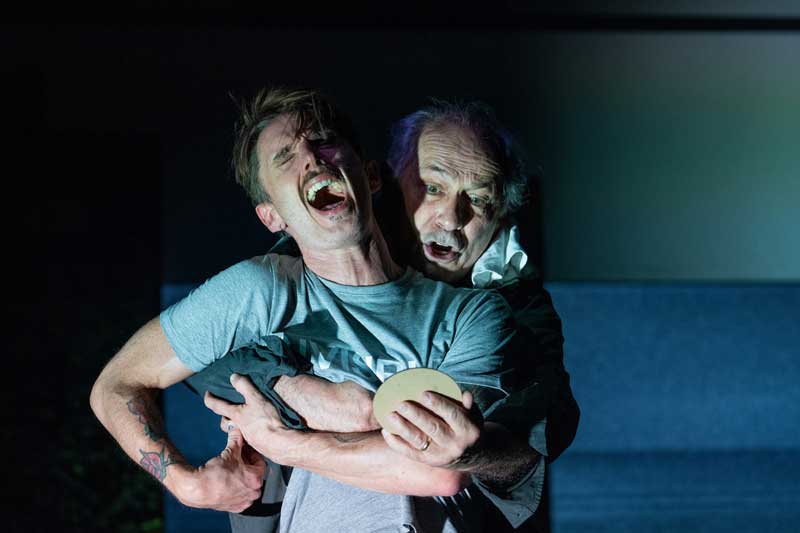 There have been an immersive range of performances and adaptations of The Tempest, Shakespeare’s complex, multi-themed play, over four centuries. It started with a performance before James I and the English royal court in 1611, and has run through English Restoration adaptations, Romantic Era productions, David Garrick’s 18th-century opera, Victorian interpretations with lavish sets and visual spectacle, John Gielgud’s first Prospero in 1930, Peter Brook’s mimed production in 1968, Yukio Ninagawa’s 1992 Noh drama version and Vanessa Redgrave’s androgenous 2000 performance of Prospero at the Globe – and these are just a handful of the ‘tempestuous’ highlights, also including orchestral works, ballets and musicals.

Now at the Ustinov Studio in Bath in the capable hands of new Artistic Director Deborah Warner, The Tempest’s creative reinvention continues. The launch of Warner’s programme at the Ustinov quite literally starts with a bang. I’m thinking specifically of Caliban’s explosive entrance in Scene 2, when he pushes the monumental flat grey board that leans against the wall stage left and it whacks hard to the ground as the audience jumps. By the time the bearded Caliban (Edward Hogg) leaps out in abhorrently yellowed pants and vest and scrapes bodily debris from his nether regions, throwing it onto the stage, the audience already know that dozing is not on the cards.

The Folio’s opening stage direction for The Tempest in 1623 requests: ‘A tempestuous noise of thunder and lightning’. This would have been achieved with fireworks and thunder-sheets, maybe a cannon ball rolled down a wooden trough or a loose length of canvas turned on a wheel to simulate the sound of high winds. There’s no need for any of this at the Ustinov. Christof Hetzer’s studio design imagines a white cube art gallery with video projections (of the storm, of the sea, of figures dancing), artfully poised boards and slabs leaning against walls, and an attenuated, otherworldly Ariel with T-shirt proclaiming ‘Invisible’ perching on high, as spaced-out performance artist.

A long window in the back wall looks through to the sea, which is sometimes calm, sometimes raging. There is a cotton wool cloud that also would not look alien in an art gallery that moves (with the script) from left to right, a strip of large pebbles at the back for the shipwrecked passengers to scramble over and a square pit of muddy soil that is fallen into and scraped and smeared around the stage. There are also projections in the early part of the play and during the storm of draped white figures dancing and carousing across the screens and copper panels at the back of the stage. These are transporting and unsettling images of the imagination and dreams, invoking The Tempest’s theme of white magic.

The Tempest in essence is about a shipwreck on a remote island, with Prospero, formerly Duke of Milan, invoking and directing the storm and then the actions of the shipwrecked figures, which include his treacherous brother Antonio (Finbar Lynch) and Alonso King of Naples (Derek Hutchinson). Prospero (Nicholas Woodeson) adopts a more benevolent character than other Prosperos, but he’s not short of venom or statuesque isolation and exudes a thrilling energy, totally convincing in his power game: “My high charms work, And these, mine enemies, are all knit up In their distractions. They now are in my power.”

Prospero’s sprite Ariel (Dickie Beau) is set apart physically from the other players, an ethereal, mesmerising presence with a recorded voice (that of Fiona Shaw, Warner’s long-time collaborator) where he mouths the words (and he has some thrilling ones, such as ‘where the bee sucks’ and ‘full fathom five thy father lies’), creating an eerily enhanced, intense presence. He also makes the most of a rather ghastly encounter with cling film stretched across his face (an appropriate allusion to his servitude and yearning for freedom). Miranda (Tanvi Virmani) who appears in her professional theatre debut and Ferdinand (Pierro Niel-Mee) play their romantic liaison with great physical vigour and the King’s jester Trinculo (Stephen Kennedy) and drunken butler Stephano (Gary Sefton) create unexpectedly raucous and clowning comedy scenes, with the help of Edward Hogg’s grimy Caliban (who believes Stephano is a god because he likes his wine).

The multiple strands and interpretations of The Tempest can make it a hard narrative to follow. But this visceral, modern production allows you to be so totally enthralled with the physical experience of the characters and their stage (or island) that there is no need to worry about following every thematic pathway. “We are such stuff as dreams are made on, and our little life is rounded with a sleep.” Ultimately Prospero’s Act 4 speech says it all. And Warner’s production does too.