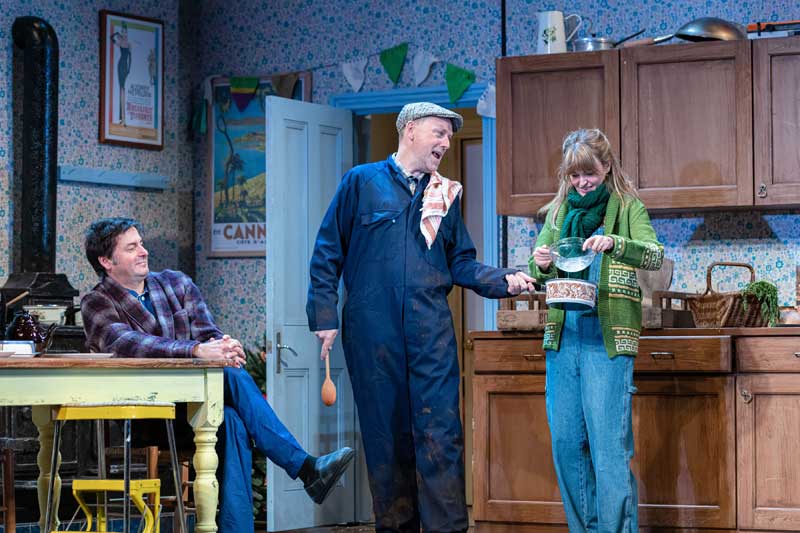 Those of us of a certain, erm, vintage don’t need reminding of The Good Life: the cosy British 1970s sitcom penned by seasoned writing team John Esmonde and Bob Larbey, and starring Richard Briers, Felicity Kendal, Paul Eddington and Penelope Keith in the roles of the now-iconic characters Tom and Barbara Good and their neighbours, henpecked Jerry Leadbetter and his social-climber wife Margo.

The premise? Tom Good tackles a midlife crisis bought on by his 40th birthday by giving up his job as a plastic toy designer in favour of living a self-sufficient lifestyle in the couple’s suburban Surbiton home (conveniently pretty much paid for by a legacy from one of Barbara’s relatives). But comedy gold storylines around Tom and Barbara generating their own electricity from methane, turning their front and back gardens into allotments and a home for their pigs, chickens and a goat and bartering crops for cash, wasn’t this hugely successful show’s only comedic device: cue Jerry and Margo dropping by at all hours of the day and night to add context, commentary and general ridiculousness.

When The Good Life hit the TV schedules, the ‘self-sufficient lifestyle’ was, in the ‘provinces’ at least, still largely shorthand for sex-crazed, dope-fuelled hippy anarchists living in communes. But Esmonde and Larby sensed that the times they were a’changin’, and put a revolution-in-the-making into a domestic setting, predicting the changing lifestyles of a nation that would eventually go greener than even they could have imagined.

Jeremy Sams’ new stage adaptation – premiering in Bath before embarking on a national tour – focuses more on the stresses and strains of close friendships rather than putting a Extinction Rebellion/Insulate Britain update spin on proceedings to carry the reboot along (spoiler alert: there are no panto-style Greta Thunburg references dropped into the script here). Instead, the storyline draws on references to classic, original Good Life episodes (Mutiny; Pig’s Lib; The Weaker Sex) with only a minor excursion involving the results of the characters inadvertently scoffing a cannabis-spiked poppy seed loaf (did that happen in the original TV series? If so, I can’t find a reference to it anywhere) to bring The Good Life to the stage.

Similarly, the ensemble cast channel the original actors’ playing the original characters to bring them back to life: Rufus Hound is Richard Briers’ spoilt, slightly bullying Tom; Sally Tatum is Felicity Kendal’s little-wife-with-a-big-personality Barbara; and Dominic Rowan is Paul Eddington’s browbeaten but still ambitious Jerry. And while Preeya Kalidas is, in essence, very much a Margo tribute act too, it is she who steals the show: not quite as bullishly inept and cartoonishly, skilfully ridiculous as Keith’s incarnation (hey, those are difficult platform sandals to step into) but still an outrageously obtuse, absurdly self-centred, gloriously glamorous stickler for social decorum, and the camp gift that keeps on giving throughout this inoffensive, well-executed, comfortable trip down memory lane.