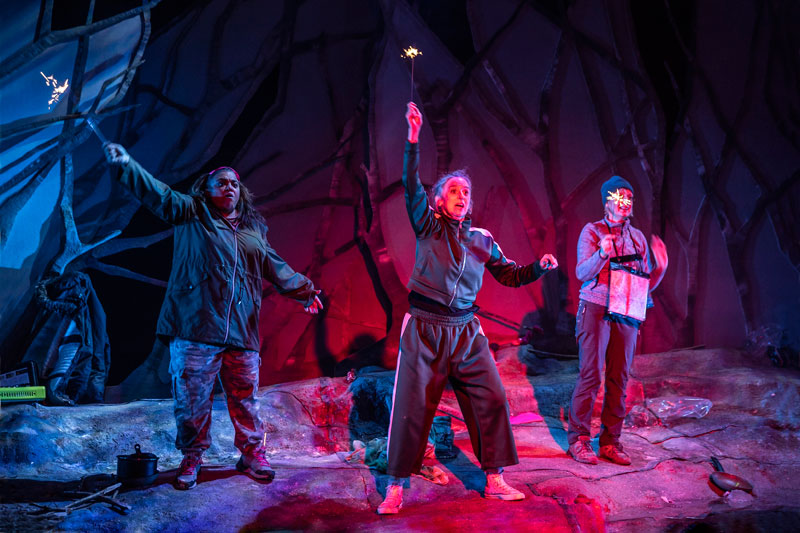 The set-up: four women on their office’s annual outward bound team-building weekend get stuck on an island in the Lake District. The writer: Tim Firth (Calendar Girls; Kinky Boots; Our House). The result: a beautifully-executed, mild-mannered farce… portraying how men of a certain age continue to view women of a certain age despite the fact that everybody’s surely long since moved on from the bad old days when the word ‘menopause’ was never to be uttered in public, women were inept, incapable fools and people suffering mental health issues were referred to as ‘doolally’.

But despite such an ostensibly damning summary, Sheila’s Island is most definitely not without merit. Judy Flynn (Shameless; The Brittas Empire; The House of Elliott) is perfectly hapless as Team Leader Sheila. As not-quite-as-ditzy-as-she-seems HR Manager Julie, Rina Fatania does a grand job of keeping comedic attention levels up. Sara Crowe is well on the way to painting a very moving portrait of emotionally fragile Fay (if, that is, Firth had allowed his characters to explore rather than totally ignore the fact that their colleague is on the edge of contemplating suicide). And, in the production reviewed here, understudy Tracy Collier was stunning in her portrayal of bitter, resentful cynic Denise, whose merciless criticism of her colleagues gives some much-needed bite to this Marmite sandwich.

Meanwhile, the set, lighting and soundscapes all work in perfect harmony with the unfolding drama: craggy rocks, windswept trees, lapping water, eerie cawing, sunrise/sunset and a karaoke ship passing in the night add gravitas to the marooned quartet’s predicament. But overall, the script strays a little bit too close to the discomfort zone of male writers telling women how women who have passed the 40+ watershed behave.

It’s interesting that Firth adapted Sheila’s Island from his original 1991 script for Neville’s Island, his first major theatre commission that put four male, middle-aged middle managers in the spotlight. “At 20-something, I wouldn’t have believed that women could do to other women what men did to other men on that island,” Firth says, in his Writer’s Note for the programme; “the intervening years have disabused me of this ridiculous and patronising assumption”. Having not seen Neville’s Island, one can only assume that Neville and his band of survivors did, to each other, a lot more than Sheila and her colleagues do today; as slick and (at times) funny as this production is, it doesn’t do much for 2022 audiences other than mildly entertain.