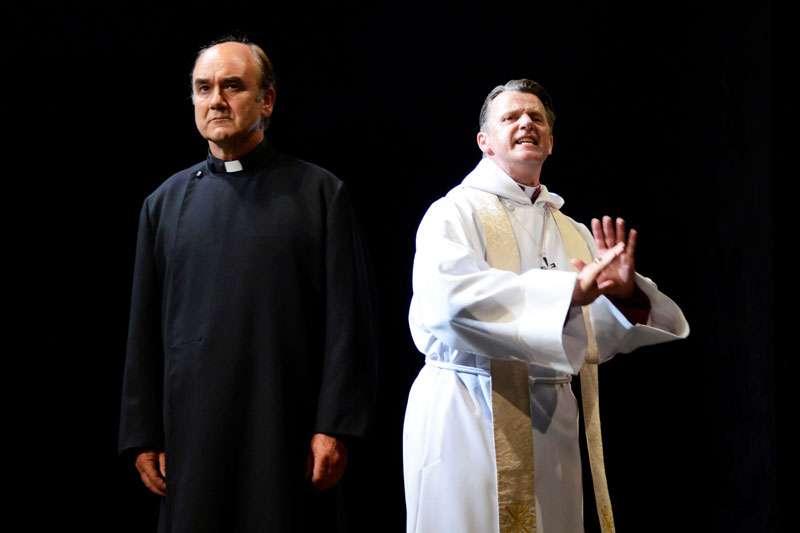 Definitions and judgment calls around the notion of faith abound, the Church of England is in crisis and the tabloid press are obsessed with ‘outing’ gay men in positions of power. So, what year are we in? Well, actually, we could be in any year since time immemorial, but for our purposes right here, right now, we’re enjoying a revival of acclaimed British playwright, screenwriter and director David Hare’s award-winning, globally popular drama, which opened at the National Theatre in 1990 and still remains richly astute, acute and thoroughly modern today.

Racing Demon focuses on four clergymen based in a south London parish, all of whom are battling a race with their own… well, personal demons. The team is headed up by the Reverend Lionel Espy, an ‘old school’ Rev whose faith is dwindling faster than his congregation – little wonder, then, that enthusiastic young curate Tony Ferris represents a capricious cat skittering around amongst the doves of peace.

Meanwhile, Rev Donald ‘Streaky’ Bacon is more interested in tequila than testaments, while Rev Harry Henderson is trying hard not let the fact that he has a boyfriend distract from ecumenical matters, despite the fact that his relationship is set to make headline news on Sunday morning, just in time for church. It may sound like we’re watching an episode of Father Ted but, despite such a set-up, we’re most definitely not on comedy territory here.

As is typical with a Hare play, the characters are multi-faceted individuals almost too painfully human, at times, to watch. Paapa Essiedu is utterly compelling as young buck Ferris – he may appear to be headstrong and charismatic, but as the drama rolls along, cracks in his armour appear, revealing all the confusion, pain and vulnerability that creates the perfect recipe for a deeply troubled individual. Similarly, Espy (a subtly enthralling performance from David Haig) is at once brave and tender, slightly irritating but easy to empathise with.

As for Sam Alexander as the daft, eminently likeable Streaky: I can’t help thinking that if I was a Church of England priest (and I could be, these days; gosh, what would Espy have made of that development?), I’d probably prefer oysters and chateaubriand at The Savoy to Sunday Service too.

Supporting characters add much to the mix here as well: Anthony Calf as the emotionally bulletproof Bishop of Southwark is a force to be reckoned with, while Heather Bonnard as abused parishioner Stella Marr adds further perspective to lengthy debates around the role of the church in today’s society.

All in all, it’s refreshing to see the subject of faith being dealt with in such an uncynical, intelligent way in this sceptical, pessimistic, jaded age. The drama may take a meandering rather than direct route to denouement, but it shrewdly avoids any form of sneering at an institution riddled with crisis, as all too many contemporary writers on the subject tend to do.

It may have been written almost three decades ago, but Racing Demon still deserves to hold pole position on the Best of British Theatre Charts today. Praise be.