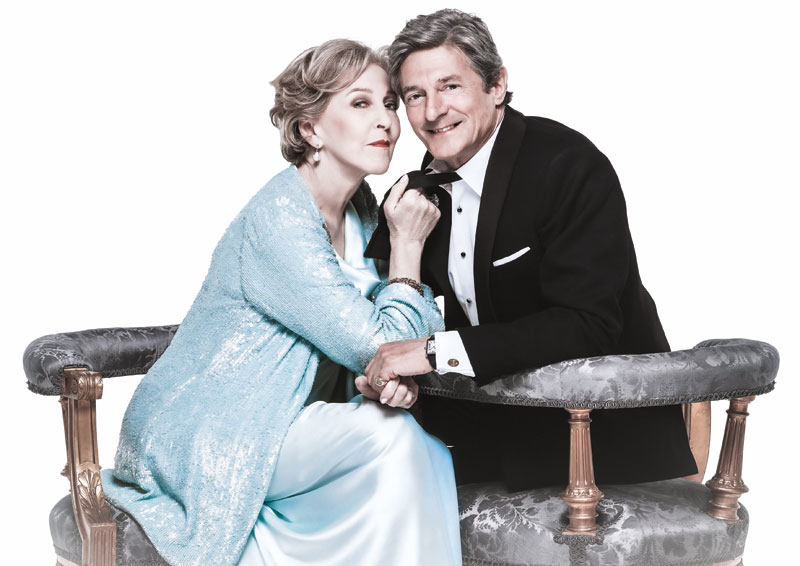 Cocktails, ‘correct’ conduct and covert liaisons; melodrama, ego and simmering frustrations: Private Lives – widely regarded as the most credible of Noël Coward’s many exposés of the real lives of the superficially respectable ‘upper classes ‘– is the playwright at his witty, acerbic best, laden with pithy one-liners, plenty of gentle digs at the societal mores of the day, and a very elegantly-dressed cast lounging around on a very elegantly-dressed set. But at the heart of the matter, Coward’s dramatic portrayal of a rancorous, egotistical and selfish couple fond of playing dangerous emotional games led journalists at the 1930 premiere of a play that was ostensibly billed as a ‘comedy of manners’ to run the gamut of criticism, from “delightfully daring!” and “thrillingly shocking!” to darker comments, including The Times labelling Coward as “a master of unceremonious ceremonies” and a writer for the New Statesman noting that “he disguised the grimness of his play; his concept of love is really desolating”.

Ninety-one years later, we’re so familiar with the concept of seeing other people’s private lives made public in the name of entertainment that shock value holds little shock any more; these days, other people’s domestic dramas offer escapism rather than outrage.

Coward wrote Private Lives during a fortnight’s enforced convalescence in Shanghai, having contracted flu in the middle of an extensive Asian tour. Did the play’s locations provide the writer himself with a bit of escapism? Possibly. The drama opens on the balcony of an upmarket hotel in the French seaside resort of Deauville before moving on to an equally upmarket Parisian apartment, both of which offer the perfect backdrops for dashing sophisticate Elyot Chase, his nice-but-dim young bride Sybil, the spirited, vivacious Amanda Prynne and her stuffy, conventional, rather dull new husband Victor to flaunt their upper-class snob credentials. The quartet’s present circumstances are quintessential Coward too: Elyot was formerly married to Amanda, and now, five years after their divorce, they inadvertently find themselves honeymooning with their new partners in suites with adjacent balconies at the very same time, in the very same hotel.

While Coward’s script is laden with all manner of expeditious quips, nimble badinage and elegant ripostes, the lack of emotional spark between the characters in this elegant revival – the inaugural show from much-loved British actor Nigel Havers’ brand-new theatre company, and starring Havers himself as Elyot – doesn’t always allow the Coward chemistry to work its magic.

Havers’ swiftly establishes Elyot as the urbane, cosmopolitan, rather ungentlemanly gentleman that made both his first wife and his young, naïve second bride so enamoured of him, but Natalie Walter’s Sybil is a bit too sketchy/flighty to return any bang for Havers’ buck. Similarly, it’s difficult to believe that Patricia Hodge’s exuberant, feisty Amanda would make any connection at all with Dugald Bruce-Lockhart’s rigid, one-dimensional Victor. But perhaps that makes Elyot and Amanda’s decision to rekindle their old flames, snuff out the new ones and tango their way to Paris to “defy convention” less of a surprise, and more of a “God yes, just go for it!” moment.

Dragged back into a endlessly revolving cycle of unbridled passion and equally unbridled hatred, Amanda and Elyot quickly allow their rekindled relationship to be consumed by all manner of insecurities and loathing, culminating in a brawl that all but wrecks Amanda’s swanky apartment… and of course, Sybil and Victor track Amanda and Elyot down, and walk in halfway through the domestic war that’s raging, with both Walters and Bruce-Lockhart admirably picking up the pace to breathe fire, ice and spice into their characters in good time to make the denouement suitably dramatic.

It’s left up to us to make up our own minds as to what could possibly have happened to all four characters after two of them tiptoe off, hand in hand. But the typical Coward device, which also punctuates the finales of Hay Fever, Present Laughter and Blithe Spirit is, on many levels, part of the expected charm of taking a seat for yet another revival of one of his many Greatest Hits. To quote Coward himself, speaking of the first West End revival of the play (the Apollo Theatre, 1944), “this production is a pleasantly watchable rendition indeed, nicely bridging the dull gap between cocktails and supper” – as is the case with so many of Coward’s classic quips, that one still cuts ice today.