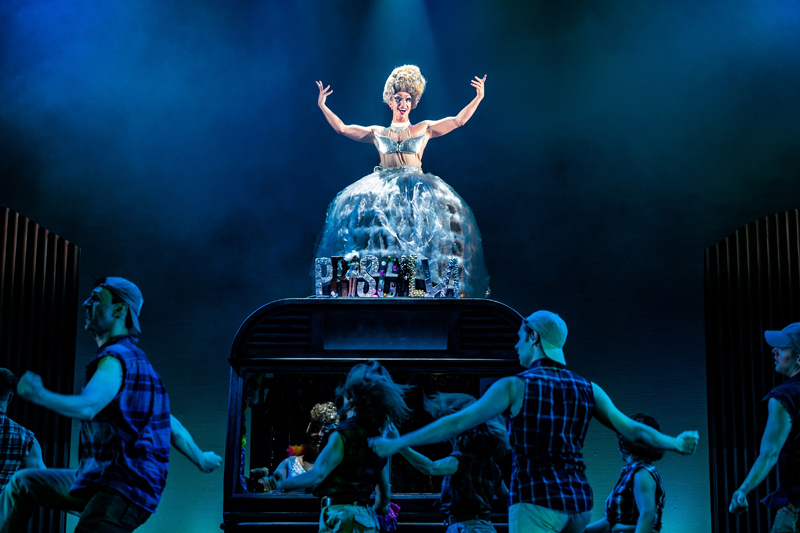 Restrictions are lifting, holidays are on the near horizon and happy days are (almost) here again; if we’re going to have any kind of coming out party at all, three drag queens in a battered camper van are the perfect hosts.

When writer/director Stephan Elliott’s uniquely offbeat Australian road movie The Adventures of Priscilla, Queen of the Desert shimmied into the cultural consciousness in 1994 it became an unexpected worldwide hit, lauded and applauded for bringing an intelligently positive portrayal of LGBT themes to a mainstream audience and swiftly earning global cult classic status. Twelve years later, the stage musical adaptation premiered at Sydney’s Lyric Theatre; since then, Priscilla has dragged Bernadette,Tick/Mitzi, Adam/Felicia and all the tears, tantrums and tiaras their battered suitcases can hold to theatres around the world multiple times… and on this outing, they’re in the hands of a very competent tour guide.

Having appeared in the role of Tick/Mitzi in the 2009 London stage (and touring) production of Priscilla, Jason Donovan knows far more than most about keeping the show’s wheels turning. In 2019, he hung up his high heels and stepped into the producers’ shoes for the first time; the production we’re focusing on today is the result of Donovan’s career gear-shift. And the boy’s done good! But overall, Priscilla owes as much to each and every member of the impressive ensemble cast as she does to the leading ladies (and gentlemen, of course) both front and backstage. The music, choreography and terrifically sharp one-liners are flawlessly tight and perfectly-timed, the extravagant costumes suitably spectacular, the overall vibe uproariously, gloriously exhilarating, and the entire production infused with humanity and bonhomie at every turn.

From the get-go, most of the cast are wearing gaudy frocks, sparkly underwear, sky-scraping wigs and very, very high heels – and that’s just the men. Several of the women, meanwhile, are dressed in the style of a flock of Folies Bergère dancerscirca 1978 while many more characters fall somewhere in between ‘traditional’ feminine/masculine categories – and Priscilla herself hasn’t even taken to the stage yet.

Priscilla is the battered old bus responsible for transporting two young drag queens (Tick/Mitzi and Adam/Felicia) and a more mature transgender woman (Bernadette) across the Australian desert from Sydney to a resort in Alice Springs, where they are contracted to perform a show… and where Tick/Mitzi will be reunited with his estranged-but-still-close-friend wife and their young son.

But even putting thoroughly modern family structures – let alone the personalities and profession of our gaggle of gloriously glamorous guides – aside for a moment, this is no regular coach trip.

As the tantalising trio wend their way to their destination, they encounter and endure all manner of unexpected obstacles and experiences along the way, including emotional and mechanical breakdowns, homophobic incidents, a Thai bride with a unique skill involving ping-pong balls, and the rekindling of a very strong old flame whose burning passion for a certain lady has never been extinguished. And, as we’re on musical theatre territory, the hits that punctuate each and every scene just keep on coming, resulting in a jukebox of a classic dance floor hits from It’s Raining Men to I Will Survive by way of Go West, I Say a Little Prayer, Pop Muzik, Girls Just Wanna Have Fun, I Love the Nightlife and loads and loads more in a similar genre, all performed live mostly by a trio of glamorous divas in suitable glamorous diva attire, accompanied by a live orchestra. Party on? Yup, from start to finish, punctuated by an impressive, highly moving moment featuring ditzy young hedonist Adam/Felicia (played to the deliciously, delectably, consummately camp max by Nick Hayes) miming to Sempre Libera while standing on top of a bus driving through the Australian desert.

Miles Western is magnificent as witty, proud matriarch Bernadette, a role indelibly associated with Terence Stamp in Stephan Elliott’s 1994 film; if Stamp was a hard act to follow, Western – one part Danny La Rue, one part Luis Molena, all parts lady – kicks him to the kerb. Edwin Ray’s Tick/Mitzi flits between featherlight, fickle and frothy to complex and troubled at the snap of a perfectly manicured fingernail (and boy, can this boy dance – watch out in particular for his MacArthur Park moment in the spotlight). But underpinning the whole spectacular spectacle, solidly serious issues around the search/fight for living your best life morally, emotionally and with dignity are intelligently woven into the fabric behind the sequins, stardust and super-speedy wit.

Priscilla delivers an uplifting treat for all the senses… and sets an example to all of us regarding how to do a coming out party in style.