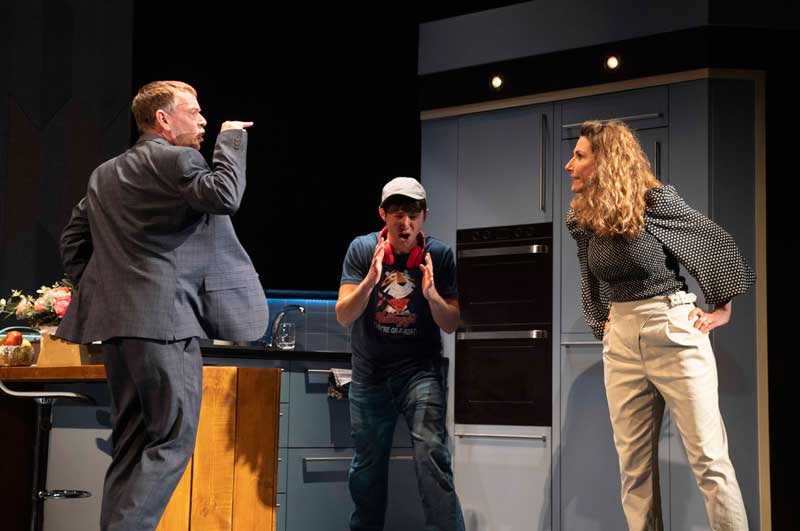 Eighteen million people across the globe are familiar with the character of crime writer Peter James’ Brighton-based Detective Superintendent Roy Grace: a complex man haunted by the disappearance of his own wife, now hell-bent on solving seemingly unsolvable murders and wrongdoings on his own East Sussex coast beat. James penned 18 books in the Roy Grace series, and both the first (Dead Simple, 2005) and this one, the second in line published in 2006, have been adapted into feature-length films for ITV in the popular Grace series of crime dramas.

The plot: Tom Bryce finds a memory stick left behind on a train seat, and brings it home, ostensibly planning to do a bit of domestic detective work in order to return the stick to is owner. His teenage son Max manages to unlock the stick… and dad and son witness a live screening of a horrific murder, the details of which they decide to keep away from Tom’s wife/Max’s mum Kellie. Cue the already troubled Bryce family’s life drastically unravelling while Detective Grace attempts to get behind the high-tec smoke and mirrors to reveal the shocking plot-within-the-plot.

The journey of popular contemporary fictional detective flitting from book to TV screen to stage can be a complicated case to follow. Some do it with skill, flair and aplomb (Inspector Montalbano; Grantchester; Vera; et al), others take the ‘two out of three ain’t bad’ route  (the 2016 film version of British writer Paula Hawkins’ edgy 2015 psychological thriller The Girl on the Train was pretty much universally panned, but the 2018 stage adaptation was a theatre-world hit) and several deserved to die a horrible, lonely death (Dan Brown’s 2003 epic mystery thriller The Da Vinci Code, for example, was a huge, highly acclaimed lit-hit, but the 2006 film version tops multiple ‘worst book-to-film adaptation’ charts; watch this space for a forensic examination of the stage version, coming to Theatre Royal Bath early next year). And my point, your honour, is….?

While Looking Good Dead most definitely doesn’t fall into category three of my case for the prosecution of Crimes Against Crime Writing and isn’t quite a photofit for category two either, the jury’s out on whether or not it quite deserves the ‘Get Out Of Jail Free’ card awarded for skill, flair and aplomb .

As Tom and Kellie Bryce, Adam Woodyatt and Gaynor Faye offer passable characterisations of a formerly comfortably off couple on the verge of financial collapse… but 28-year-old Luke Ward-Wilkinson in the role of their 17-year-old son Max detracts from the legitimacy of the family set-up. Harry Long as Roy Grace, meanwhile, manages to be suitably sagacious but doesn’t reveal any of the intricate personality attributes that made his character so memorable in either the books or the TV series, while his sidekick sergeants Glenn Branson (Leon Stewart) and Bella Moy (Gemma Stroyan) lean too closely towards Top Cat’s Officer Dibble for inspiration for their crime-solving skills.

The all-important sinister baddies, however (not naming names here as this is a strictly no-spoilers review) do an admirable job of being really bad, and the slick set adds the required edge, menace and suspense to a handful of edgy, menacing, suspenseful scenes that, sadly, often feel a little bit too rushed-over for full impact.

Overall, Looking Good Dead feels a little more lighthearted than I’m guessing James intended it to be, and a bit more school-play than you’d want from a serious thriller. When the serious thrills within the tale are allowed to come to the fore, they look good indeed; elsewhere, though, the production tends to overdo the Scooby-Doo in terms of inspiration for breathing theatrical life into this menacing drama.