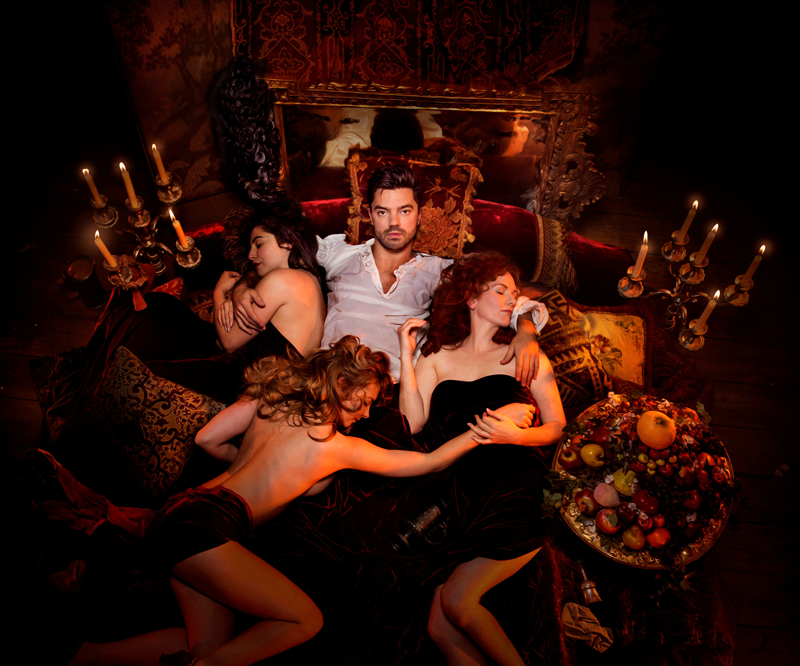 The Libertine, starring Dominic Cooper, is on at Theatre Royal Bath until Saturday 17 September

John Wilmot, second Earl of Rochester, was a very naughty boy indeed. If Aerosmith’s Steven Tyler took relationship advice from Giacomo Casanova before consulting Made in Chelsea ‘bad boy’ Spencer Matthews for lifestyle tips, you’d end up with a character not too dissimilar from the central protagonist in Stephen Jefferys’ 1994 play, showing at the Theatre Royal Bath right now, and starring Dominic Cooper (of whom, of course, more later) as the main man.

But Rochester wasn’t all and only about living it large; he was (and is still widely regarded as) one of the most highly-acclaimed English poets, and was courtier and general flag-flyer of King Charles II’s Restoration court, which emerged as a reaction to the spiritual authoritarianism of the Puritan era under Cromwell.

With his Merry Gang to support him (including Charles Sackville, Earl of Dorset and Middlesex, and playwright George Etherege) Rochester participated in all manner of extravagant frolics, while remaining married (albeit perhaps on paper only) to wealthy heiress Elizabeth Malet until his untimely death aged just 33… and all the while, apparently effortlessly churning out massive amounts of original poetry and translations of the work of classical authors such as Ovid, Seneca and Petronius. Phew!

Imagine how prolific Rochester would have been had he not indulged his obsessions with wine, women and song… but then again, if he had taken the path of righteousness, Bathonians in need of a lusty romp around 1670s London wouldn’t be half as satisfied by the shenanigans currently taking place on the Theatre Royal stage.

Rochester’s role as ‘mentor’ to young, promising actress Elizabeth Barry has inevitably turned into an affair, Charles II is struggling with the boundaries between his friendship with Rochester and the dangers posed by his displays of contempt for his king, and Rochester’s wife Elizabeth Malet (probably lucky for Roch that two of the key women in his life shared the same name) is – well, how would any young woman feel if they were married to a legendary lothario and systematic sybarite? Alice Bailey Johnson is just perfect in her role as that sad, beleaguered wife, with her frustrations bubbling away just below the surface and a tenderness that brings wholly authentic, raw emotion into scenes that could otherwise all too easily give way to soap opera theatrics. Will Merrick as Billy Downs, Dominic Cooper as John Wilmot, second Earl of Rochester, Mark Hadfield as George Etherege and Richard Teverson as Charles Sackville, Earl of Dorset & Middlesex in The Libertine

On the other end of the seesaw that is Rochester’s love life, Nina Toussaint-White as his long-term, regular ‘escort’ Jane makes for a callous, calculating contrast with Elizabeth’s vulnerable, tender attempts to keep her man. And Richard Teverson is just delicious as Charles Sackville; his lines may be few, but his presence (a leaden-white face beneath a full-on, enormous powdered wig; the swoosh of his elaborate frock coat; the rhythmic clickety-click of his buckled heels and knob-handled cane always in perfect harmony) is an utter joy to behold in all his scenes, at all times.

Talking of which… while scenery is kept to a minimum, largely courtesy of clever use of back-projections, costumes are pushed to the fore in this drama; we’re in Adam and the Ants’ Prince Charming video territory here –  you half expect Diana Dors to suddenly waltz on stage – and fans of the 1980s New Romantics era in particular are set to swoon. Talking of which… ah yes, that leading man.

Best known for his roles in Alan Bennett’s The History Boys, the 2008 film version of Mamma Mia!, The Duchess alongside Keira Knightley and, most recently, the Amazon Prime series Preacher, Dominic Cooper might well make his mark as a mature British actor to be reckoned with courtesy of this production.

If you, like me, find his performance a little underpowered during the drama’s opening scenes when Rochester details his fondness for sex, drugs and the 1670s version of rock’n’roll – plus his disdain for the audience he’s taking on the ride with him – and find you can’t quite attach yourself to his velvet coat tails, bear with him – I don’t think I’m mistaken in saying that ‘the build up’ is wholly intentional and cleverly deliberate.

By the time the closing scene comes around, in which Rochester implores the audience to understand him, asking us “do you like me now?”, we most definitely do – or at least, we can manage to empathise with him; after all, he’s been nothing but frank in his attempts to explain who he is and why.

But was Rochester a bad boy made good, or a good boy gone wrong? Was he a waster, or a wunderkind? Is Dominic Cooper as charismatic as Johnny Depp was, in the 2004 film version of the same role? As the real Rochester himself once wrote, “the difference lies, as far as I can see, not in the thing itself, but the degree”.

As for hedonism, excess, debauchery, conspicuous consumption and extravagance… John Wilmot, second Earl of Rochester, could have taught those Made in Chelsea kids quite a few tricks.

The Libertine will run at Theatre Royal Haymarket, London from 22 September – 3 December 2016.