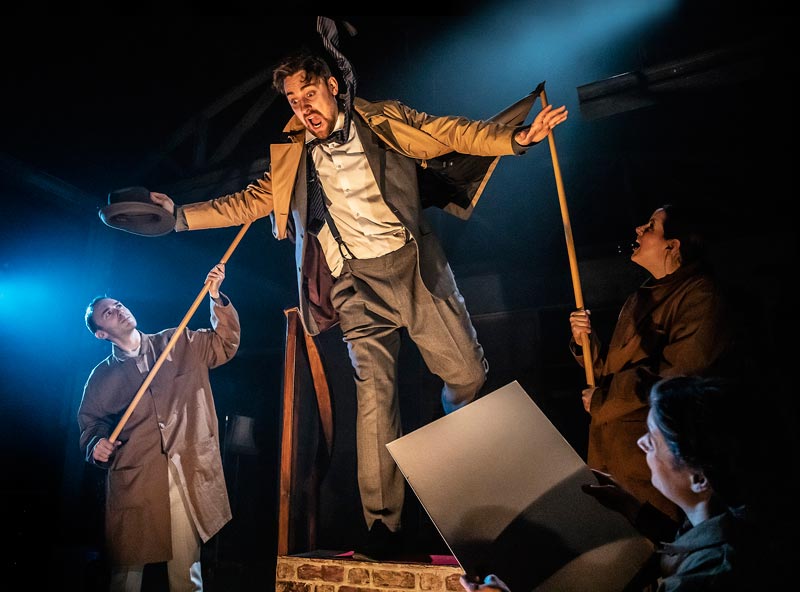 A beautiful starlet has been stabbed to death on a film set, and sardonic sleuth Stan Shakespeare is poised to find out whodunnit. Classic noir? To misquote Humphrey Bogart’s iconic Sam Spade character (who partly inspired this production), “don’t be too sure that Crimes, Camera, Action is as crooked as it’s supposed to be…”

Having already rollicked us through three Christmas-themed Crimes, one on the coast and a fifth in Egypt, the latest instalment in New Old Friends’ series of comedy thrillers (premiering in Bath prior to a national tour in 2022) takes us back to the golden age of Hollywood, when men were tough guys, women were babes and pretty much everybody spoke with a drawl – or in this case a lisp, perhaps? Or maybe in in totally jumbled-up sentences that make more (and much funnier) sense than their original meaning intended? Oh, take your pick – and there’s plenty to pick from here.

As for the plot… in NOF world, it pretty much matters not. A constant bombard of set-up/punchlines and a series of set pieces laden with fast-paced wit, smatterings of slapstick and plenty of references to vintage screwball comedy capers take us from conception to climax at an unrelenting pace, with suspense and none-too-subtle silliness keeping attention levels up at all times. It’s a technical tour de force too; a scene played over and over again in rewind/fast forward/slow motion and a glorious moment involving ‘three’ dancing showgirls rightfully earned impromptu rounds of audience applause, while costume changes (mostly right before our very eyes) are faster than an Astaire/Rogers quickstep.

At the centre of the action, Feargus Woods Dunlop’s Stan Shakespeare is a super-slick comedy character stalwart and a master of the art of improvisation. But overall, the production relies on the true meaning of ensemble to work its magic; there’s not a single weak cog in the multitasking, energetic 4-strong cast that prevents this glorious wheel of hilarity to keep on rolling at every moment, from… well, from set-up to punchline, over and over and over again.