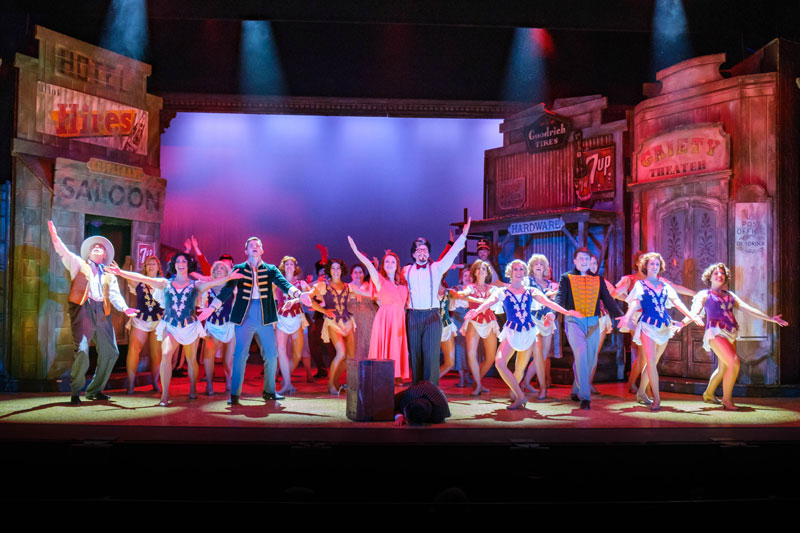 Theatre review: Crazy For You

The Bath Operatic and Dramatic Society, founded way back in 1894, has a longstanding reputation for producing memorable, elaborate productions – and their 2022 production of Crazy for You reinforces that reputation in fine style.

This enduringly popular, award-winning Gershwin hit (largely based on the legendary songwriting team’s 1930 musical Girl Crazy) basically follows a classic rom-com, show-within-a-show, adversity/triumph storyline: young New York banker (and wannabe stage entertainer) Bobby Child’s overbearing mother sends him to a Wild West outpost to foreclose on a failing theatre owned by a family business. When Bobby falls in love with local postmistress (and theatre owner’s daughter) Polly, he comes up with a plan to to produce a show to save the theatre, put himself in the spotlight… and get the girl.

Rosie May Cook is a fabulously feisty Polly, flaunting a vocal range that swoops and soars in all the right directions at all the right times. With Arnie Richardson putting so much mischief, exuberance and energy into the role of Bobby, it’s easy to see why Polly falls for him – and why the pairare made for each other. But away from the rollickin’ romance, much of the storyline looks to clever comedic cameos to keep the narrative lively while yet more relies heavily on complicated choreography to keep the razzle dazzle attention levels up at all times – and this is where BODS interpretation of the true meaning of ensemble really comes to the fore.

Dancing cowboys? You got ’em! Sequinned showgirls in shiny tights? Oooh, very much yes. City slickers, eccentric British tourists, an idiosyncratic impresario? Tick, tick, tick. Meanwhile, BODS Musical Director Peter Blackwood’s impressive orchestra, hard at work down in the pit throughout, deserve as much credit as those in the onstage spotlight as the show’s Big Numbers (I Got Rhythm; They Can’t Take That Away From Me; Embraceable You; Nice Work If You Can Get It; Someone to Watch Over Me – you may not have thought you’re familiar with the Crazy for You soundtrack, but you know it so well) keep on coming. And all the time, at every moment, there’s not a single weak cog preventing this gloriously exuberant theatrical wheel to keep on rolling along on stage at every moment, from prologue to fabulously glitzy finale.

BODS have once again proved that they’ve got rhythm and much, much more; embraceable indeed.

Crazy For You, Theatre Royal Bath, until 7 May; theatreroyal.org.uk