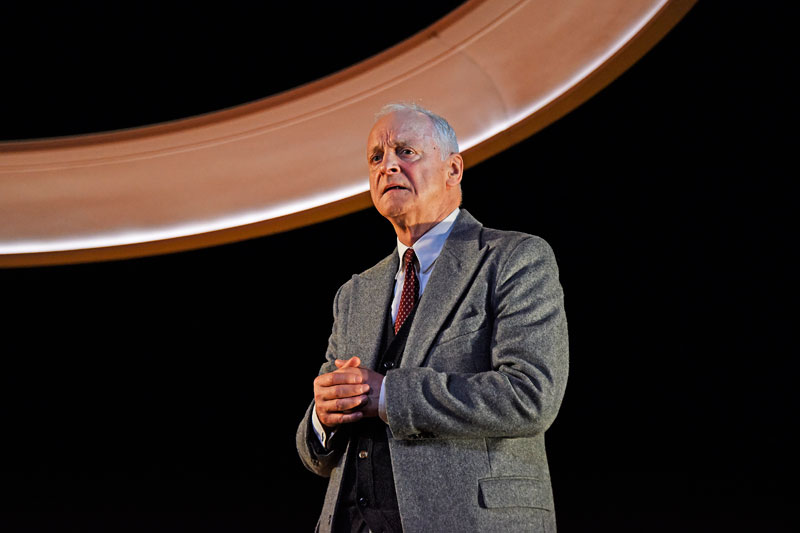 Some time in the late 18th/early 19th centuries, William Blake called hindsight – the ability to understand an event or situation only after it has happened –  a wonderful thing, unwittingly spawning one of the most over-used cliches of our modern age. Few people, however, complete the quote with Blake’s follow-up on his philosophy: foresight is even better.

When Michael Frayn’s play examining the possible motivations behind theoretical physicist and quantum mechanics hotshot Werner Heisenberg’s 1941 meeting with his former mentor, Niels Bohr – the 20th century Danish physicist whose Nobel Prize-winning ‘atomic model’ forms the basis for our understanding of how the world is structured – premiered in 1988, it’s unlikely he had the foresight to predict the long-term success of such a cerebral, semi-esoteric drama. But here we are 23 years later, resurfacing in a post-lockdown world, contemplating the ‘new’ here and now in an environment that’s thrown up multiple “with hindsight” issues to consider. But despite all the challenges, difficulties and woes that recent events have thrown at us, we must never forget that the here and now has an even more troubled history.

Nazi occupation, air raids and battles; ration books, multiple fatalities, fear and mistrust; 80 years ago, Britain – and the world – was broken by war. And while all that was going on…

Thanks to Michael Frayn, what happened in Copenhagen during that time was not destined to stay in Copenhagen – and the dynamic that underpinned a meeting between two of the world’s most influential scientists of the time was explosive on many levels. Was Heisenberg’s approval of atomic weaponry immoral? Was Bohr’s research into the development of an atomic bomb unethical? Was Heisenberg in search of moral guidance from his friend and mentor… or flaunting his superior status as a leading scientist of the all-conquering Third Reich?

Around a decade after WWII ended, Heisenberg maintained that he only and ever visited Bohr to discuss his own ethical concerns about nuclear weaponry; Bohr, however, claimed that Heisenberg had no qualms about creating atomic weapons for the Nazis. With their recollections differing, and with no definitive account of the exchange existing, Copenhagen offers only a fictionalised account of this historic summit. By setting the play in some kind of afterlife (when we ‘meet’ them, Heisenberg, Bohr and Bohr’s wife Margrethe have been dead for years) Frayn’s impeccable research is wrapped in a tightly-woven cloak of intelligent imagination that turns ostensibly impenetrable subject matter into an emotionally complex, fly-on-the-wall peek into the fascinating lives of three fascinating people, at a fascinating time.

This production of Copenhagen was delayed twice by lockdowns, which explains why both Polly Findlay and Emma Howlett are credited as directors. But such difficulties have not wearied this modern classic, nor the years condemned it.

The stylish, spare set (a couple of chairs, a revolving circle lit by a giant halo)  offers a blank canvas on which the three characters dance an elegant, timeless time warp as they by turn disclose, reveal, discuss, remember or choose to forget the machinations of their complex relationship, from personal family tragedies to laboratory experiments by way of long post-dinner walks in the garden, skiing holidays and What Might Have Been.

Bohr’s cool, calm wife Margrethe (played to the cool, calm max by Haydn Gwynne) calculates, evaluates and subtly chairs the various debates, offering perspective and enforcing discipline in equal measure. Philip Arditti’s charismatic Heisenberg quicksteps from deferential to self-righteous, regretful to conceited, tormented to ruthless, at the flick of a switch. But it is Malcolm Sinclair as Bohr who brings the almost ethereal, dreamlike recounting of a distinctly down-to-earth event to corporeal life. Contemplative, astute, sagacious, measured, unassertively humane and, at times, downright funny, he’s the sympathetic professor, the clever friend who never condescends… and the father figure who isn’t afraid to admit he made mistakes.

For sure, Copenhagen asks a lot of Big Questions, with morals, values, friendship, memory and the politics of war all in play, all of the time. While Frayn doesn’t attempt to offer answers from any perspective, you don’t need to be an expert in quantum physics to understand the questions at the heart of the matter: why do we do the things we do, when we do them – and if we had the chance to do the same thing over again, would we?

Hindsight, eh? In Frayn’s hands, it’s a wonderful thing – and he had the foresight to recognise this, by taking us back to Copenhagen.

Copenhagen is at the Theatre Royal Bath until 26 June theatreroyal.org.uk