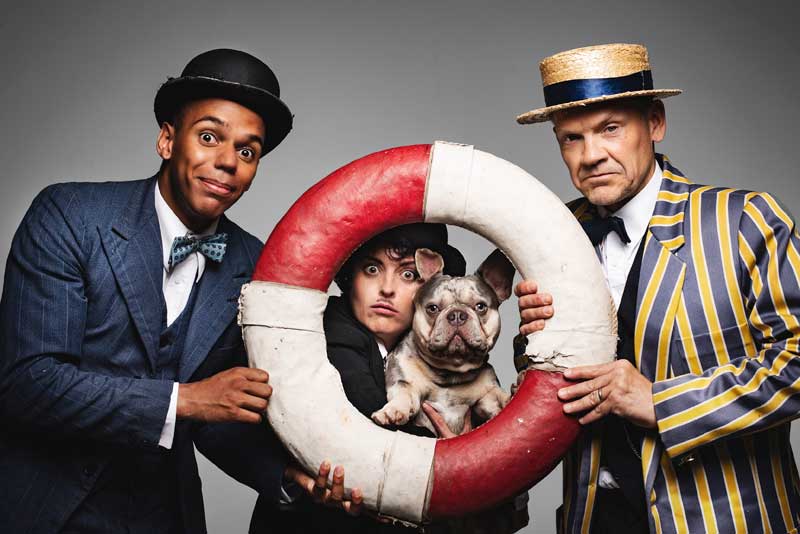 At the end of highly acclaimed theatre company Told by an Idiot’s tale of Charlie and Stan (“a deeply moving homage to two men who changed the world of comedy forever”), my very clever friend made a very interesting observation: “watching that, you can see why people didn’t want the silent movies to end, can’t you?”

I hadn’t immediately thought of the experience in that way. But my very clever friend was cleverly astute: we’d been in the company of a group of people who’d said a lot by saying nothing at all… to gloriously entertaining effect.

In 1910, British music hall impresario Fred Karno took his “army” of comedians – Chaplin, Laurel and Chaplin’s understudy Arthur Jefferson (who later adopted the name Stan Laurel) amongst them – to New York. Little is actually known regarding the details of how the trio interacted on the voyage that represented their first steps en route to becoming the three most iconic comedy artistes of the silent screen era. Indeed, Charlie and Stan director Paul Hunter tells us, in his programme notes, that he valued “fiction over fact [and] fantasy over reality to shine a very unusual light on a pair of show business legends.” But although we’re floating on an island of make believe as we make their transatlantic journey with them, any hint of over-whimsical charm is firmly anchored down to earth by sharp direction, clever scenery and powerful spotlight moments that bring the tale to life.

Script? There isn’t one (unless you count a smattering of spoken words, a handful of projected captions and the odd song). And rightly so, given the theme; we are, after all, witnessing the point where silent movies met vaudeville – it was only the advent of the ‘talkies’ that made earlier films ‘silent’; up until that point, they were just ‘movies’… and this production moves on many levels.

You don’t have to be a fan of slapstick to enjoy Charlie and Stan. Although there are pratfalls a-plenty, several boing-boings of a frying pan on a head and all manner of rollicking rolling-around-the-stage moments to enjoy/endure depending on what makes you giggle, Hunter offers highly textured, potted biographies of his characters that are as tear-jerking as they are rib-tickling; a flashback to Chaplin’s childhood, for example, paints a portrait of poverty-stricken Victorian-era misery (complete with an alcoholic father, a demented mother and a bullying bailiff) so vividly that even the fabulously farcical moments within the scene aren’t allowed to detract from Chaplin’s backstory reality.

But of course, none of that ‘reality’ could come to life without a self-assured cast. At her upright piano, Sara Alexander keeps the beat bouncing along, taking a break at one point to double-up as Chaplin’s tragic mother and leaping into the action again later on, when an unwitting member of the audience is roped in as her temporary understudy. Meanwhile Nick Haverson multitasks as the heel-rolling, braces-snapping, cigar-chewing Karno and Chaplin’s derelict dad before transforming himself into an impeccably characteristic Oliver Hardy, and Jerone Marsh-Reid is an utterly loveable, plaintively naïve Stan Laurel.

But overall, it is Danielle Bird’s Chaplin who steals the show by combining her clearly innate ability for traditional theatrical storytelling with impeccably choreographed physicality and lashings of charismatic wit. When Bird finally (but subtly) transforms into the Chaplin ‘character’ that eventually turned him into an international superstar, it’s almost as though we’re witnessing Chaplin himself on the Theatre Royal stage, baggy pants, huge shoes, tight coat, walking stick, little hat, odd little moustache, knowingly innocent expression, rolling walk and all. By the time the ship rolls into harbour against a backdrop of the bright lights of NYC and and the smooth tones of Eric Clapton’s beautiful interpretation of Smile (the original instrumental version of which was written by Chaplin for his 1936 film Modern Times) washes over the audience, I found myself moved to non-laughter induced tears.

Might this wonderful production be the recipient of some supernatural good favour in Bath, at the start of a national tour? Perhaps. When the theatre underwent a major refurbishment in 1982, Lady Oona Chaplin donated £8,000 for the house curtains (embellished with the initials ‘CC’) in memory of her late husband Charlie, saying: “We absolutely loved the city of Bath and often attended performances in its beautiful Theatre Royal.” Charlie Chaplin can rest assured that his legend lives on in Bath.