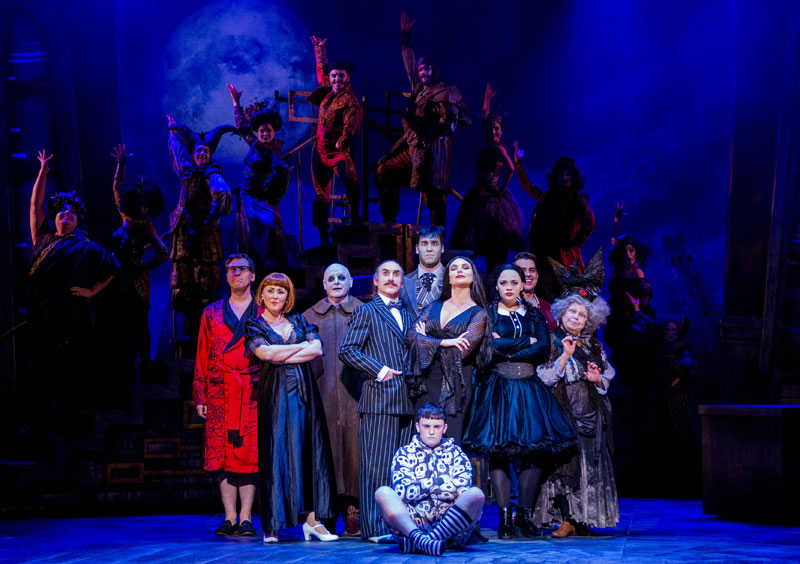 Okay, so they’re a majorly dysfunctional family, on many, many levels. But the Addams clan most definitely got one aspect of consanguinity right, as they’ve stayed together for a very long time. Since American cartoonist Charles Addams’ single-panel cartoons putting the spotlight on, in his own words, “a satirical inversion of the ideal 20th century American family” were first published in the New Yorker back in 1938, not only did a form of parody that was, at the time, regarded as a controversial ridicule of conservative family life set the tone for future contemporary sitcoms (The Simpsons; American Dad; Roseanne; South Park, et al), but the oddball, macabre characters proved to be enduringly fascinating characters with a lot of life to live – despite, rather ironically, their obsession with death.

Numerous TV and film adaptations featuring Addams’ original characters exist, but this most recent outing – surprisingly, the very first Addams Family stage show, which is already a huge global hit and is on its first trip around the UK – is based on the classic Addams’ progenitors, rather than their descendants.

And that, to my mind, is a Very Good Thing – it turns out that I wasted a lot of time dreading an encounter with some sort of lame, trying-to-be-hip Addams’ Family appear on Jeremy Kyle-type pastiche, or The Addams Family: a soap opera. While fans of the gloriously dark, subtly hilarious 1964 TV series may find the overall jolly vibe too incongruous, and those who loved the 1990s film versions might think the slower pace of the stage version a bit plodding, if you take it for what is it – a slick, upbeat modern musical, featuring fabulous costumes, several big dance numbers and a couple of catchy melodies – few will be disappointed.

In a neat little twist on the usual ‘misfit vs conventional life’ dynamic, it’s interesting to see the traditional formula reversed: this time, it’s more ‘normal world vs The Addams’ Family‘, as a wholesome young boy from a super-conventional family threatens to rock the Addams boat by proposing to geeky, gloomy goth Wednesday, daughter of Gomez and Morticia Addams, and all-round bad-time girl.

Against the colourful backdrop of Addams family life (eccentric aristocrats living in a Gothic mansion in the middle of New York’s Central Park), Wednesday’s sweetheart Lucas and his buttoned-up, straight laced parents Alice and Mal Beineke are the ones who look like the out-and-out weirdoes. While Samantha Womack’s Morticia is a little underpowered (at times, the iconic leading lady’s anticipated, vampish va-va-voom seems to have completely left the room), Cameron Blakely as Gomez picks up the pace admirably, bringing wit and character to a role that is, and should be, laden with… well, wit and character.

Dickon Gough is skilfully, subtly enigmatic as zombie butler Lurch (his own spotlight moment, towards the end of the show, is well worth the ticket price alone), Grant McIntyre as Wednesday’s brother Pugsley is as cute as a confused sado-masochist in-the-making gets, and Les Dennis (yes, the Les “our survey says”/Coronation Street Dennis) is just perfect – if utterly unrecognisable – as Gomez’s weird and wonderful brother Uncle Fester, adding his own inimitable little sprinkle of charm to this very different version of Family Fortunes in a surprisingly emotional performance.

And, whether it’s intentional or not, the characters of Mr and Mrs Beineke (Charlotte Page; Dale Rapley), pay homage to the mother of all comically creepy musicals, the Rocky Horror Show – if you ever wondered what kind of couple Brad and Janet might have grown up to be, then look no further.

For the real thrills, meanwhile keep an eye on the omnipresent family spooks, each given their own distinctly different characters (Matador Ancestor; Viking Ancestor; Tudor Ancestor; etc), and all lavishly costumed, perfectly choreographed and often reminiscent of the twerking freaks from Michael Jackson’s Thriller video.

It’s Carrie Hope Fletcher as Wednesday, however, who proves to be the real star of the show: a fearless, feisty adolescent torn between heritage and hormones, girlishness and ghoulishness, responsibility and reckless behaviour – she would most likely hate to be referred to thus, but Wednesday really is totes adorable.

Was there a downside to our evening round at the Addams’ house? Well, it went on a tad too long (of the 18 big musical numbers, only a handful are memorable the morning after), and at times the main thrust of the family’s USP (altogether now: creepy, kooky, mysterious, spooky and, erm, ooky – clickety-click) was more Wicked the musical than properly wicked. But all told, if they were to invite me around again, I’d be there in a non-heartbeat.