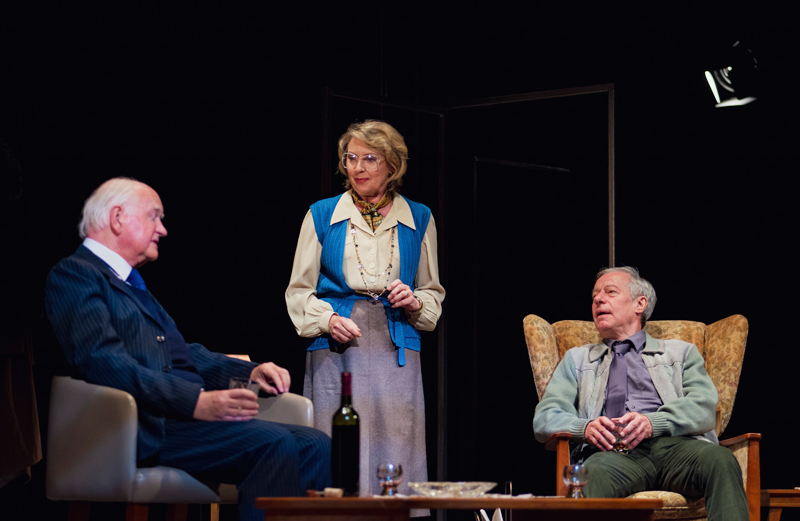 Theatre Review:
A Splinter of Ice

On at the Theatre Royal Bath until 3 July

On February 15 1987, Graham Greene – one of the most highly-acclaimed English novelists of the 20th century – attended a star-studded peace conference in Moscow (glasnost, remember?). Greene took the opportunity to visit his old friend Kim Philby: the double agent who, in 1963, was revealed to be the ‘third man’ in the infamous ‘Cambridge Five’ spy ring (Donald Maclean and Guy Burgess being men one and two, with Anthony Blunt and John Cairncross coming in at four and five.)

By the late 1980s, Greene, himself a former MI6 agent, had forged a massively successful career largely by fictionalising espionage-related subjects, while Philby had spent some 35 years living in exile in Moscow following the exposure of his own real-life adventures in that world. Do you wish you could have bugged the room to listen in on their reunion? Ben Brown’s new play A Splinter of Ice offers the closest we’ll ever get to that, by imagining the conversation that took place.

Oliver Ford Davis is a charming Greene: wry and affable with a slightly world-weary demeanour to match his slightly world-weary suit. Stephen Boxer as Philby offers context and contrast to his friend’s initially more restrained demeanour, occasionally flaunting the sharper repartee and more nimble articulation one would expect from a man 10 years younger than Greene who was, by then, 83.

The vodka (and later, the wine, then the whisky) flows as Philby’s fifth wife Rufa – a largely undemanding role injected with subtle verve by Karen Ascoe – prepares dinner, to her husband’s strict instructions. And Philby has instructions for Greene, too: “no questions!”, he declares, as their conversation begins. But Greene has plenty to ask: when was Philby first recruited by the Russian Intelligence Service? Did Philby once try to commit suicide? Would Philby consider the possibility of returning to the UK if he was offered immunity from prosecution? There’s a big question for the audience to consider too: why did Greene stand by Philby after his defection, when others repudiated him? And are we offered any clear responses to any of these questions? In a word: no.

As the evening slow-dances along, mild tension occasionally sets the scene for possible conflict-to-come, and there’s the odd nod to the possibility that we might be about to learn something about Philby beyond the countless books, films, documentaries, autobiographies and memoirs that already reveal all we thought we needed to know about one of the world’s most enigmatic figures. But Brown’s Greene is all too often more of an upmarket, old-school chat show host (think, a relaxed, attentive Michael Parkinson with a little bit of Terry Wogan’s jovial wit thrown in for good measure) than a writer renowned for being a master of plot lines rich in ingenuity and depth; as a result, we learn more about Philby’s five wives, his daily domestic routines and his blithe acceptance of being under the constant watch of a ‘security guard’ than we do about the undercurrent that’s surely at the heart of the matter – heck, we don’t even find out what what they ate for dinner until the very end of the play. As a result, there’s no pinnacle to the drama; it’s cosy rather than courageous, and too comfortable to allow room for controversy.

When the curtain rises to reveal Philby’s Moscow flat at the start of the play, the theme tune from The Third Man fills the theatre. If you’re au fait with the lyrics to the actual song, this little touch becomes more poignant than droll: “When a zither starts to play, You’ll remember yesterday, In its haunting strain…” Personally, I was hoping for more memories, more haunting, more of the “splinter of ice in the heart” which Greene once described as being the essential attribute of a writer.

In his preface to Philby’s 1968 autobiography My Silent War, Greene expounded on this quote, adding that there’s an icicle in the heart of the spy. By the time Greene says goodnight to Philby and Rufa at the end of their reunion dinner, I left the theatre feeling as though I was a spy who was never quite invited in from the cold.