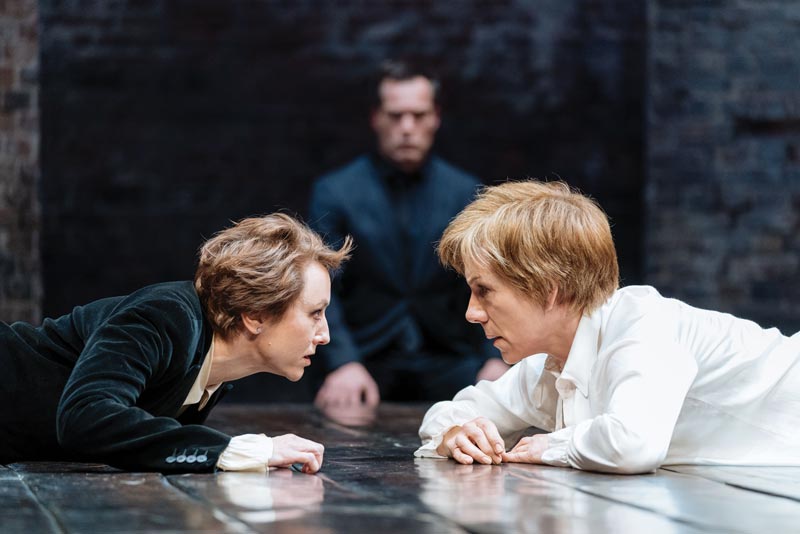 With the simple toss of a coin renowned actress Lia Williams could either be hurled into the middle of the stage, the spotlight beating down on her as she begs for her life, or she will serenely walk off backstage to gather her thoughts for the next scene while her co-star, award-winning actress Juliet Stevenson, is thrown to her knees in front of the audience.

This concept of flipping a coin to decide who will take which lead part has caught the eye of theatregoers and critics alike since this adaption of Mary Stuart first took to the stage at the Almeida in 2016. At the start of every performance, the cast and the audience watch in anticipation to learn whether Williams or Stevenson will play either the ill-fated Mary, Queen of Scots, or her politically astute cousin Queen Elizabeth I.

“It is genuinely frightening. The play is based on the last few days of Mary’s life, so there is a state of anxiety in the air, and the coin toss adds to that. It’s great because the audience feels the same adrenaline to what we’re all feeling onstage,” says Williams.

Based on Friedrich Schiller’s play, first performed in 1800, Robert Icke’s adaption burst onto the theatre scene in late 2016 with a sold-out season at the Almeida before transferring to the Duke of York’s Theatre for a limited run in January 2018, mounting up rave reviews as it went. Direct from the West End, Mary Stuart is coming to Theatre Royal Bath at the start of April, before going on tour to Salford and Cambridge.

While being based on significant historical events, the play focuses on an imaginary meeting between the two queens after Mary is imprisoned by Elizabeth after she attempts to flee Scotland following an uprising against her in 1568. Suspicious of what Mary might do next, and aware of the numerous plots to put Catholic Mary on the throne of England and overthrow the Protestant queen, Elizabeth kept Mary as prisoner for almost two decades. Following evidence that Mary was implicated in a plot against the English queen’s life, Elizabeth eventually signs her cousin’s death warrant and she is executed in 1587 at Fotheringhay Castle. 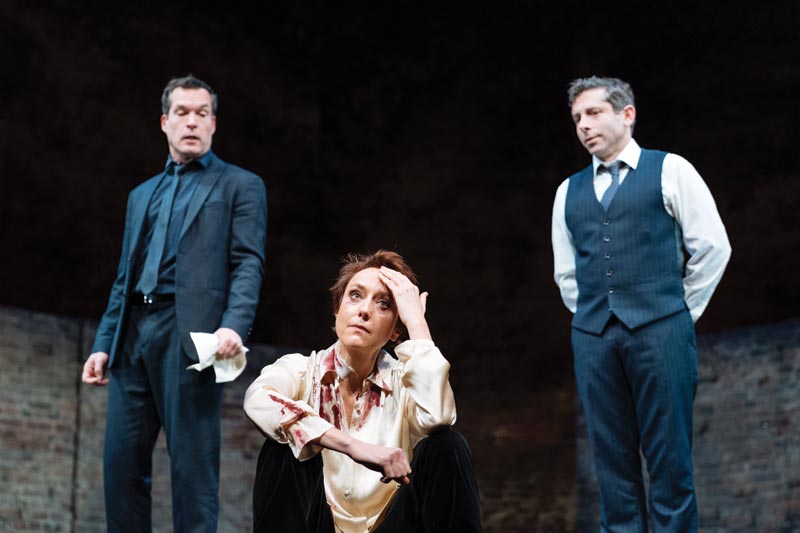 “The director [Robert Icke] has made what could be a dusty history play into one about women in power. It’s a really exciting thriller. This has been a sheer acting challenge playing these two roles, and it is something you really can’t turn down,” says Williams, whose acting breakthrough came when she starred in Alan Ayckbourn’s The Revengers’ Comedies alongside Griff Rhys Jones and Joanna Lumley in 1991. She went on to win the Critics’ Circle Theatre Award for Most Promising Newcomer and was nominated for an Olivier Award for this performance.

More recently, readers might recognise Williams from starring in the Channel 4 drama Kiri, or for playing Wallis Simpson in Netflix’s The Crown.

While Mary, Queen of Scots pleads for her life in her final days, Elizabeth is pressured by her closest political advisors to have her cousin executed, despite this meaning she would be sending an anointed queen, just like herself, to the chopping block.

On the surface, both these queens are incredibly different in character. “Mary is romantic, courageous, and not very politically astute. She makes bad decisions and falls in love with the wrong people. Whereas Elizabeth is caged in, almost Machiavellian, and politically driven. She procrastinates, and she is obsessed with the brand of Elizabeth I,” says Williams.

“What draws them together is that they’re both women in positions of power. But what is interesting is that their experiences could have happened the other way around. Mary could have been queen, if a Catholic rebellion was successful.

“Elizabeth I was never meant to be queen. She shouldn’t have inherited the throne [following the premature deaths of her half brother and sister, Edward VI and Mary I, who did not produce heirs]. She was also seen as illegitimate by a lot of people [many Catholics did not recognise her father Henry VIII’s marriage to Anne Boleyn], and this is at the centre to the play. Mary, Queen of Scots actually has more entitlement to the crown, and yet she is the one who is imprisoned and fighting for her life.” 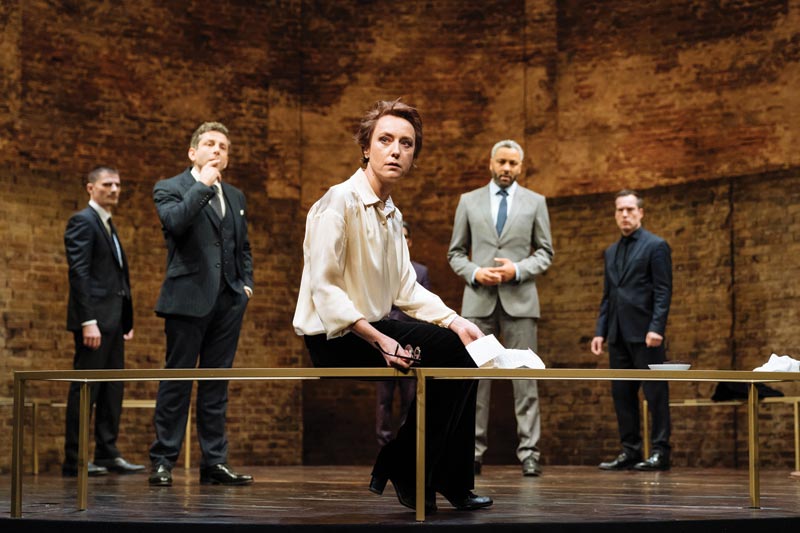 Gender, power, politics and love – these are all topics central to the play that, despite being written at the turn of the 19th century, explores elements that are profoundly relevant to modern day audiences. “These topics are very much in the air at the moment with the #MeToo campaign and the ongoing discussions about gender politics.”

“The themes in the play affect people emotionally. And I think this is down to the brilliance of the director’s writing. You’re not watching a history play about two women in frocks – you’re seeing anguish, and what they have to emotionally battle through. And that really hits the audience.”

And there aren’t any frocks in sight, that’s for sure. Set and costume designer Hildegard Bechtler has stripped back the characters’ costumes; don’t expect lavish Elizabethan ruffs and wigs. While the leading actresses wear matching black velvet suits with short, sharp hairstyles, the male characters wear crisply tailored, dapper suits. “My Elizabeth is like David Bowie … she’s a bit of a rockstar,” she says. “The lack of costumes and props shows the emotional ride, rather than just ‘isn’t that a lovely frock?’”

Tony Award nominated Williams has made a name for herself over the years as an actress who can take risks and turn the biggest onstage challenges into simply sublime performances. Just some of her stage credits include Harold Pinter’s Old Times and The Homecoming in the West End and on Broadway, As You Like It for the Royal Shakespeare Company, and she last came to Bath in 2009 for the tour of God of Carnage, alongside Roger Allam and Richard E Grant.

With such an impressive list of stage credits under her belt, Williams affirms that being part of the Ancient Greek tragedy Oresteia as one of her professional highlights so far. “It was thrilling and the most exciting thing I have done in my career,” she says. The play, which was also adapted by Robert Icke, moved from the Almeida Theatre to Trafalgar Studios in 2015 after audiences lapped up the contemporary take on this ancient, bloody family drama.

“Robert Icke is such an innovative director. He takes great big pieces and makes them incredibly accessible for audiences. I’ve always thought Greek tragedy is incredible, but I’ve never been able to quite access it. But he was able to turn it into absolute sheer drama for the stage – and this is the same with Mary Stuart,” says Williams.

Does she prefer the stage to the screen, I ask? “I absolutely loved every part of filming Kiri recently, and screen work can be exhilarating. But there is something about the live experience on stage. The not really knowing what is going to happen is exciting. And there’s something magical about a play happening on one night, on one stage, in front of one group of people.”

And is Williams looking forward to returning to Theatre Royal Bath? “I’ve got amazing memories of Bath. When I starred in Oleanna by David Mamet with David Suchet, the play went to Bath after the West End [in 1993]. We had a Q&A after a matinee one day and it was the most feisty Q&A I have ever experienced with the most rowdy audience. One woman stood up and announced: ‘I have never felt anger in my entire life.’ But she then pointed at me and declared: ‘But you have made me angry!’ It was absolutely brilliant to see an audience have such an emotional reaction to a play.”

After the tour of Mary Stuart has ended, Williams tells me she has lots of exciting jobs planned that she can’t tell me about just yet. “I’m feeling very lucky at the moment”, she says. Despite learning two leading roles and not knowing who she will be playing every evening, as well as going on tour, Williams surely deserves to put her feet up for a bit. But nothing seems to be stopping this acting powerhouse just yet.