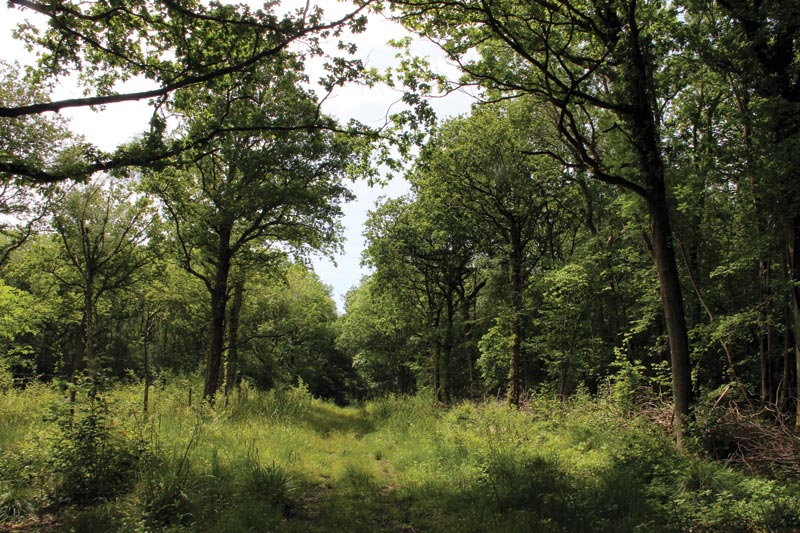 Edge towards the end of April and the bluebells will arrive, carpeting the woodlands with their dusky blue shades. Andrew Swift finds a walk in a 700-acre wood that gives bluebells and an experience of an ancient, tree-filled landscape

Each spring, from around St George’s Day (23 April) to late May, England’s woodlands are transformed as carpets of bluebells come into bloom beneath the canopies of trees.

There are many favoured spots for witnessing this annual spectacle, but for me few compare with Lower Woods in South Gloucestershire, where the azure haze of bluebells is offset by the dazzling whiteness of wild garlic. This 700-acre wood is not only one of the largest areas of ancient woodland in the South West, its terrain is so varied, and so unmanicured, it evokes a sense of remoteness and timelessness. Walking these woods, there is an abiding sense that you are glimpsing what much of medieval England might have looked like.

Having said that, there are what some may regard as several downsides to Lower Woods. The Saxons knew them as horwudu or ‘muddy wood’ and, although the name has changed, the mud remains – fortuitously so, for the heavy clay that turns its tracks to quagmires has made the land useless for cultivation. It also means that, even if the Gloucestershire Wildlife Trust, which manages the woods, wanted to create a network of easy-access, all-weather paths, their efforts would almost certainly be frustrated. Mud, springs and swampy ground are part of Lower Woods appeal, but you need to be well shod to appreciate it.

This is no untrodden wilderness, though. The woods have been coppiced for centuries, and are criss-crossed by a network of once-busy tracks, known as trenches, along with a labyrinth of narrow, winding paths. The word ‘trench’ fell into general disuse around 500 years ago, giving an idea of their antiquity.

Another feature of Lower Woods is the ease with which you can get lost. I am still astonished by how quickly you can lose your way – yet, far from being an inconvenience, this reveals hitherto unknown corners and reinforces that sense of brooding mystery. 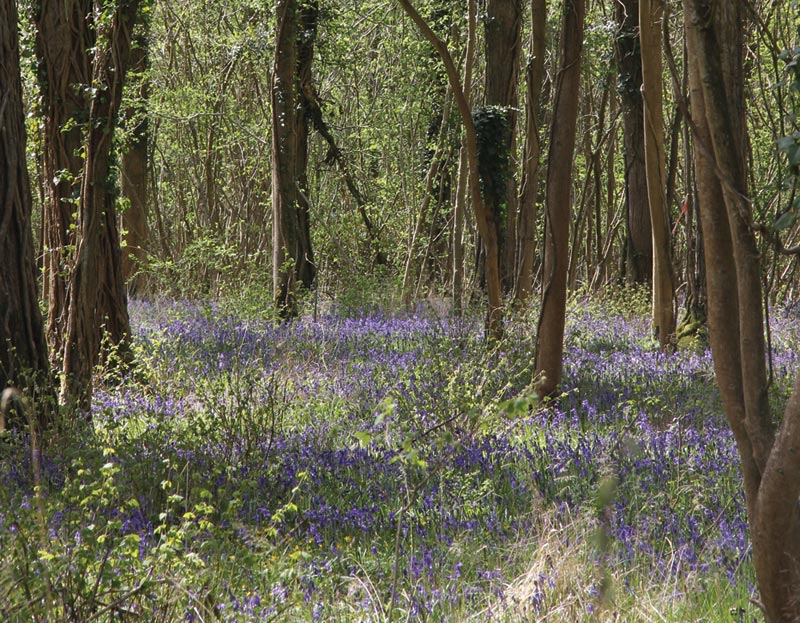 Lower Woods are not only easy to get lost in; unless you know how to get there, they are almost impossible to find, as there is a total absence of signposts. Fortunately, getting there from Bath is straightforward.

Head north from Bath along the A46 and after 15 miles, just past Petty France, turn left to Hawkesbury Upton. Drive through the village and after 1½ miles you will see a large tower ahead. This is the Somerset Monument, erected in 1846 by the Duke of Beaufort. As you pass it, turn left down a lane signposted to Wickwar.

At the bottom of the hill, carry on across a cattle grid. Follow the lane across Inglestone Common before curving through a coppice. Emerging into the open, you will see a building on your left called the Old Shop. Carry on for another 100m before turning left, opposite a wall letter box, along a rough, deeply-rutted track (GL9 1BX; ST749885). After 600m, you come to a clearing with room for about 20 cars (ST746880).

Before exploring the woods, look out for a box by a handgate which should contain leaflets with maps and suggested walks. To aid navigation, numbered waymarks on wooden posts are provided, although, as the numbers are only on one side of the posts, you may have to look hard to find them.

Here you have a choice – to follow one of the waymarked walks or to wander at will. Alternatively, you could, if you’re eager to see the bluebells, try the following route:

Instead of going through the handgate, head to the left and follow a drive to Bucklesbury Farm. After 250m, bear right across a grassy area known as Shepherd’s Knap before dropping down to a bridge over the Little Avon (ST745876). This has no connection with the Avon that flows through Bath, but runs west to enter the Severn at Berkeley. Don’t cross the bridge, but turn left to ford a tributary stream, go through a gate and head up a track known as Littley New Trench.

After a few metres, fork left uphill, and after 100m bear right at a waymark (W59) along a narrow track. After 450m (W55), bear right to double back along a track beside a fence. Carry on as it heads downhill and after 350m follow stepping stones across the Little Avon (W52; ST745872). Head up a muddy track on the other side, bearing left at a fork and left again along a broad track.

After 80m, when you come to a T-junction, bear right uphill and carry on along Long Trench. After 500m, you come to a clearing where four tracks meet (ST743866). Take the one ahead, Musgrave’s Trench, which dips down to a stream before climbing to emerge in an open space (ST740867).

This is Horton Great Trench, probably pre-Roman in origin and once the main route between Bristol and Wotton under Edge. A 13th-century statute decreed that such highways should be 120 feet (37m) wide, to prevent brigands ambushing travellers. As you bear right along it today, however, all that’s likely to impede your progress are some distinctly swampy patches.

After 1,000m – when it divides to go either side of a copse – take the left-hand fork, carry on as it curves downhill and go through a gate. Ahead is the bridge you saw earlier (ST745876). You can, if you wish, cross it to retrace your steps to the car park, but a more attractive option is to bear left before the bridge, go through a gate into Wetwood Nature Reserve and follow a track winding alongside the Little Avon. This rocky track is steep and muddy at the best of times, but several trees have fallen across it during the winter, and, until cleared away, pose an additional challenge.

After 400m, you come to a wooden bridge (W31; ST741877). You can carry on, but follow the river downstream along ever more vertiginous tracks through the steepening valley, you eventually come to the end of the woods where you need to retrace your steps.

After crossing the bridge, head up a steep track and carry on for 300m, before turning right along Plumbers Trench (W15; ST741881) to return to the car park.

Andrew Swift is the author of On Foot in Bath: Fifteen Walks Around a World Heritage City and is co-author, with Kirsten Elliot, of Ghost Signs of Bath.