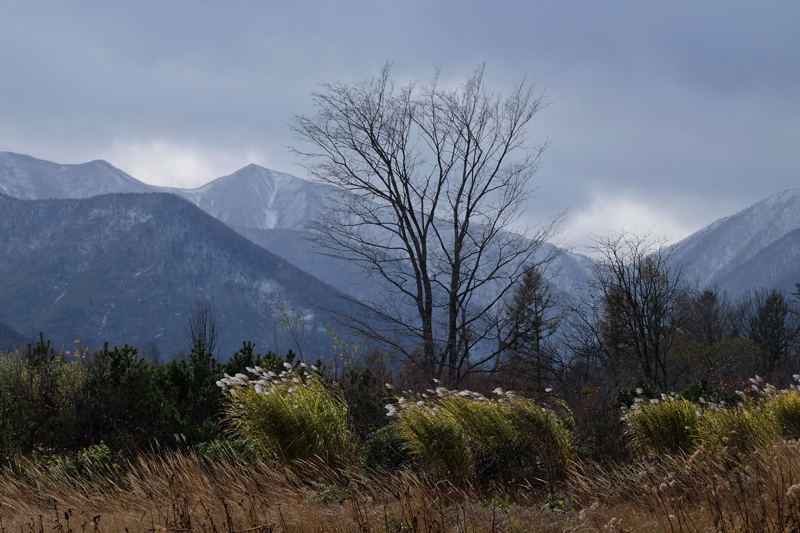 Twenty years ago, Dan Pearson was invited to make a garden at the 240-hectare Tokachi Millennium Forest in Hokkaido, Japan. Tuning into the physical and cultural essence of the place, the world-class designer created somewhere with its heart in Japan’s long-held respect for nature and its head in contemporary ecological planting. These excerpts from the recently published book focus on the Meadow Garden, and its creative mixture of garden and native plants

Finding your own wild, by Midori Shintani, head gardener of Tokachi Millennium Forest

As can be seen in the expression ‘plants and trees all have something to say’, the ancient Japanese revered nature and had a deep affinity with plants. In the oldest Japanese poems composed in the 8th century, we can meet our ancestors and sense that in their appreciation of plants they found the beauty of evanescence. Finding a brilliance and grace to look on flowers in full bloom, at the same time embracing a sense of transience and mutability, we find a beauty in flowers destined to fall soon. Tiny, delicate changes in sky, wind, light and every element of nature occur around us through the year. Responding sensitively to such natural phenomena, the ancient Japanese calendar of 72 seasons developed. In literature, paintings, ikebana and gardens, all Japanese art culture springs from aesthetics based on the appreciation of plants and the view of nature.In the Millennium Forest, we cherish this traditional Japanese view of nature in nurturing our modern garden. Celebrating every stage of a plant’s growth enhances the bountiful natural beauty in the garden. From shooting to flowering and then fruiting, plants show us various expressions and individualities. Our hands convey the characteristics of the plants and represent the underlying aesthetics of the garden. How to draw seasonal changes from the plant combinations has a great influence on the atmosphere of the garden. We regard the ‘rustic beauty’ drifting in the air of the garden. This idea is united in all our works of plant selection, plant setting, timing of seasonal maintenance, plant displays and so on.

Nurturing an eye for delicate change in plants and the season is something that I have learned from the 72 seasons. ‘The earthworms rise’, ‘the plums turn yellow’, ‘white dew on the grass’ – this ancient Japanese calendar lets us realize that we live for just a moment. The eye for the season extends to our arrangement table. We collect pieces of what we are moved by or discover in the garden and arrange flowers, foliage, fruits and vegetables to share with other people. For us, the act of arranging flowers is a dialogue with nature. In the Meadow Garden, designed with a naturalistic planting style, the setting and quantity of each plant and the timing of maintenance are carefully determined. Especially we place emphasis on taking the balance of the planting mixes through thinning, replanting and replacing with new plants.

Plants in the Meadow Garden, by Dan Pearson, landscape designer

The richness of the forest floor on Hokkaido is almost overwhelming when you encounter it for the first time. Plants that you have treasured as ‘exotics’ back in the West grow wild there in the way they were meant to – not as solitary specimens, but happily in company. Arisaema and anemone, palest pink meadowsweet and the finest thalictrum; hostas standing tall and muscling for their position and lofty daylilies hovering on wiry stems in the shadows.

Although, as a Westerner, it is unlikely that I will ever take this floral diversity for granted, I wanted to make sure that the familiarity of the local vegetation was also thrown into a new light for Japanese visitors. The Meadow Garden was to provide this opportunity. By juxtaposing the best of the native plant material with plants selected in the West for their garden worthiness I hoped to reframe the native plants. The wild hostas would sit alongside new partners to show them to best advantage and the hemerocallis that had nodded quietly in the Entrance Forest would reappear centrestage in the new light of a garden setting.

When selecting non-natives, we looked to areas of the world that share a similar hardiness rating to Hokkaido’s Zone 4, which is equivalent to USDA Zone 5 and equates to an average minimum winter temperature of -29 to -23°C (-20 to -10°F). Areas of Northern Europe, Eurasia and Northern America provide similar conditions, with four distinct seasons and an extended period of winter dormancy. We were also careful to choose plants that were not known to be invasive and had a proven track record in terms of garden performance. The majority were selected for long-term stability with the aim of building reliable and long-lived partnerships between plants to once again emulate the systems in the plant communities that have evolved over decades on the forest floor. Short-lived self-seeding perennials such as Knautia macedonica were included for their pioneering habits and ability to respond quickly to change.

In terms of ethos and aesthetics, it was important that all the plants we introduced were in the spirit of the vegetation that already existed on site. Everything was selected to have a natural appearance that would not look out of place alongside the natives. The choices were limited to either straight species or named forms that were close to the species. Flowers remained small or uncomplicated, with no doubles that felt highly bred or made pollination difficult. The planting was carefully selected so that it was tonally right, taking the lead from the foliage shapes and colouration of plants in the forest and often looking to equivalent plants that occur both in Japan and North America. Though I was deliberately heightening the intensity of the aesthetic in the Meadow Garden, I wanted the plants from overseas to feel as if they were meant to be in each other’s company when combined with the Japanese natives…

The garden was planted, as planned, in the spring of 2008, so one of my key tasks when I first met Midori was to explain that the garden was intended to be an echo of a natural environment. We walked into the forest and looked at the natural plant associations, the succession and the layering from the ground up to the tallest emergents.

It was summer and already the first layers of trillium and anemone were going into dormancy beneath the mid-storey plants. Carex and filipendula were filling out to cover for the first ephemerals and rising up tall were stands of cardiocrinum and angelica. We discussed the importance of the Entrance Forest and the Meadow Garden being in easy dialogue and the influence of the native plant communities upon the workings and the aesthetic of the Meadow Garden.

We also touched on the realities of maintaining something that was designed to evolve and would not, by definition, be something we could entirely plan for. Our yearly meetings and email communications help in steering the direction and we have responded to the planting as gardeners, since we are not ecologists, but always with an eye to letting the planting lead the way. Of course, there have been challenges, because in truth the complexity of a real meadow is far more dynamic. Just 1sq m (11sq ft) might contain 20–30 species and the competitive nature of the ecosystem is consequently self-monitoring.

…As the garden has evolved in its first ten years, we have been able to see what is working and what is struggling. Having reached a point where the original mixes had generally achieved an equilibrium, we have since been adjusting and augmenting the plantings to make them work harder…

The mixes respond differently from year to year to climatic changes that favour or discourage a particular species. Natural life cycles also assert their peaks and troughs and our annual walks in the garden help us to decide how to steer the garden in the coming year. The climate also encourages a fast turnaround. Plants such as Salvia nemorosa ‘Caradonna’, though perfectly hardy, need adding to every year since their natural life cycle on Hokkaido is around three years rather than the five we can expect in the UK before they need replacement or division. The short-lived plants such as Knautia macedonica are treated like biennials and allowed to seed into gaps, with the oldest plants removed as they start to splay. They are worth this effort for their summer-long display of flower. A small number of Echinacea ‘Hot Summer’ have also been added to add drama as you enter the garden from the bridge. Though the red echinaceas tend not to be reliable perennials, they prove their worth with ornamental impact, and so are replaced year on year. Such additions to the mixes and responsiveness to the ebb and flow keep the mixes feeling vital and yearly change prevents the garden from ever feeling static.

Tokachi Millennium Forest, by Dan Pearson and Midori Shintani, published by Filbert Press, £40, is available from Topping & Company – who have signed copies – and all good bookshops; toppingbooks.co.uk